Make EUR/USD great again – the world's most popular currency pair is finally moving rapidly and hitting levels last seen 31 months ago after a long period of frustration in the past. What is behind the move and where next?

Three reasons for the EUR/USD breakout

1) Vaccine hopes: Pfizer and BioNTech were the first to report high efficacy in a Phase 3 coronavirus immunization trial on November 9. Since then, additional updates from that project and also from Moderna, AstraZeneca and Novavax have been flowing. The next moves come from regulators – which are set to approve a jab as early as this week – and then the first injections. The news has been pushing the safe-haven dollar down and every update helps convince skeptics that "the cavalry is coming."

The European Central Bank and the Federal Reserve are both set to expand their bond-buying schemes – yet these developments have opposite effects on the underlying currencies. Since the pandemic broke out, ECB stimulus has been seen as supporting the eurozone's recovery by allowing governments to spend more. In the US, dollar-printing by the Fed triggers a broad risk-on mood that pushes the greenback lower. These reaction functions are a win-win for the euro.

3) Political certainty for a change

The US elections are over and there is a decisive winner – Joe Biden. While outgoing President Donald Trump continues crying foul, his attempts at overturning the elections are futile and investors are pricing out concerns about a contested election. Moreover, the nomination of Janet Yellen as Treasury Secretary is also reassuring. The former Fed Chair supports fiscal stimulus but is pro-trade.

Another potential political development is an upcoming Brexit deal. At the time of writing, the EU and the UK have entered a "tunnel" – intense talks that are set to result in a written accord. Even without an imminent deal, Brexit will soon be over.

After years of uncertainty, the mix of political hope, large stimulus and an upcoming solution covid all boost sentiment and weigh on the greenback. 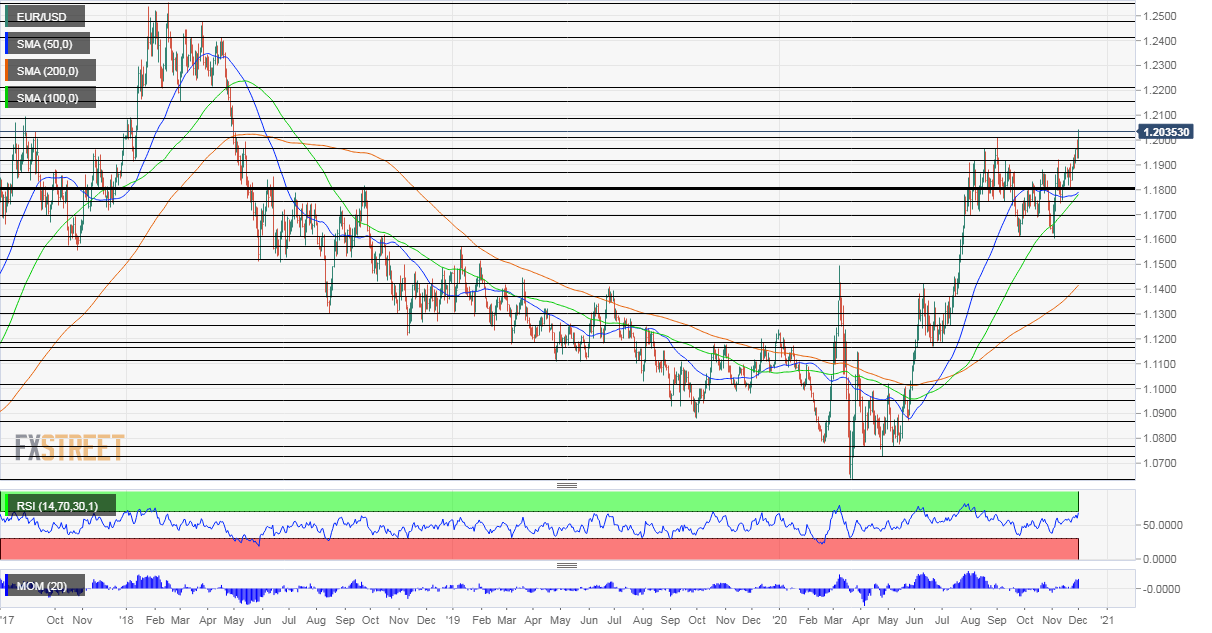 Euro/dollar has surpassed 1.2050 at the time of writing. It is already eyeing 1.2080, which was a temporary cap in late 2017. The next level to watch is 1.2150, which provided support around April 2018. More stubborn resistance is at 1.2210, which cushioned the currency pair more than once in February and March that year.

Further above, there is little resistance all the up to 1.24, which held EUR/USD down before the crash in the spring of 2018. That year's peak of 1.2550 is the upside long-term target.