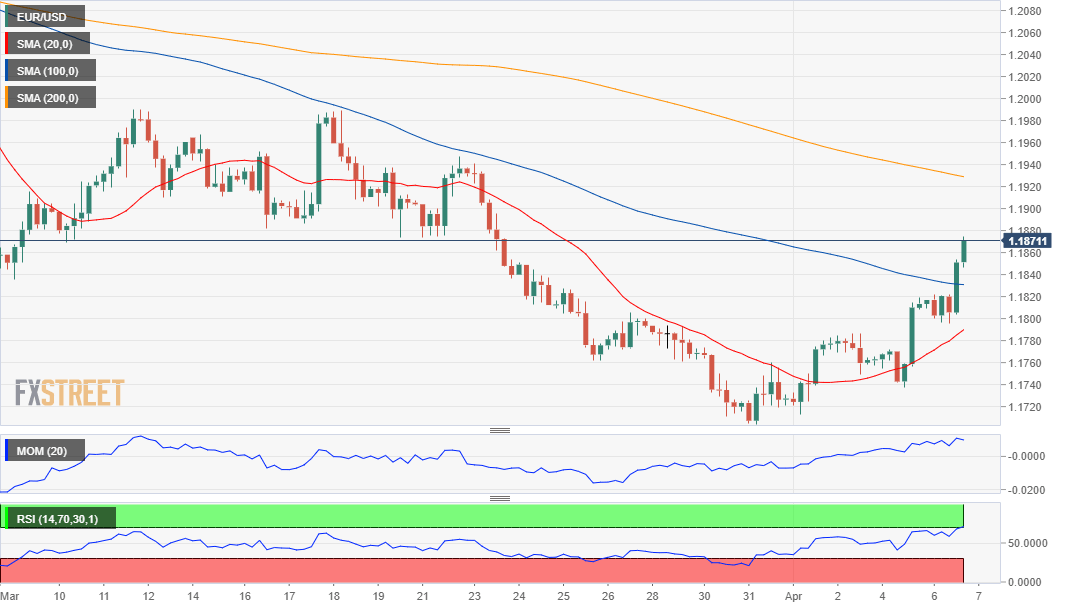 The American dollar extended its slump this Tuesday, with EUR/USD hitting 1.1873, its highest in two weeks. The pair fell at the beginning of the week as news from China spurred some risk-aversion, but the positive mood resumed with London and accelerated in US trading hours, with government bond yields falling sharply and dragging the greenback alongside.

The EU published April Sentix Investor Confidence, which printed at 13.1, much better than the 7.5 expected. The unemployment rate in the EU remained at 8.3% in February, missing the expected 8.1%. The US released April IBD/TIPP Economic Optimism, which printed at 56.4 and an encouraging February JOLTS Job Openings, as it came in at 7.367 million.

This Wednesday, Markit will publish the final version of March Services PMI for the EU and the US, while the latter will unveil its February Trade Balance, foreseen at $-70.5 billion. During the American afternoon, the Federal Reserve will publish the Minutes of its latest meeting.

The EUR/USD pair trades near the mentioned daily high, having turned bullish in the near-term. The 4-hour chart shows that the price has extended above its 100 SMA for the first time in over a month, while the 20 SMA heads higher below it. Technical indicators have continued to advance, the Momentum maintaining its bullish slope and the RSI currently consolidating around 72.