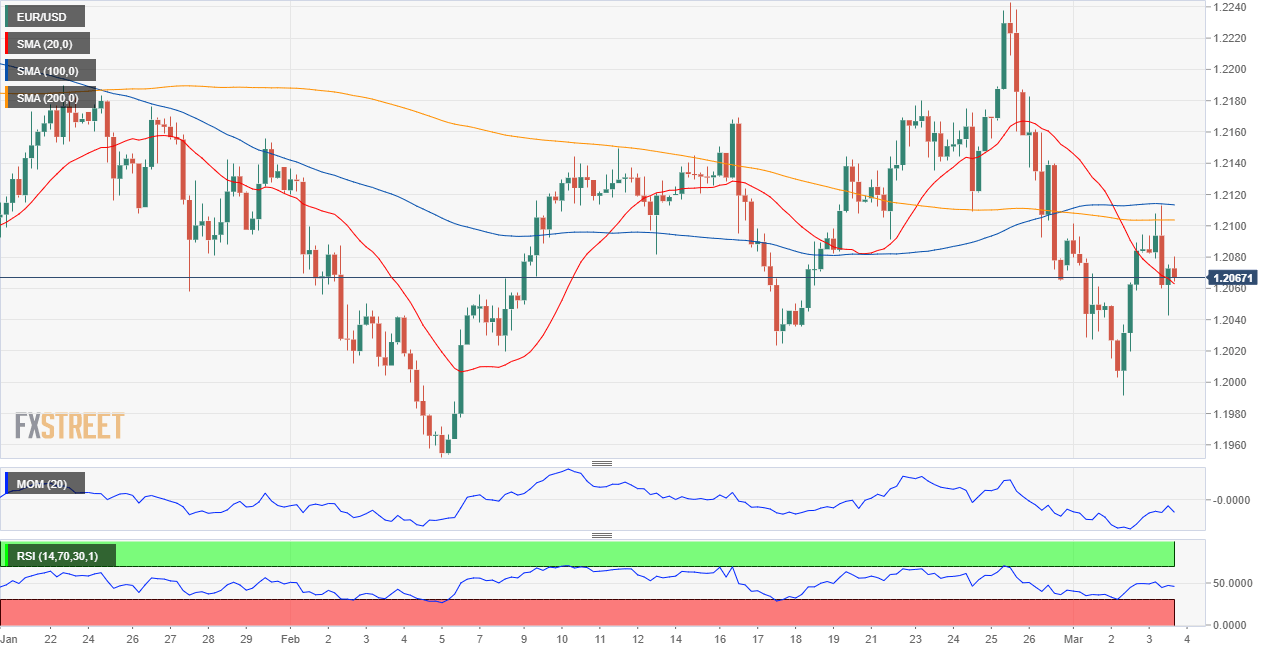 The EUR/USD pair edged lower after hitting an intraday high of 1.2112, as US government bond yields resumed their advances ahead of Wall Street’s opening.  The pair bottomed at 1.2042 during US trading hours, as government bond-yields resumed their advances while equities fell. However, Wall Street bounced off lows, which in turn lifted the dollar’s rivals.  Meanwhile, the European Central Bank reportedly sees no need for drastic action to curb recent developments in the bond market, according to officials familiar with discussions. Yields rallied after such a headline.

Markit published the February final Services PMIs for the euro area, which showed that output in the sector remained in contraction territory, declining for the sixth consecutive month. The German index was downwardly revised to 45.7, although the final EU figure printed at 45.7, slightly better than previously estimated. The US figure beat expectations, as it printed at 59.8 from 58.9 in January.  The official US ISM Services PMI disappointed as the index contracted to 55.3 from 58.7, while the ADP survey showed that the private sector added 117K in February, missing the market’s expectations.

On Thursday, the EU will publish January Retail Sales, seen down by 1.1% MoM and declining by 1.2% in the year-on-year comparison. The US will publish employment-related data ahead of the Nonfarm Payroll report to be out on Friday.

The EUR/USD pair is hovering around 1.2060, struggling for direction. In the near-term, the risk skews to the downside, although the pair needs now to fell below the 1.2015 support to confirm another leg south. In the 4-hour chart, the pair met sellers around converging 100 and 200 SMAs, now around a bearish 20 SMA. In the meantime, technical indicators lack directional strength within neutral levels. An advance beyond 1.2120 could favor a short-term advance towards the critical 1.2170 resistance.

Cathie Wood of ARK Invest fame clearly likes the crypto space as her ARK Invest fund purchased $246 million worth of COIN on the first day of trading.