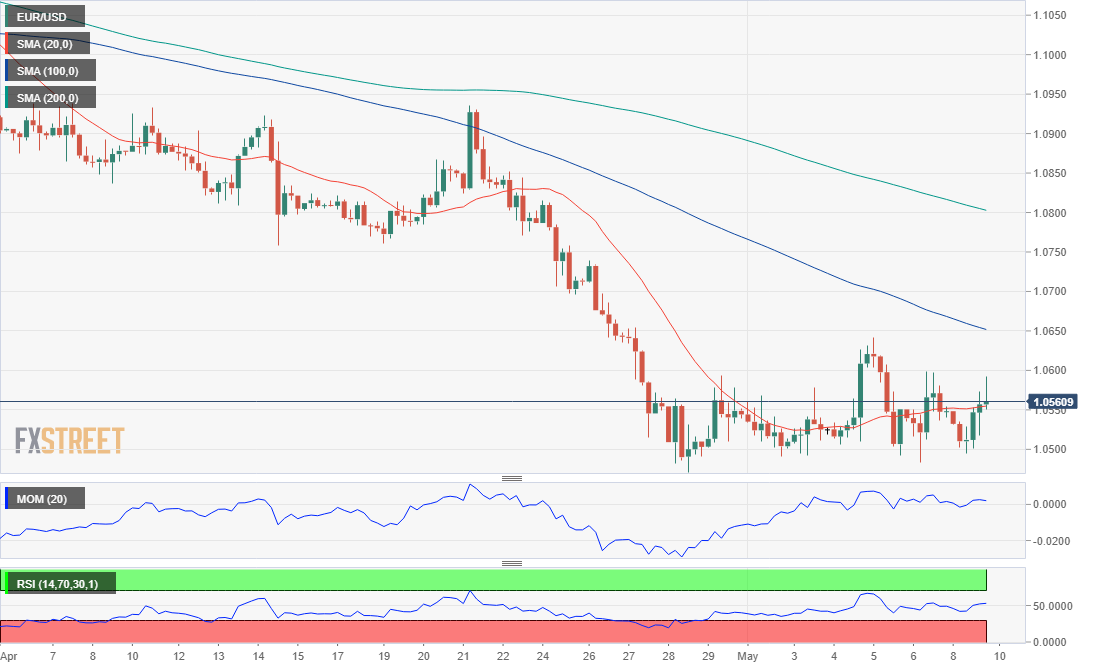 The EUR/USD pair started the day on the back foot, falling to 1.0494, but later advancing up to 1.0592. It finally stabilized in the 1.0560 region, where it stands ahead of the Asian open. The main market driver was inflation, as concerns about persistently high price pressures boosted government bond yields and underpinned the greenback.

European and Asian indexes closed in the red, while Wall Street opened with sharp losses, maintaining the negative tone at the end of the session. The American dollar, in the meantime, seesawed alongside government bond yields. The yield on the 10-year US Treasury note jumped to 3.20%, its highest since 2018, later easing towards its daily low around 3.07%.

The macroeconomic calendar was scarce, as the EU published May Sentix Investor Confidence, which plummeted to -22.6 from -18 in the previous month. The US, on the other hand, released March Wholesale Inventories, up 2.3% as expected. On Tuesday, Germany will publish the May ZEW survey, expected to show a drop in Economic Sentiment, while the US will only release minor figures. Speculative interest awaits German and US inflation figures, to be released later in the week.

From a technical point of view, the EUR/USD pair is in a consolidative phase, not far from the year low at 1.0470. According to the daily chart, the risk remains skewed to the downside, as the pair keeps developing below bearish moving averages. Additionally, technical indicators remain within negative levels, lacking directional strength.

The near-term picture is neutral-to-bearish. The 4-hour chart shows that the pair is hovering around a flat 20 SMA, while the longer ones maintain their firmly bearish slopes far above the current level. At the same time, technical indicators have recovered towards their midlines, although the RSI has already turned lower, suggesting the lack of buying interest.