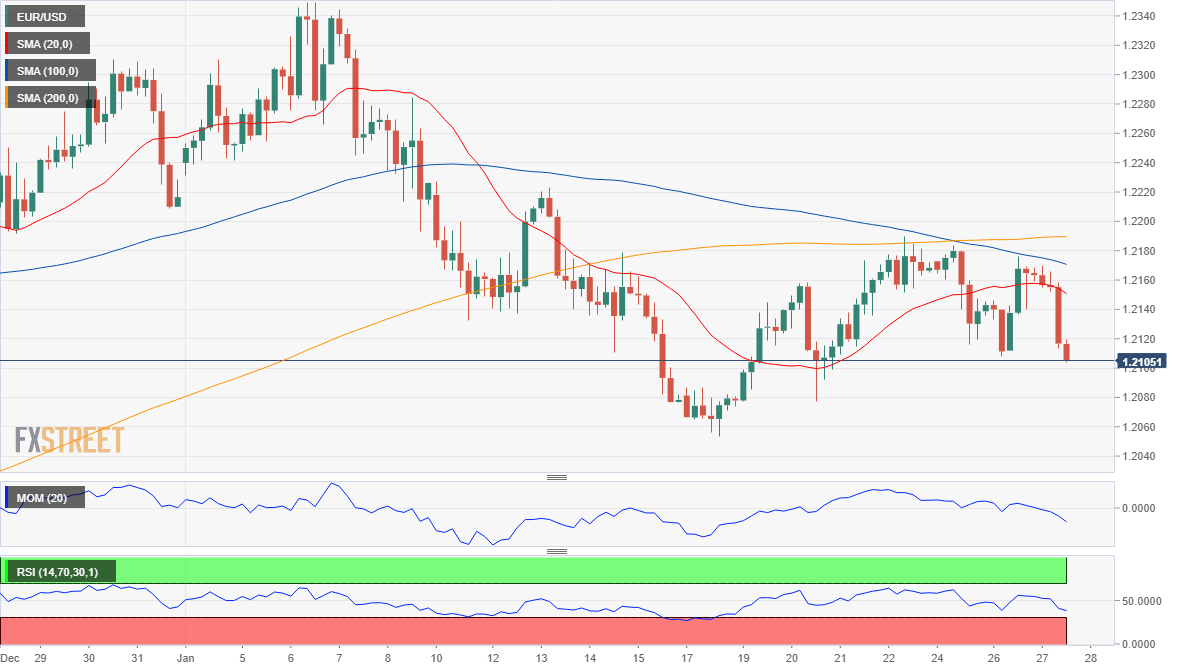 The EUR/USD pair is plunged mid-European session, following comments from ECB’s Government Council member, Klass Knot. He said that the central bank could decide to cut its deposit rate further below zero if that proved necessary to keep its inflation target in sight, adding that the ECB has tools to counter the EUR’s appreciation if needed, in an interview with Bloomberg TV. His words spurred risk aversion, with the greenback making the most of it, appreciating against all of its major rivals.

Germany published the GFK Consumer Confidence Survey, which contracted to -15.6 from -7.5. As for the US, the country has just released December Durable Goods Orders, which were up by a modest 0.2% in December, well below expected. The sour headline further fueled the dismal market mood, with the dollar retaining its strength and Wall Street plummeting ahead of the opening.

The focus shifts to the upcoming Federal Reserve’s announcement. The central bank is having a monetary policy meeting and will unveil its latest decision later today. Policymakers are expected to maintain the current policy unchanged and remain open to speed up stimulus if needed.

The EUR/USD pair is about to challenge the 1.2100 level and firmly bearish in the near-term. The 4-hour chart shows that it has accelerated its slump below all of its moving averages, with the 20 SMA gaining bearish strength below the larger ones. Technical indicators head firmly lower within negative levels, supporting further slides ahead. A critical support level is 1.2060, where the pair has the 38.2% retracement of its November/January rally.

EUR/USD advances towards 1.2200 amid US dollar weakness

EUR/USD nears 1.2200, sitting at fresh monthly highs as reflation trade weighs on the safe-haven US dollar. However, the further upside could remain elusive amid surging Treasury yields. US stimulus news, GDP reported awaited.

GBP/USD stays on the front foot above 1.4150 ahead of Thursday’s London open. The cable benefits from broad-based US dollar weakness, as the reflation wave lifts the appetite for riskier assets. Focus on key US data.