Speculation that the US Federal Reserve could cut rates dominated the week, leading to dollar losses against most major rivals, and helping the EUR/USD pair hit a ten-week high in the 1.1330 region. Escalating trade tensions weigh on the economic outlook, not only in the US, but Fed officials made some twists to their language that made dollar bulls hit the brake.

St. Louis Fed's head, Bullard, through the first stone by saying that a rate cut 'may be warranted soon' although Bullard is a well-known dove. Then it was the turn of New York's Williams, who acknowledged that financial markets are pessimistic over the economic outlook, although he declined to comment on further moved.

Chief Powell added fuel to the fire by saying that the central bank is prepared to act to sustain the economic expansion if the trade war weakens the economy, dropping any mention for the need to be 'patient.'

The ECB had a monetary policy meeting this week, and, opposing to a clearly dovish stance from its overseas counterparts, the message from the EU policymakers was mixed. The European Central Bank left rates unchanged as expected, but head's Draghi sounded optimistic, noting that growth in some sectors remains resilient. Furthermore, he gave details about the new round of TLTRO, setting a relatively high interest rate for the new funding scheme that benefits banks and financial institutions. The ECB also pushed back the horizon for a potential rate hike to H1 2020 and referred to the risks related to global uncertainty and slowing growth related to trade tensions. Growth and inflation forecasts suffered minor revisions for this year and the next ones.

US President Trump's decision to impose tariffs on all Mexican goods triggered some frantic negotiations between the two countries, and despite 'progress' has been reported, there has been no deal and tariffs will come into effect as soon as next Monday.

Another bullish catalyst was the US Nonfarm Payroll report, which disappointed in all of its lines. The country added just 75K new jobs in April vs. the 185K anticipated by analysts. The unemployment rate remained steady at 3.6%, but because of a decline in the participation rate to 62.8%. Wages' growth was below the market's expectations, up by 0.2% MoM and by 3.1% YoY. The previous month jobs' creation was downwardly revised to 224K from 263K. The news fueled speculation that the Fed is getting closer to cut rates, with the CME Group FedwWatch tool seeing now about 75% chance of a Fed rate cut in July.

These upcoming days, the macroeconomic calendar has not much relevant to offer, with the main focus being the US Federal Reserve's monetary policy decision later this month. The most interesting news in terms of moving currencies are the US and German final inflation figures for May. Softer-than-anticipated CPI data would fuel speculation central banks will proceed with more stimulus/rate cuts. The US will also release May Retail Sales, seen bouncing after April's slide.

The EUR/USD pair holds at a higher ground ahead of the weekly close, and more relevant, above the daily descendant trend line coming from September 2018 monthly high. The weekly chart shows that it also settle above its 20 SMA for the first time since March but also that it remains below the larger ones. Technical indicators in the mentioned chart have turned higher, with the Momentum indicator still below its 100 level, and the RSI indicator currently at around 50, falling short of confirming a bullish extension ahead. The case will be firmer in the long run if the pair extends its advance past 1.1460 this week.

In the daily chart, the pair is above its 100 DMA for the first time since mid-March, with the 200 DMA in the 1.1360 region providing a dynamic resistance for the upcoming days. Technical indicators in the mentioned chart head sharply higher within positive levels, skewing the risk to the upside as long as the pair holds above the broken trend line, this last at around 1.1280. 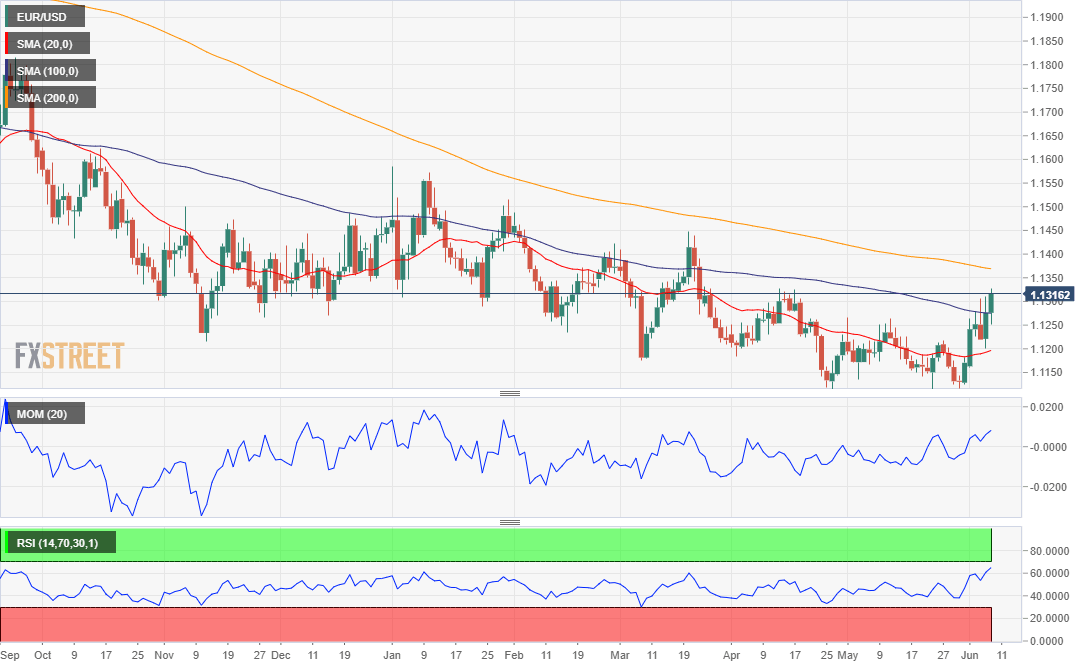 According to the FXStreet Forecast Poll, that the market has run ahead of itself, with the greenback seen generally weaker against most major rivals. In the case of the EUR/USD pair, however, the weekly average target is below the current price, at 1.1314. Bears in such a timeframe account for a 47%, rising to 79% in the monthly view when the pair is seen around 1.1187. Bears retain the lead in the three-month view at 59% and with an average target of 1.1217.

The Overview chart shows that, in the short term, most targets are around the current level, meaning speculative interest hesitates about pushing the pair further up. In the monthly view, however, the bullish case loses supporters, while the moving average in the 3-time perspective remains directionless, also signaling a strong absence of trend definitions.