Taking over – German Chancellor Angela Merkel has been losing patience with attempts to curb the spread of COVID-19 and may centralize powers. The veteran leader is frustrated with Germany's states' actions and is reportedly considering a night-time curfew-like in parts of neighboring France.

In the meantime, Paris is contemplating slapping its own new restrictions as infections advance at an alarming pace and threaten to overwhelm hospitals. The issues of Europe's largest countries come as the EU is struggling to ramp up its vaccination campaign. Late last week, the EU's leaders authorized Brussels to impose export bans on vaccines but seem hesitant to use them.

On the other side of the pond, the US immunization campaign continues accelerating, with some speculating that the US may soon have a glut of jabs. Investors are also awaiting President Joe Biden's speech on the economy due on Wednesday and potentially encouraging jobs figures due out on Good Friday.

More: Nonfarm Payrolls and Biden set to deal another blow to virus-ravaged euro

On Monday, the dollar benefits not from America's recovery but rather from safe-haven flows. The liquidation of Archegos Capital, a leveraged hedge fund, is set to cause significant losses to several banks. A late sell-off in stocks that the firm held may be followed by additional jitters as trades were leveraged and may still have ripple effects.

EUR/USD bulls may find solace in the uncorking of the Suez Canal. Authorities in Egypt have been able to refloat the Ever Given, whose blockage paralyzed the critical waterway. Some 12% of global trade passes through Suez and its closure for six days resulted in the amassing of 450 vessels.

All in all, while the market mood may improve and perhaps limit dollar gains, the euro is under growing pressure. 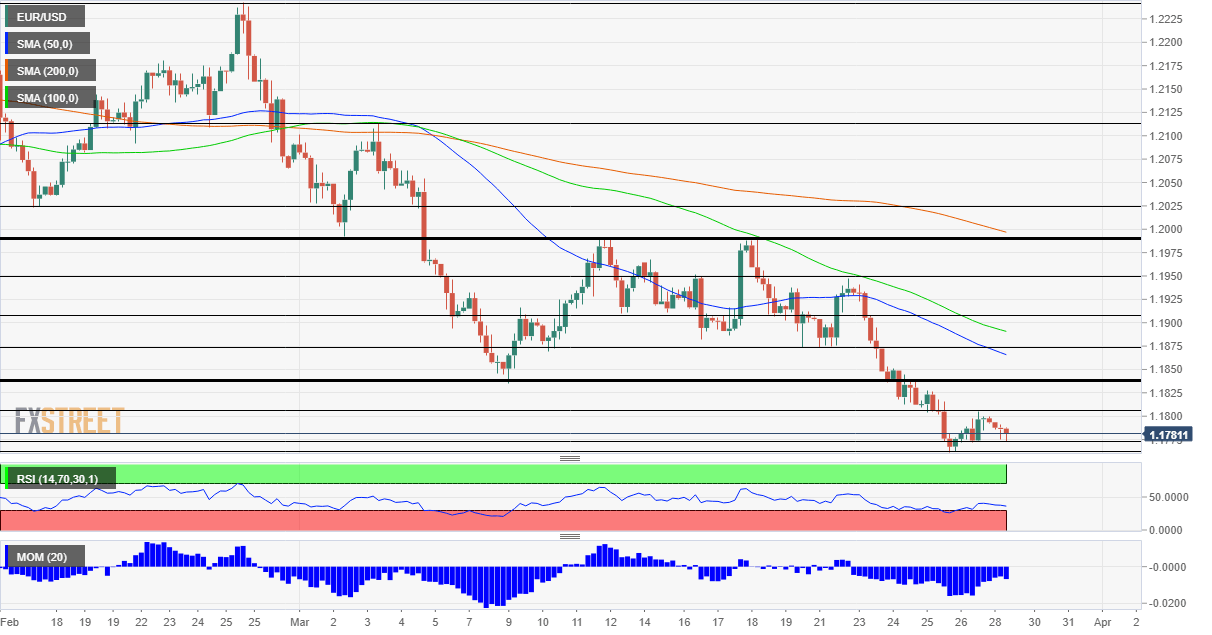 Euro/dollar is trending lower, with minor bounces after hitting new lows. Momentum on the four-hour chart is to the downside the Relative Strength Index is above 30 – outside oversold conditions. All in all, bears are in the lead.