Whoever did not want Yellen at the Fed, will get her as Treasury Secretary – and she is set to move markets even before entering office. President-elect Joe Biden has nominated former Federal Reserve Chair Janet Yellen to lead his economic team and her intentions are closely watched.

In prepared remarks, she stressed that now is the time to spend and stimulate the economy suffering from the COVID-19 pandemic, in line with Biden's $1.9 trillion proposed relief packed.

How will large expenditure be paid for? Yellen is a well-versed in testifying before Congress and may prefer to dodge the question at this point in time. However, if she attempts to answer, it would move markets.

One way to pay would be raising taxes. Biden already said that "everybody should pay their fair share" and signaled closing loopholes and hiking taxes on the very rich. While such moves would not hurt the majority of Americans, Wall Street would shudder and stocks could reverse their gains. In such a rick-off scenario, the safe-haven US dollar would gain and the recent bounce in EUR/USD would prove a dead cat bounce – only a minimal upward move followed by a fresh free-fall.

On the other hand, Yellen is familiar with another mechanism of funding the government – bond-buying by the Federal Reserve. While she presided over the tapering down of the Fed's purchases and even squeezing the balance sheet, Yellen fully supported the efforts of her successor Jerome Powell to scoop up debt in the covid crisis.

Spending is necessary due to the current situation and is made easier by cheap borrowing costs. If the former Fed Chair points to low yields when asked about funding the stimulus, markets may interpret it as a sign that no new taxes are coming  – positive for risk.

Moreover, some may interpret any leaning on cheap funding as a hint that Yellen is already working with Powell – that perhaps she knows of an upcoming expansion in the bank's bond-buying scheme. The Fed buys around $120 billion/month. The current Fed Chair put an end to talk about an early reduction of buying bonds, but he seemed reluctant to raise it either.

Overall, if Yellen focuses on low borrowing costs, the dollar could fall and EUR/USD may extend its rebound.

Apart from Yellen's testimony, coronavirus continues raging on both sides of the Atlantic. German Chancellor Angela Merkel is contemplating not only extending the lockdown but also tightening it. Italy's Prime Minister Giuseppe Conte is facing a crucial vote of no-confidence in the Senate after surviving one in the lower chamber.

The US continues registering an average of near 4,000 coronavirus deaths per day. However, while America's vaccine rollout has somewhat picked up speed, it remains sluggish in Europe, causing frustration. The German ZEW Economic Sentiment indicator is set to show optimism about the future, but a dire situation at the moment.

Outgoing President Donald Trump is set to issue pardons in his last full day in office, but will probably not shake markets. Investors remain somewhat concerned of violence around Biden's inauguration, following the attack on the Capitol two weeks ago.

All in all, Yellen is left, right and center, with everything else playing second fiddle. 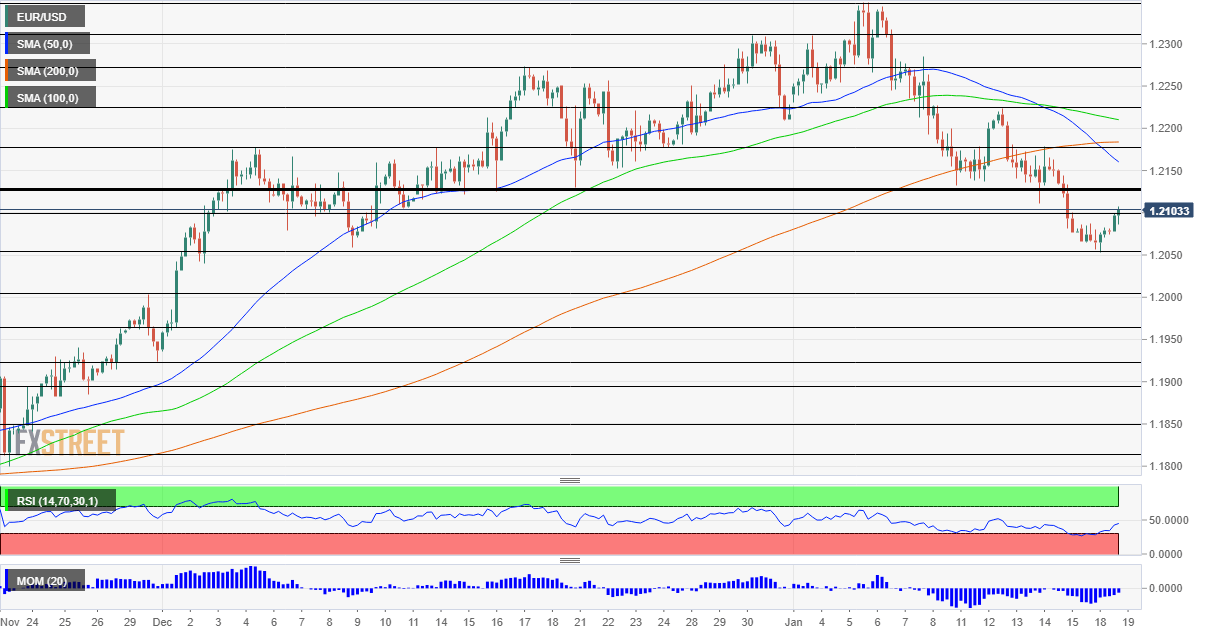 Euro/dollar continues trading below the 50, 100, and 200 Simple Moving Averages on the four-hour chart, a bearish sign. Momentum remains to the downside and the Relative Strength Index has emerged from sub-30 levels indicating oversold conditions.