The EUR/USD pair hit a weekly high of 1.1008, triggering some enthusiasm among speculative interest about the pair finally waking up. It was short-lived though, as the pair quickly retreated from the level, to end the week around the 1.0900 level.

As it has been happening lately, the sentiment was the main market motor. The mood fluctuated on the back of two main issues. Progress around the coronavirus pandemic, and renewed tensions between the US and China.

Major economies have slowly started to reopen, although easing restrictive measures remains slow and painful. Most leaders agree on the fact that the crisis is far from over. They won’t hesitate on toughening measures should the number of cases increase. The world needs to learn to live with the virus until a vaccine is found, or 70% of the population gets antibodies. Despite news of progress in some vaccines and treatments, the road ahead is still too long. In the meantime, economies continue to deteriorate.

These last few days, both central banks, the Fed and the ECB, published the Minutes of their latest meetings. Policymakers from around the globe had made it clear that they are ready to pump in extra stimulus, to keep the economies afloat throughout the pandemic.

In its latest meeting, the US Federal Reserve has kept rates and the QE unchanged, although several FOMC members proposed clearer forward guidance and to make asset purchases a traditional program for easing financial conditions. Despite agreeing on using every tool available, policymakers have left negative rates out of the picture, at least for now.  The European Central Bank also stands ready to do more, according to the Monetary Policy Meeting Accounts. One other thing global central banks agree on is the high level of uncertainty amid the ongoing coronavirus pandemic.

Growth-related data released these last few days showed that manufacturing and services activity bounced from record lows in May, but also indicated that the coronavirus-related downturn will likely steepen in the second quarter of the year. Inflation did no better, as April’s annual CPI in the Union was at 0.3%, while the core reading at 0.7%.

In general, data has backed what sentiment dictates: nothing is certain until the coronavirus crisis is over, and there’s no way to predict when that will happen.

The upcoming week, Germany will release the final version of Q1 GDP, expected to be confirmed at -2.3%. The most relevant event coming from the EU will be May Consumer Confidence.  The US   will publish next Thursday when the country will release April Durable Goods Orders, expected to have fallen by 18.1%, and the first revision of Q1 GDP, foreseen at -5.0%. The week will end with German Retail Sales, EU’s May CPI, and US core PCE inflation, all to be released next Friday.

As said, the EUR/USD pair is ending the week with gains, although there are no technical signs that it may continue advancing. The pair retreated after briefly surpassing a still bearish 20 SMA in the weekly chart, while still developing well below the larger ones. Technical indicators turned marginally higher, but remain within neutral levels and the momentum is limited.

In the daily chart, the pair is neutral-to-bearish, given that it retreated from its 200 SMA, and is now approaching the 20 SMA, which lacks directional strength. The Momentum heads nowhere around its 100 level, while the RSI gains downward strength, now at around 50. 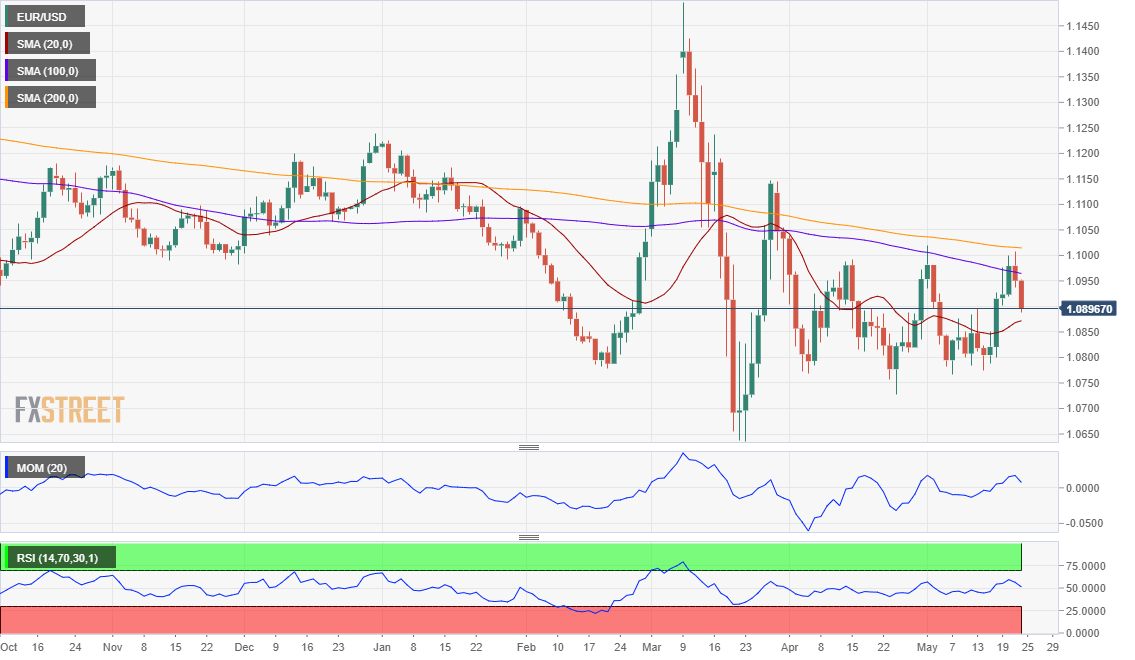 The FXStreet Forecast Poll shows that disappointed bulls are willing to give up, as most polled experts expect the pair to fall in the upcoming weeks. Bears represent 64% in the weekly perspective and decrease to 50% in the monthly one. However, bulls in this last time frame represent just 22%. On Average, the pair is seen holding between familiar levels, unable to run past the 1.1000 critical figure but holding above the mentioned yearly low.

In the Overview chart, moving averages have turned marginally higher but lack strength enough to confirm an upcoming bullish movement. In the weekly chart, most possible targets accumulate around or below the current level.

AUD/USD Forecast: Relations with China reversed the rally, can an improvement revive it?

GBP/USD Forecast: Boris's Brexit and lockdown decisions stand out after the vaccine-driven rally