The EUR/USD pair trades barely changed daily basis around 1.1830, but no doubts the common currency is the weakest currency through the FX board today, as despite greenback's soft tone, the pair is under selling pressure. Undermining the common currency, were headlines indicating that ECB's officials are considering reducing QE to €30billion from current €60 billion per month, starting next January. Also, Estonian ECB's  Governing Council member Ardo Hansson, said that monetary policy has to remain accommodative. 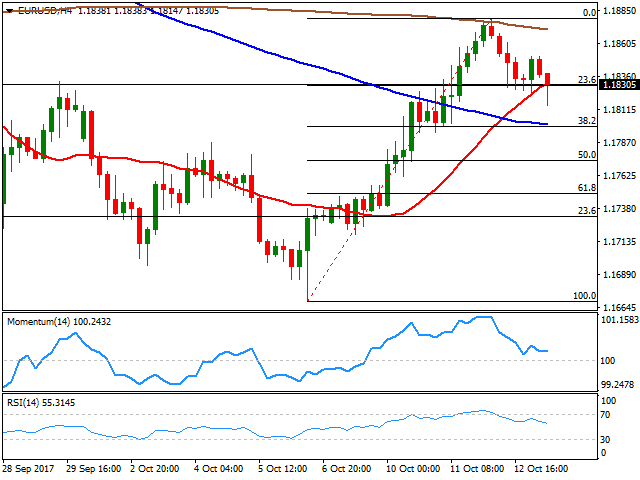 In the data front, Germany released the final version of September inflation, which came in as previously estimated, up by 0.1% on the month and by 1.8% when compared to a year earlier, hardly affecting the EUR. More relevant news will come from the US, which is due to release September inflation and retail sales figures. CPI is expected to have advanced modestly, while retail sales are also expected to have improved. If that's the case, and with the EUR weaker, the pair may end the week off its highs.

The pair fell down to 1.1814, still correcting from the fresh 2-week high set at 1.1879, and while it temporarily pierced the key 1.1820/30 support, it hasn't yet confirmed a bearish breakout of the region. Technically, the 4 hours chart shows that the price is struggling with a bullish 20 SMA, and the 23.6% retracement of this month's rally, while technical indicators continue retreating within positive territory, all of which indicates that a new leg lower will require additional technical confirmations.

The market will likely wait for US macroeconomic figures to make a decision, with better-than-expected numbers probably pushing the pair through the daily low, and therefore opening doors for a downward extension, towards the 38.2% retracement of the mentioned rally at 1.1795, while below this last, 1.1750/60 is the next probable bearish target.

Worse-than-expected US data could help the pair recover, but it would take an upward acceleration through 1.1850, to see the price retesting the weekly highs.  Selling interest is aligned around 1.1900, so given the current scenario, seems unlikely the pair could break beyond it, unless US data disappoint big.