The EUR/USD pair traded lower in range throughout the first half of the day, as higher government bond yields maintained the greenback strong.  However, the American currency eased ahead of a prepared speech from Federal Reserve’s head, Jerome Powell. As he repeated several times, he noted that they are “a low way” from their goals. Regarding rates, he said that the outlook is becoming more positive but remarked that “sustained” progress towards Fed’s goals is needed for policymakers to change the current monetary policy, indicating that they won’t hike rates until inflation runs above 2% for some time. His words boosted yields, which in turn sent the dollar up across the board and EUR/USD sub-1.2000.

The EU published January Retail Sales which were down by 5.9% monthly basis, much worse than anticipated, while the annual reading printed at -6.4% also missing the market’s forecast, adding pressure on the shared currency.  As for the US, the country has just published Initial Jobless Claims for February 26, which came in better than anticipated at 745K. February Challenger Job Cuts decreased sharply to 34.531K. In the last quarter of 2020, Unit Labor Cost stood at 6%, below the previous 6.8%, while Nonfarm Productivity came in at -4.2%, better than the -4.7% expected.

On Friday, Germany will publish January Factory Orders, foreseen up 0.%. The US will release the January Trade Balance and the February Nonfarm Payroll report. The country is expected to have added 182K new jobs in the month, while the unemployment rate is expected to have held steady at 6.3%. The US has still some 10 million positions to recover to pre-pandemic levels, which makes the expected headline an irrelevant number. 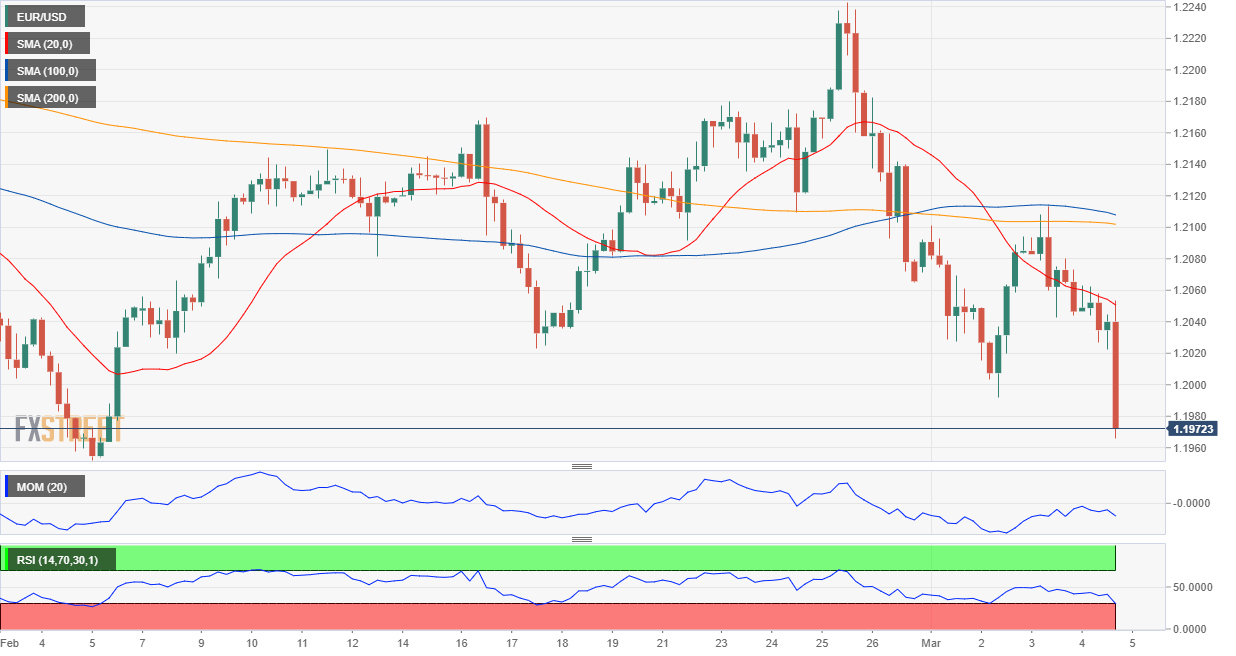 The EUR/USD pair trades at daily lows in the 1.1970 price zone, hovering around a Fibonacci level in the 1.1970 area and near the February’s low at 1.1951. The near-term picture indicates that the pair may extend its decline heading into the Nonfarm Payroll release. The 4-hour chart shows that the pair accelerated south after meeting sellers around a bearish 20 SMA, which heads firmly lower below the larger ones. Technical indicators have turned south within negative levels, with the RSI near oversold readings, in line with another leg south.