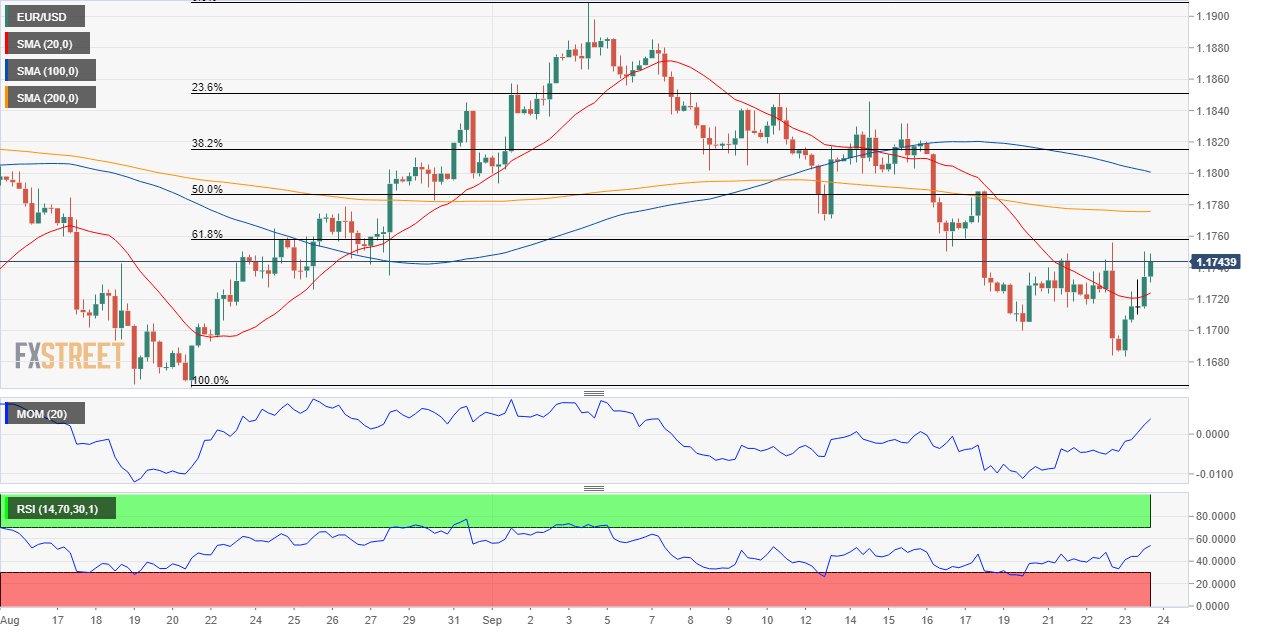 The EUR/USD pair advanced on Thursday on the back of a better market mood but held below its weekly high of 1.1755. Global markets welcomed relief news related to the Chinese Evergrande property company, as the risk of a default receded due to a possible split and support from the local government. The greenback was pressured throughout the day, edging lower against all of its major rivals.

EUR gains were limited by tepid local data, as  Markit published the preliminary estimates of its September PMIs. German and EU readings held into expansion territory but contracted from their August readings, also missing the market’s expectations. At the same time, news hit the wires about ECB policymakers seeing the risk of inflation exceeding projections, which underpins the case of tapering in the EU, despite the cautious stance from Lagarde & Co.

Across the pond, macroeconomic data was also poor. The US released Initial Jobless Claims for the week ended September 16, which printed at 351K, worse than anticipated. Additionally, the preliminary estimate of the Markit Manufacturing PMI for September resulted at 60.5, missing expectations, while the Markit Services PMI came in at 54.4 vs the 55 expected.

Germany will publish the September IFO survey on Friday, and the Business Climate is foreseen improving from 99.4 to 100.4, while the US will release August New Home Sales.

The daily chart for the EUR/UD pair shows that further gains are still in doubt. Technical indicators bounced from near oversold readings but remain well into negative territory. The 20 SMA stands pat at around 1.1800, while the longer ones maintain modest bearish slopes above the latter.

The pair is neutral in the 4-hour chart, as it managed to advance above a now mildly bullish 20 SMA while still below the longer ones. However, technical indicators lack directional strength within neutral levels. Bulls will have better chances if the pair advances beyond 1.1755, the 61.8% retracement of its latest daily advance and the weekly high.