The EUR/USD pair caught some fresh bids on Thursday and prolonged this week's positive momentum further beyond the very important 200-day SMA. The US dollar added to its weekly losses amid a stubbornly dovish Fed, which, in turn, was seen as a key factor driving the pair higher. The latest FOMC meeting minutes released on Wednesday revealed that policymakers remained cautious about the continuing risks stemming from the pandemic. The Fed reiterated its commitment to extending monetary policy support until the recovery was more secure.

Adding to this, Fed Chair Jerome Powell said on Thursday that the stance would only shift after a few consecutive months of positive data. This forced investors to reassess their expectations for Fed a Fed rate hike by the end of 2022. The repositioning was reinforced by a further pullback in the US Treasury bond yields. This, along with Thursday's data, showing that US Weekly Jobless Claims rose to 744K from the previous week's upwardly revised reading of 728K, further undermined the greenback and pushed the pair to over two-week tops.

On the other hand, the shared currency got an additional boost after Austria central bank Governor, Robert Holzmann said that the European Central Bank might be able to start reducing its bond purchases during the summer. This added to the optimism led by reports earlier this week that Germany, France, Italy, and Spain will have sufficient supplies to vaccinate at least 57% of their total populations by the end of June. The pair jumped to the highest level since March 23, around the 1.1925-30 region, though a cautious mood around the equity markets capped gains.

The pair edged lower during the Asian session on Friday and was last seen hovering around the 1.1900 round-figure mark. Market participants now look forward to the release of German Industrial Production and Trade Balance data for some impetus. The US economic docket features the only release of Produce Price Index, leaving the USD at the mercy of the US bond yields and the broader market risk sentiment. Nevertheless, the pair remains on track to post its largest weekly percentage gains in five months.

From a technical perspective, the pair on Thursday attracted some dip-buying near the 23.6% Fibonacci level of the 1.2350-1.1704 downfall. A subsequent strength and acceptance above the 200-day SMA support prospects for additional gains. Hence, some follow-through strength towards the 38.2% Fibo. level, around mid-1.1900s, looks a distinct possibility. This is followed by a strong barrier near the 1.1980-85 supply zone, which if cleared decisively should push the pair further beyond the key 1.2000 psychological mark and set the stage for additional gains. The next relevant resistance is pegged near the 1.2035 region, coinciding with the 50% Fibo. level.

On the flip side. the 23.6% Fibo. level, around the 1.1860-55 region might continue to protect the immediate downside. That said, sustained weakness below might prompt some technical selling and accelerate the slide further towards the 1.1800 horizontal level. Some follow-through selling will suggest that the recent positive move has run out of steam and set the stage for the resumption of the pair's recent pullback from three-year tops touched in January. 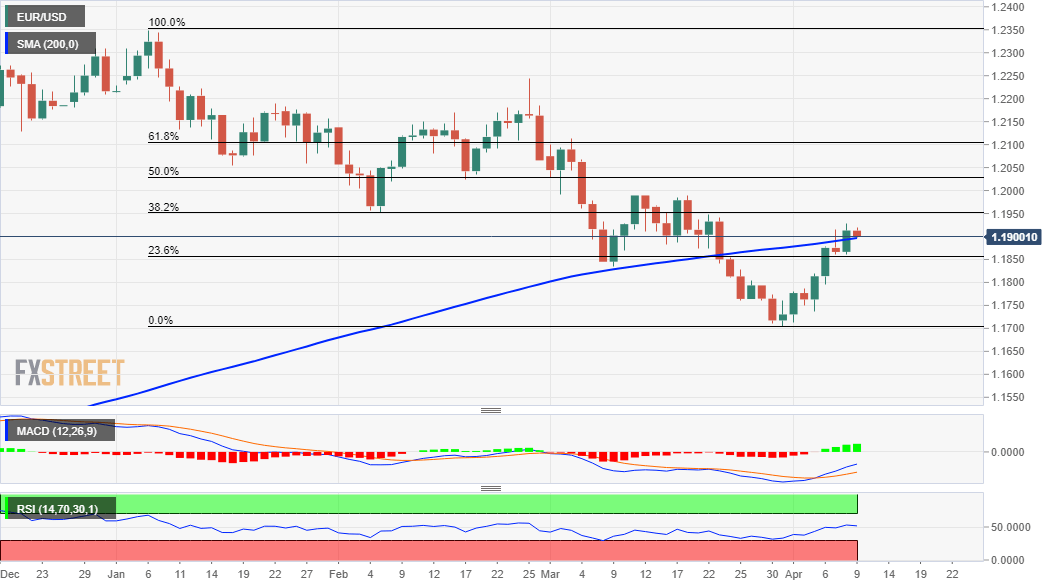