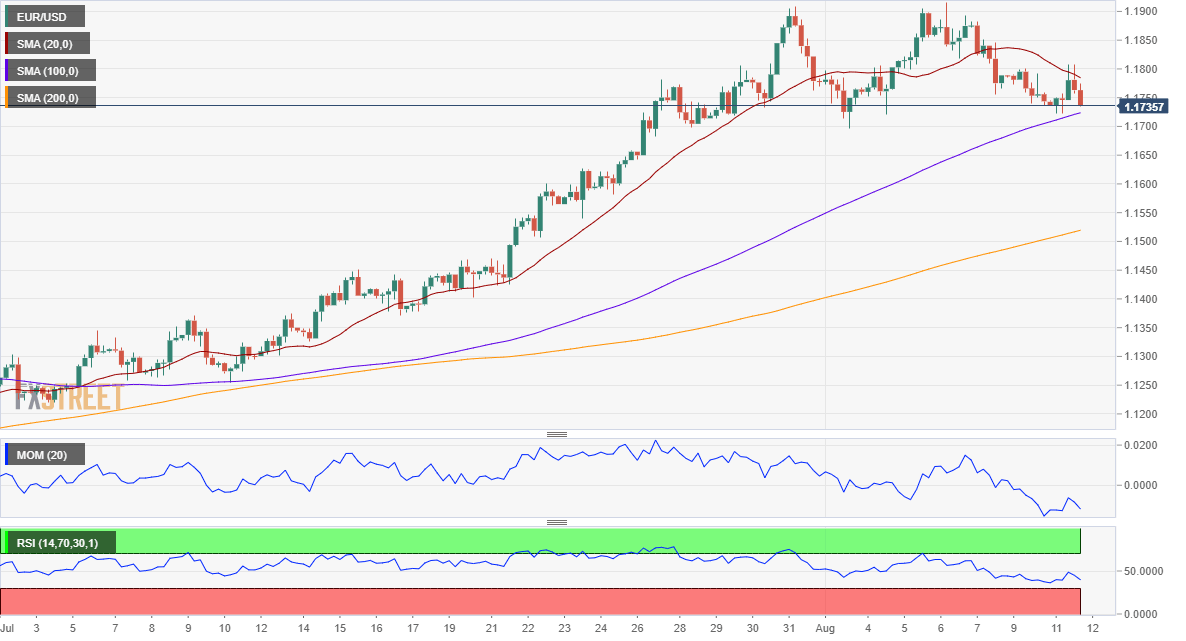 The EUR/USD pair peaked this Tuesday at 1.1807, as the dollar weakened for most of the day, recovering some ground ahead Wall Street’s close. Market players were on an upbeat mood, with global equities posting gains after US President Trump hinted a tax cut on capital gains, late on Monday. Traders bet back on the greenback during the American afternoon, resulting in EUR/USD ending the day in the red in the 1.1740 price zone.

Data was mixed both shores of the Atlantic, as the German ZEW Survey showed that Economic Sentiment in the country improved in August from 59.3 to 71.5, although the assessment of the current situation deteriorated to -81.3 from -80.9. The EU Economic Sentiment in the same month improved to 64 from 59.6, beating expectations. The US, on the other hand, published the July NFIB Business Optimism Index, which declined to 98.8 in July, missing expectations. The Producer Price Index for the same month improved to 0.5% YoY in the same month, beating the market’s forecast. Wednesday will bring the EU Industrial Production data for June, and US CPI figures for July.

The EUR/USD pair has briefly fallen below the 23.6% retracement of its July/August rally at 1.1740,t settling a few pips below it. From a technical point of view and in the short-term, the bullish potential seems limited, given that in the 4-hour chart, the pair was unable to advance beyond a bearish 20 SMA. The 100 SMA, however, continues heading north at around 1.1720, providing dynamic support. Technical indicators, in the meantime, corrected oversold conditions but resumed their declines within negative levels.

EUR/USD has gained traction and climbed above 1.0900 in the European session after the upbeat sentiment data from the Eurozone area helped the Euro gather strength. Meanwhile, the US Dollar stays on the back foot despite the cautious market mood.

GBP/USD has gathered recovery momentum and advanced beyond 1.2400 on Monday. The modest selling pressure surrounding the US Dollar ahead of key central bank policy announcements later this week seems to be helping the pair push higher.

Gold price has recovered toward $1,930 and erased its daily losses. With the benchmark 10-year US Treasury bond yield gaining more than 1% on the day above 3.5%, however, XAU/USD is struggling to gather further bullish momentum.