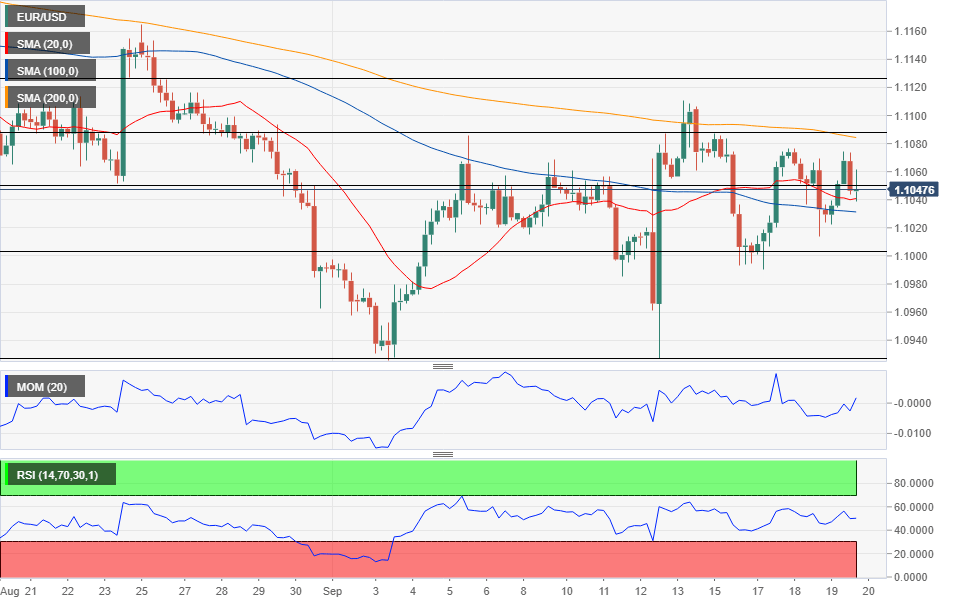 The FX market saw some action during the Asian session, echoes of the Fed’s monetary policy decision, later seeing little action throughout Thursday. The EUR/USD pair advanced up to 1.1073, as despite the dollar got supported by the US Central Bank, the shared currency got underpinned by news France and Germany are working on a strategy to respond to a global economic slowdown, with France putting fiscal stimulus on the table. Nevertheless, the news fell short of pushing the pair into bullish ground.

The macroeconomic calendar lacked relevant data, as the EU only released July Current Account, which was up to €20.55B seasonally adjusted, slightly better than anticipated. The US has just unveiled Initial Jobless Claims for the week ended September 13, which came in at 208K better than the 213K expected, although the previous week was upwardly revised by 2,000 to 206K. The Current Account posted a larger-than-anticipated deficit of $128.2B in Q2, while the Philadelphia Fed Manufacturing Survey beat the market’s expectation by printing 12, although below the previous 16.8. Finally, Existing Home Sales in the US rose by 1.3% in August. The data, while not first-tier, indicates that the US economy is far from a recession and justifies the hawkish stance from Fed Chief’s Powell.

This Friday, Germany will release August producer prices, while the EU will publish the preliminary estimate of September Consumer Confidence, seen improving modestly to -7.0. In the US, only a speech from Fed’s Rosengren is scheduled.

The EUR/USD pair has spent the day within Wednesday’s range, holding on to modest daily gains by the end of the day and trading at around 1.1040. Confined to familiar levels, the short-term picture is neutral-to-bullish, as, in the 4 hours chart, it keeps hovering around mild-bearish 20 and 100 SMA, and below the 200 SMA this last at around 1.1085. In the mentioned chart, technical indicators are stable within positive levels, lacking clear directional strength and without confirming an upcoming slide. The upside remains limited by selling interest aligned in the 1.1070/80 price zone.