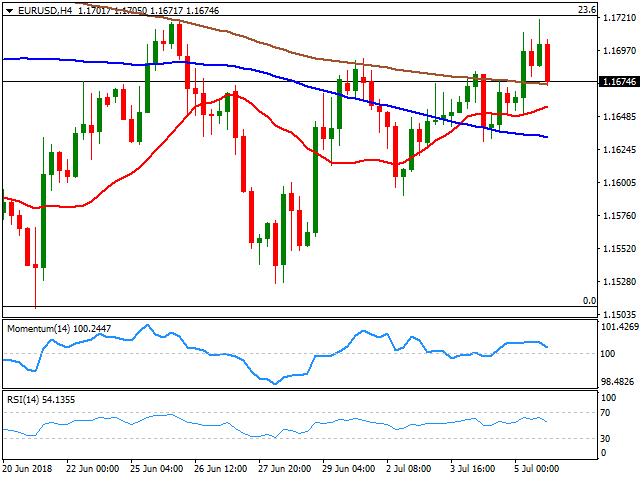 The EUR/USD pair edged higher in a day where anxiety was overly clear. The pair surged to 1.1719, getting an early impulse for Wednesday's news that some ECB policymakers believe that raising rates by the end of 2019 would be "too late," helped by the imbalance between macroeconomic data between both economies. Germany Factory Orders jumped in May 2.6% when compared to April when they fall 2.5%. The YoY reading resulted at 4.4% from the previous -0.1% and the expected 1.7% advance. In the US, employment-related figures published at the beginning of the session were discouraging, as Challenger Job Cuts rose 18%, from 31,517 in May to 37,202 in June,  while the private sector added 177K new jobs in June, missing expectations of 190K, according to the monthly ADP survey. Finally, jobless claims rose to 231K for the week ended June 30, well above the 225K expected, also above an upwardly revised 228K in the previous week. Upward revisions to activity in the services sector were just enough to halt dollar's decline ahead of the release of FOMC Minutes, with the Markit index revised to 56.2 from 56.0 and the official ISM one up to 59.1 from 58.6 in May.

The FOMC Minutes reaffirmed policymakers commitment to raise rates gradually, as " the economy already very strong and inflation expected to run at 2 percent on a sustained basis." Policymakers also acknowledged that the negative risks to the economy from US trade policy have intensified, but despite less hawkish than anticipated, the dollar found some love after the release.

Investors are in wait-and-see mode ahead of Friday's Nonfarm Payroll report and fresh clues on US tariffs on Chinese goods, and the retaliation measures this last can take. The US economy is expected to have added 195K new jobs in June, the unemployment rate is seen at record lows of 3.8%, while wages are expected to remain subdued, up monthly basis 0.3% and by 2.8% YoY.

Technically, the pair is retreating from the upper end of the last 3-week's range, finding sellers around the 23.6% retracement of the April/May weekly decline, and in the shorter term, the pair presents a neutral stance, as it recovered above all of its moving averages, while technical indicators hold within positive territory, now turning south. The market will likely wait for the US employment report and the developments around tariffs to decide where to go next, with high chances of the second overshadowing the first.