The shared currency weakened across the board on Wednesday after the ECB President Mario Draghi acknowledged that downside risks are materializing. In the post-meeting press conference, Draghi sounded downbeat on the economic outlook turned out to be one of the key factors exerting some heavy downward pressure on the major. Draghi said that the incoming data confirms slower growth momentum extending into the current year and global headwinds continue to weigh on the euro area growth developments. Meanwhile, the European Central Bank, as was widely expected left benchmark interest rates unchanged and reiterated its plan to hold them at current levels at least through the end of the year.

The EUR/USD pair tumbled to an intraday low level of 1.1230 and was further pressurized by a goodish US Dollar rebound following the release of the latest US consumer inflation figures, showing that the headline CPI accelerated to 1.9% y/y rate from 1.5% recorded in the previous month. However, core CPI slowed to 2.0% y/y rate, as against 2.1% previous and expected, and eventually kept a lid on any runaway USD rally. Meanwhile, minutes of March 19-20 FOMC meeting indicated that a majority of policymakers saw interest rate unchanged for the rest of this year while some members are open to a rate cut if incoming data warrant so. The Fed’s patience stance prompted some fresh USD weakness and helped the pair to recover early lost ground.

The pair built on the overnight rebound and traded with a mild positive bias for the fourth straight day during the Asian session on Thursday. Thursday's economic docket features the release of final German CPI print for March, which followed by March PPI figures and initial weekly jobless claims data from the US will now be looked upon for some fresh impetus. Adding to this, scheduled speeches by influential FOMC members might further contribute towards producing some meaningful trading opportunities later during the early North-American session.

From a technical perspective, nothing seems to have changed much for the pair except that the 1.1285 region - marking 38.2% Fibonacci retracement level of the 1.1448-1.1184 recent slide, now seems to have emerged as immediate strong resistance. Hence, it would be prudent to wait for a sustained move beyond the mentioned barrier before positioning for any further near-term appreciating move beyond the 1.1300 round figure mark, and 50% Fibonacci retracement level, towards the next hurdle near the 1.1325 supply zone.

On the flip side, the 1.1250-45 region (23.6% Fibo. level), also coinciding with the lower end of an ascending trend-channel formation on the 1-hourly chart, might continue to act as immediate support. A convincing break through the said support now seems to accelerate the slide towards the 1.1210-1.1200 area, en-route the 1.1180-75 support - marking 61.8% Fibonacci retracement level of the 1.0341-1.2556 up-move, which if broken might turn the pair vulnerable to slide further towards testing sub-1.1100 level. 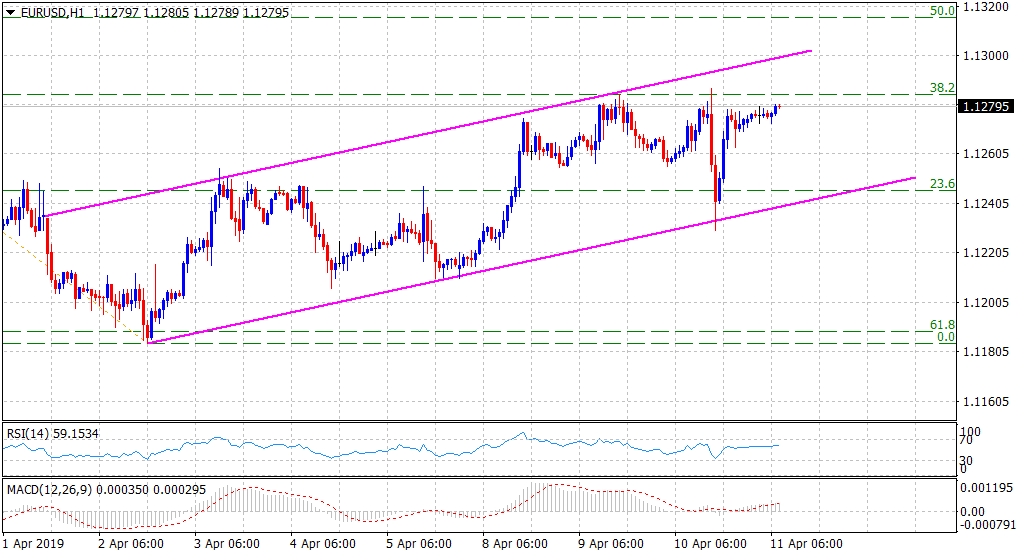