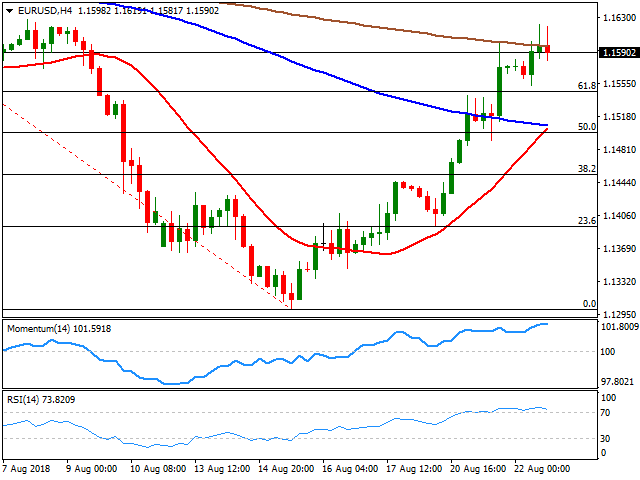 The FX board continued gyrating around the US President Trump, with the greenback depreciating sharply mid-European session, on headers indicating that his former lawyer, Michael Cohen has details of a Russian conspiracy to manipulate elections. While hardly likely to occur, the word "impeachment" began sounding out loud again. The news pushed the EUR/USD up to 1.1622, a major static resistance level that the pair was unable to surpass. The macroeconomic calendar didn't offer much, as there were no releases in the EU, while the US released July Existing Home Sales figures, which by the way, disappointed by falling 0.7% vs. an expected advance of 0.6%. FOMC Meeting's Minutes hinted a September rate hike, but added a dovish note, as concerns over how trade disputes could disrupt growth have increased. Fears that escalating tensions could prevent the Fed from hiking again after September, sent the USD marginally lower against all of its rivals.

In the meantime, US and Chinese officials began talks in Washington. This Thursday, the latest $16 billion worth of tariffs on Chinese imports will go into effect and could trigger a quick response from the Asian country, resulting in a run to safety. Also Thursday, the macroeconomic calendar will finally have something to offer, with preliminary August Markit PMI for both economies, ECB's Minutes, and EU preliminary Consumer Confidence, among others.

The prevalent dollar's weakness left the EUR/USD pair above the 61.8% retracement of its August monthly slide, at 1.1545,  the immediate support. Technical readings in the 4 hours chart suggest that the pair could continue advancing, as technical indicators barely lost directional strength in extreme overbought territory, while the pair keeps developing well above its 20 and 100 SMA, with the shortest about to cross the larger one and both around 1.1500/10. Despite attempting to break above it, the pair was unable to surpass a bearish 200 SMA. The 1.1620 area is a key static resistance, and a break above it should lead to a test of the monthly high at 1.1699.