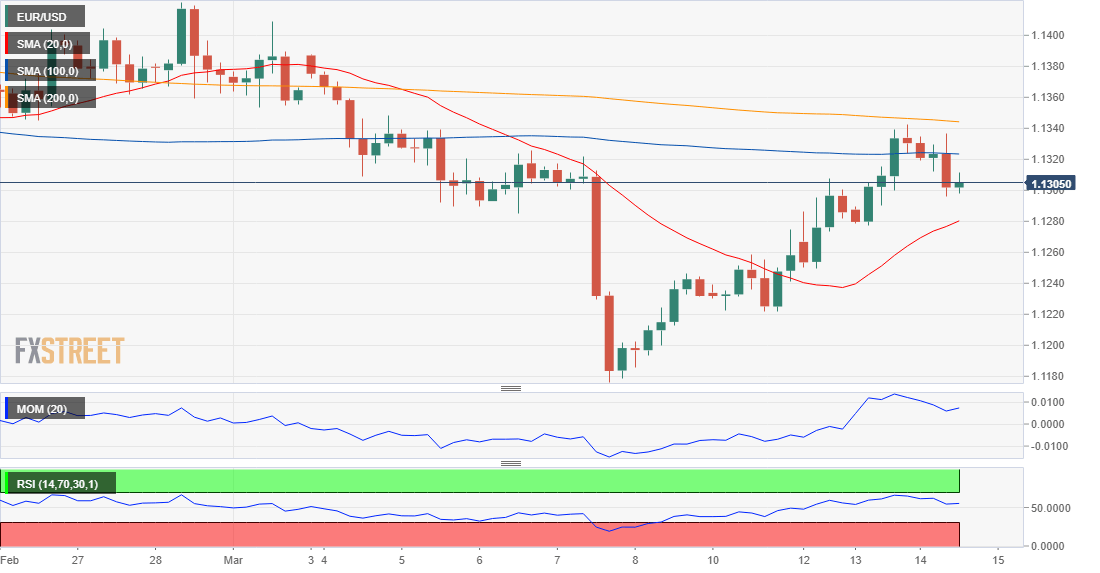 The EUR/USD pair topped at 1.1338 by the end of the American session Wednesday, falling to 1.1295 today, as risk aversion took over the London session, following news that China is considering delaying the Trump-Xi meeting to at least April. Additional pressure for the common currency came from German inflation, which rose by less-than-expected in February, up by 0.4% MoM and by 1.5% YoY. Ahead of Wall Street's opening, the US unveiled weekly unemployment claims, up to 229K for the week ended March 8, sending the greenback lower across the board, particularly considering equities are bouncing after the initial shock post-trad- war headlines. Still pending of release in the US, are January New Home Sales, seen down by 0.9%.

Still, the bounce was quite shallow, and the pair remains at the lower end of its daily range, barely holding above the 50% retracement of its latest daily slump. Quite relevant, as the pair faltered Tuesday around the 61.8% retracement of the same decline.  The 4 hours chart shows that technical indicators are easing from overbought levels, while the 20 SMA maintains its bullish slope around 1.1280. It also shows that, after battling around the 100 SMA, the pair is now extending below the indicator, another sign that the next move could be lower. Chances of a bearish extension will be larger on a break below 1.1295, the daily low. Te mentioned 61.8% retracement offers an immediate static resistance at 1.1330.

EUR/USD's daily chart shows a sideways channel pattern. A key oscillator indicates the pair could revisit the channel support. A range breakdown could cause more sellers to join the market and shift risk in favor of a re-test and possibly a break below the 2020 low of 1.0636 reached on March 23.