Yesterday the ZB made a major move at around 8 AM EST.  The ZB hit a High at around that time and the S&P hit a Low.  If you look at the charts below ZB gave a signal at around 8 AM EST and the S&P moved Higher at the same time.  Look at the charts below and you'll see a pattern for both assets. ZB hit a High at around 8 AM and the S&P was moving Higher shortly thereafter.  These charts represent the newest version of MultiCharts and I've changed the timeframe to a 15 minute chart to display better.  This represented a long opportunity on the 30 year bond, as a trader you could have netted about 20 plus ticks per contract on this trade.  Each tick is worth $31.25.  Please note: the front month for the ZB is now December.  The S&P contract is now at December as well and I've changed the format to Renko bars such that it may be more apparent and visible. 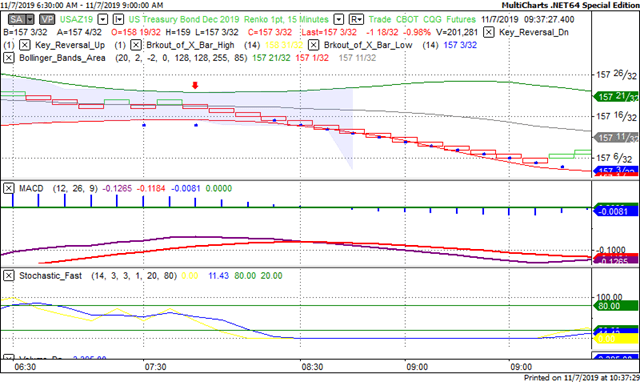 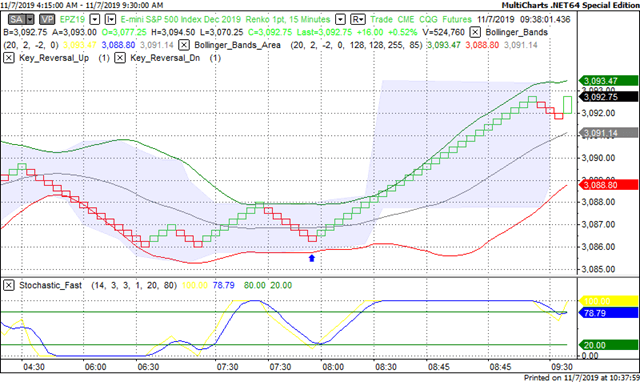 Yesterday we gave the markets an Upside bias  as the USD, Bonds and Gold were all trading Lower and this reflects an Upside day.  The markets didn't disappoint as the Dow gained 182 and the other indices gained ground as well.  In fact the Dow and S&P hit record highs.  Today we aren't dealing with a correlated market and our bias is to the Downside.

Yesterday we had good economic news in the form of Unemployment Claims that went lower than expected (and that is good news) as well as Consumer Credit numbers that came in far less than expected and that is also good news.  Another factor that had an effect on the markets was the news that both the US and China have agreed to cancel each other's countries tariffs in stages starting sometime in December.  This was heralded as good news as well.  Today we have preliminary numbers on both Consumer Sentiment and Inflation expectations, these are considered Major.

On Thursday, April 5th (of last year) we had the honor and privilege to be interviewed by David Lincoln on his You Tube channel.  David is a floor trader for the options markets.  If you listen to this interview, you will enjoy it.

EUR/USD is on track to post the first monthly gain of 2020. Technical breakout and EU fiscal hopes could push EUR/USD above 1.11 on Friday. On the data front, the focus will be on Eurozone CPI.