This is not a correlated market. The dollar is Down- and Crude is Up+ which is normal but the 30 year Bond is trading Higher. The Financials should always correlate with the US dollar such that if the dollar is lower then bonds should follow and vice-versa. The S&P is Higher and Crude is trading Higher which is not correlated. Gold is trading Higher which is correlated with the US dollar trading Down.  I tend to believe that Gold has an inverse relationship with the US Dollar as when the US Dollar is down, Gold tends to rise in value and vice-versa. Think of it as a seesaw, when one is up the other should be down. I point this out to you to make you aware that when we don't have a correlated market, it means something is wrong. As traders you need to be aware of this and proceed with your eyes wide open.

Yesterday the ZB made it's move at around 7:15 AM EST. The ZB hit a Low at around that time and the S&P moved Lower. If you look at the charts below ZB gave a signal at around 7:15 AM EST and the S&P moved Lower at around the same time. Look at the charts below and you'll see a pattern for both assets. ZB hit a Low at around 7:15 AM EST and the S&P was moving Lower shortly thereafter. These charts represent the newest version of MultiCharts and I've changed the timeframe to a 15 minute chart to display better. This represented a Long opportunity on the 30 year bond, as a trader you could have netted about a dozen ticks per contract on this trade. Each tick is worth $31.25. Please note: the front month for the ZB is now Sept '20. The S&P contract has been changed to Sept '20. I've changed the format to Renko bars such that it may be more apparent and visible. 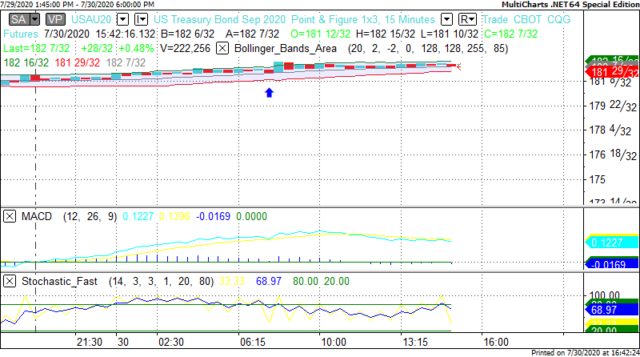 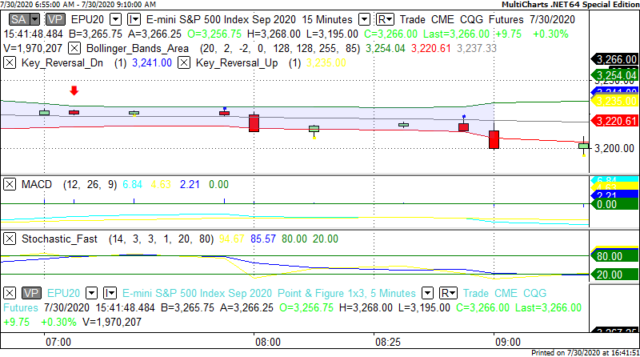 Yesterday we gave the markets a Downside bias as both the USD and the Bonds were trading Higher Thursday morning and this usually represents a Downside day for the indices. The markets didn't disappoint as the Dow dropped 226 points, the S&P fell by 12 but the Nasdaq did gain 45 points. Today we aren't dealing with a correlated market and our bias is Neutral.

The day after FOMC Day and the markets were mixed as both the Dow and S&P lost ground but the Nasdaq did show some gains. The economic news reported yesterday wasn't stellar and as such the markets did falter. Most notable was Advanced GDP showing a greater than expected decline and first time Unemployment Claims showing 1.4 million new claims. This isn't good by any standard. Of course the politicos in DC will blame each other as is their custom but the fact remains that people are hurting and this squabbling isn't helping the American people. This is is a time that requires bold action but all we get are arguments as to what the extended UI amounts should be. The idea of having a weekly benefit amount of 70% of that person's prior income would be a logistical nightmare unto itself. As someone who spent 30 years in the Technology Industry, we are looking at 50 disparate systems that would have to integrated in order for this to work and at the Federal level a new system would have to be built to accomplish this. By the time that's done we'll be talking about a new, new stimulus package.