Macroeconomic investors will be focused on Draghi’s decision on the CSPP which is the corporate sector purchase program where the ECB buys 60 billion euros per month in corporate bonds. The plan ends in December which means Draghi will need to decide whether to extend it; if he extends it, he needs to decide for how much and how long. There has been a growing consensus among those skeptical of central bank policies that the Fed’s $10 billion per month in tapering this year won’t matter if the JCB and the ECB keep going with their programs. One of the keys to watch when figuring out what the ECB will do is the inflation projections.

As you can see from the chart below, the 2018 and 2019 inflation expectations have been revised down twice this year. Looking at this chart, I see no correlation or causation between the CSPP and inflation, but higher inflation would cause the plan to be ended and lower inflation allows it to continue because policymakers believe the CSPP causes inflation. Europe has seen improved growth in 2017, so that’s the counterbalance for inflation which pushes policymakers towards ending the program. Some central bank skeptics are saying that the ECB will stop buying bonds because it will soon run out of them to buy. If running out was the only factor preventing buying, then I don’t think there would be a need to taper next year. The possibility of running out of bonds to buy will first be seen by the JCB as it has near the same size balance sheet as the ECB even though the Japanese economy is much smaller than the European economy. 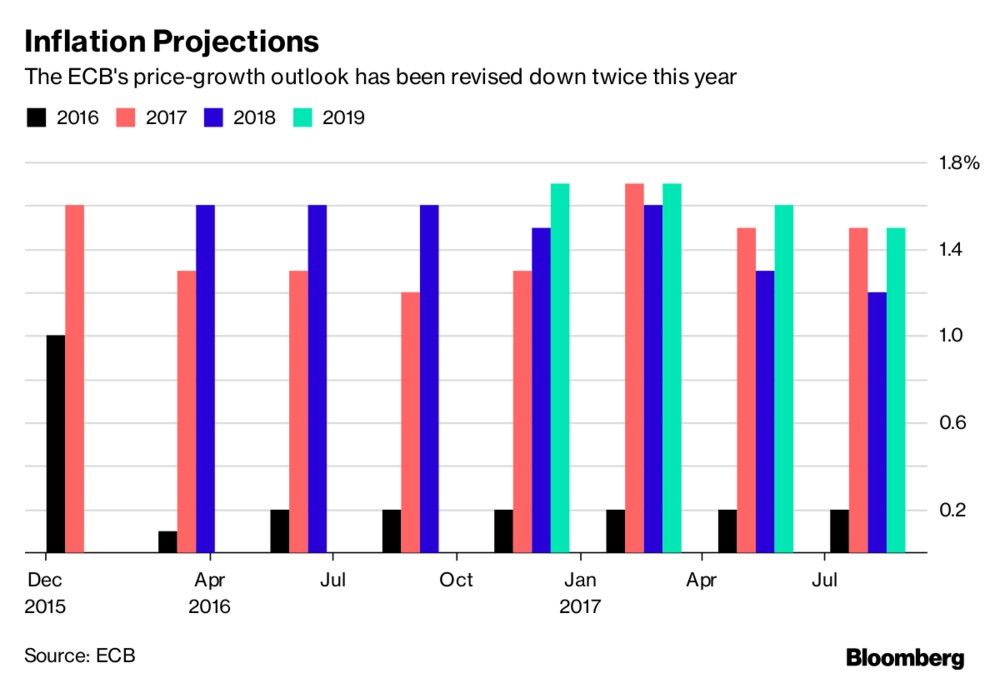 Bank of America Merrill Lynch made a good point about the aspects affecting the ECB’s decision making being different from that of the Fed. It’s obvious the dynamics are different because the policies have been different as the Fed’s QE 3 program ended in 2014 and the balance sheet is about to be unwound, while the ECB’s CSPP continues until at least December. BAML says that Fed is more concerned with asset bubbles since the S&P 500 is at a record high. It says the EU stocks aren’t at a historic high and the stock market isn’t as important to the economy. I would contend with that first point because the stock market doesn’t need to be at a record high to be a bubble. European equities have high multiples without them reaching record highs. However, the second point is rational because the Fed has ended QE and started the unwind even without high inflation. You can argue there’s a fear of inflation picking up and a fear of being stuck with a large balance sheet and low rates heading into a recession, but the main reason QE is being unwound is fears of financial bubbles. The main case Neel Kashkari has against rate hikes is he thinks the Fed shouldn’t prevent bubbles because they are too tough to see. He thinks some workers haven’t seen enough wage growth.

The second point BAML makes about the ECB’s monetary policy is that the ECB tightening could increase the borrowing costs for countries like Italy and Spain. Sustainability and the potential for a European breakup are in the heads of ECB policymakers. This would be considered a big problem in America because the Fed is supposed to not be political. The fact that the ECB does take politics into account makes the threshold for changing the CSPP more complicated to determine. One point where the political risk and the economic risk are coordinated is inflation because German economists at the Bundesbank are angry with the way the program has helped the periphery nations while potentially increasing inflation in Germany.

Another aspect that will gain attention in the next few months is that Mario Draghi’s term ends in 2019. Once Yellen is re-appointed or replaced, the decision will be the top story in the monetary policy sphere. It’s too early to tell who will get the position, but one of the names which has been floated is Jens Weidmann. He is the head of the German central bank. If he was in charge, the CSPP would likely be ended and interest rates would be raised. He would act more in the best interests of Germany which is why Italy and Spain are against him being picked. The problem for Germany is that if rates were raised, the economies of Italy and Greece would falter, meaning a bailout might be necessary. Either Germany helps the periphery nations monetarily or fiscally; if not, the EU breaks up, which hurts Germany because its exports are benefited by the cheap currency.

Obviously 2019 is in a long time. It’s possible the CSPP will be ended by then anyway. I’ve seen projections which have it ending at the end of 2018. The ECB will raise rates after it ends which means that will happen sometime in 2019 or 2020. The worst case scenario for stocks would be if Warsh is appointed by President Trump and Weidmann is appointed to be the ECB chair in 2019. That would be a reversal of doing whatever it takes to support the economy. The threat of Weidmann being picked could hamper Draghi because the more he pushes the CSPP, the more Germany will be outraged by it.

The chart below is why the ECB’s policy effects the U.S. markets. As you can see, even though the Fed is unwinding the balance sheet, the total G3 purchases will be a net positive because of the JCB and ECB. Even if this projection is accurate, I think investors should focus on the changes in the winter and spring of 2018. That might be when volatility picks up. It’s possible if no recession or big correction in stocks occurs, that the net purchases goes negative in 2019. Then we would have a relatively free market although the potential of a return to QE could cap losses. 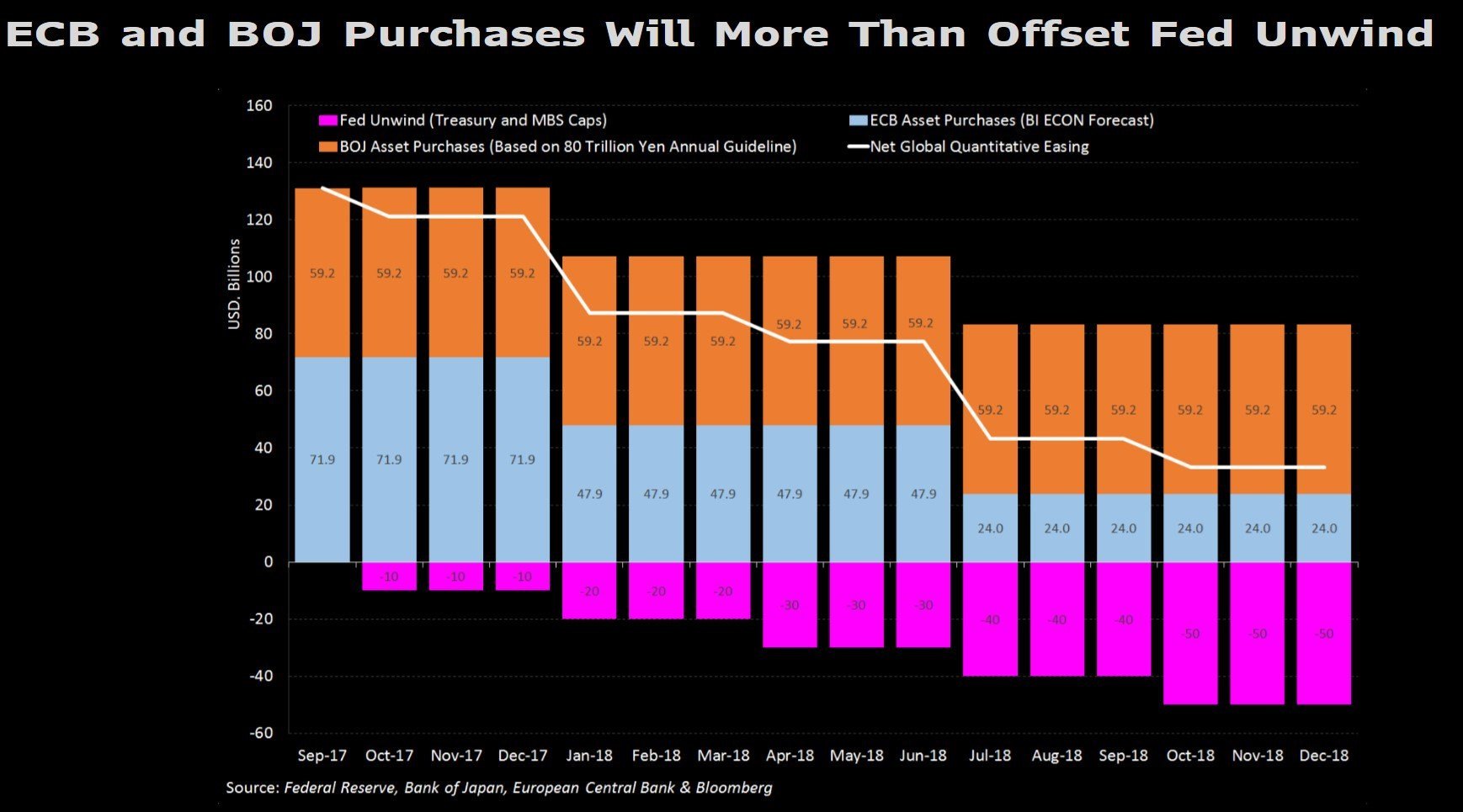