This is not a correlated market.  The dollar is Up+ and Crude is Down- which is normal but the 30 year Bond is trading Lower.  The Financials should always correlate with the US dollar such that if the dollar is lower then bonds should follow and vice-versa. The S&P is Higher and Crude is trading Lower which is correlated. Gold is trading Lower which is correlated with the US dollar trading Higher.   I tend to believe that Gold has an inverse relationship with the US Dollar as when the US Dollar is down, Gold tends to rise in value and vice-versa. Think of it as a seesaw, when one is up the other should be down. I point this out to you to make you aware that when we don't have a correlated market, it means something is wrong. As traders you need to be aware of this and proceed with your eyes wide open.

Charts Courtesy of MultiCharts built on an AMP platform Click on an image to enlarge it. 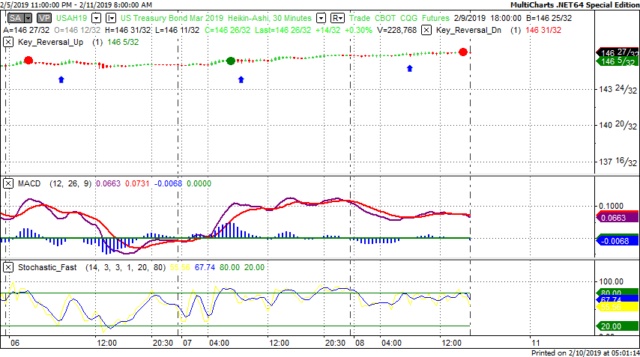 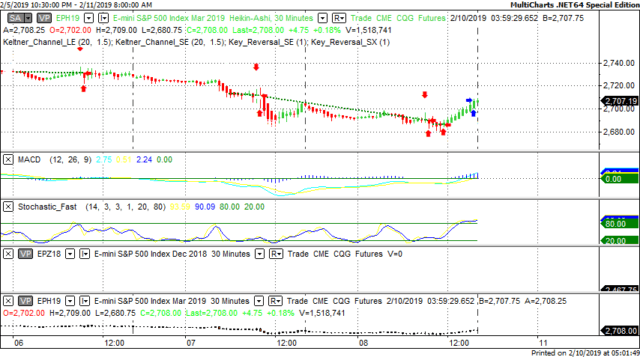 On Friday we gave the markets a Downside bias as both the USD and the Bonds were trading Higher Friday morning and that doesn't bode well for an Upside day hence the Downside bias.  The Dow dropped 63 points but the other indices managed to eke out a fractional gain.  Today we aren't dealing with a correlated market and our bias is Neutral.

Once again the Dow trended to the downside and fell on Friday with a loss of 63 points.  For whatever reason this all seems to stem from the State of the Union address last Tuesday.  Now the analysts and pundits are suggesting and foreseeing a worldwide global slowdown of economies.  But no one is stating as to why that is.  In the US everyone seems to think that the slowdown won't affect the United States.  The prevailing attitude seems to be "we have our tax cuts to keep us going and look at our great jobs numbers".  What everyone seems to forget is that the same situation occured in 2007 when the US had stellar gains in the job market but in December of that year the gains fell to 17,000 net new jobs created when the estimate was in the hundreds of thousands.  Bottom line, things can change and the US is not isolated from the rest of the world.  But as is all things only time will tell....