US equities continued falling as more companies continued publishing weak results. On Tuesday, the sell-off was triggered by the weak forward guidance by Snap. Today, the main company that is moving the market is Dick’s Sporting Goods. The firm’s stock price crashed by more than 17% after it published strong results and a weak forward guidance. It expects to earn between $9.15 and $11.70 per share, down from the previous $11.70 and $13.10. Stocks also declined ahead of key companies like Nvidia, Box, Workday, Splunk, and Williams-Sonoma. Futures tied to the Dow Jones rose by $136 while those tied to the Nasdaq fell by $75.

The New Zealand dollar rose and then pulled back after the RBNZ delivered its interest rate decision. The bank decided to hike interest rate by 0.50% as most analysts were expecting. It also signaled that it will continue hiking interest rates in a bid to lower inflation to between 2% and 3%. The decision came at a time when the country’s economy is doing well. Inflation has risen while household balance sheets have moved to the highest level in years. Analysts now expect that the RBNZ will deliver at least 3 more hikes this year.

The euro declined slightly after several economic data from Europe. In Germany, data by Destatis revealed that the economy expanded by 4.0% in Q1 from 1.8% in the previous quarter. On a month-on-month basis, the country’s economy expanded by 0.2%. Further data from Sweden showed that the producer price index (PPI) declined slightly to 23.8%. It also declined after Klaas Knot of the ECB said that a 0.50% rate hike will not be possible in July. The other key events to watch during the American session are crude oil inventories from the US and FOMC minutes.

The EURUSD pair declined to a low of 1.0660, which is lower than this week’s high of 1.0742. The pair retested the important support at 1.0646, which was the highest level on May 4. It has moved above the 25-day moving average while the Relative Strength Index (RSI) and the Stochastic Oscillator have been falling. Therefore, the pair will likely resume the bullish trend as bulls target the key resistance at 1.0740. 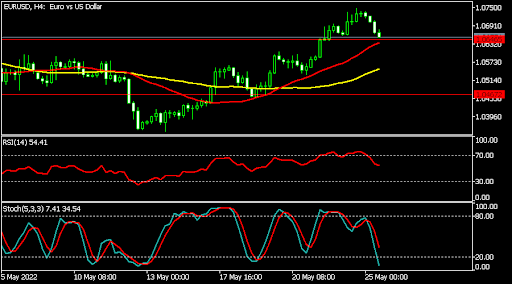 The GBPUSD pair declined to a low of 1.2492, which was the lowest level since Tuesday. The pair moved above the 25-day moving average. It is also slightly above the important support level at 1.2400. It has moved slightly below the 38.2% Fibonacci retracement level. The RSI has moved along the ascending trendline. Therefore, the pair will likely keep falling during the American session. 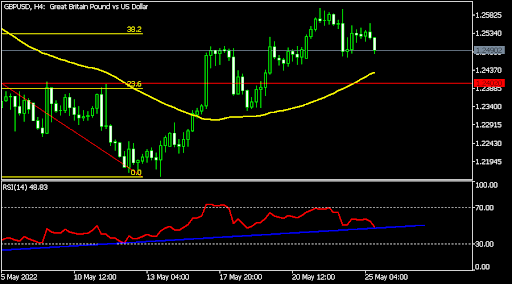 The ETHUSD pair moved sideways as the crypto consolidation continued. The pair is trading at 1,945. It has been in this range for a while. It has formed a triangle pattern that is shown in blue. The Relative Strength Index has moved below 50. The pair will likely remain in this range during the American session. 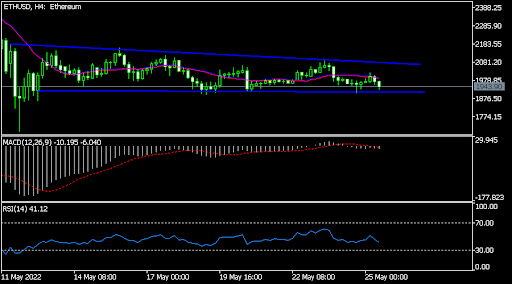