This is not a correlated market.  The dollar is Down- and Crude is Down- which is not normal but the 30 year Bond is trading Higher.  The Financials should always correlate with the US dollar such that if the dollar is lower then bonds should follow and vice-versa. The S&P is Lower and Crude is trading Lower which is not correlated. Gold is trading Higher which is correlated with the US dollar trading Down.   I tend to believe that Gold has an inverse relationship with the US Dollar as when the US Dollar is down, Gold tends to rise in value and vice-versa. Think of it as a seesaw, when one is up the other should be down. I point this out to you to make you aware that when we don't have a correlated market, it means something is wrong. As traders you need to be aware of this and proceed with your eyes wide open.

On Friday the ZB made a move at around 9:30 AM EST.  The ZB hit a Low at around that time and the S&P moved Lower.  If you look at the charts below ZB gave a signal at around 9:30 AM and the S&P moved Lower at around the same time.  Look at the charts below and you'll see a pattern for both assets. ZB hit a Low at around 9:30 AM EST and the S&P was moving Lower shortly thereafter.  These charts represent the newest version of MultiCharts and I've changed the timeframe to a 15 minute chart to display better.  This represented a Long opportunity on the 30 year bond, as a trader you could have netted 90 plus ticks per contract on this trade.  Each tick is worth $31.25.  Please note: the front month for the ZB is now June '20.  The S&P contract is now June '20 as well.  I've changed the format to Renko bars such that it may be more apparent and visible. 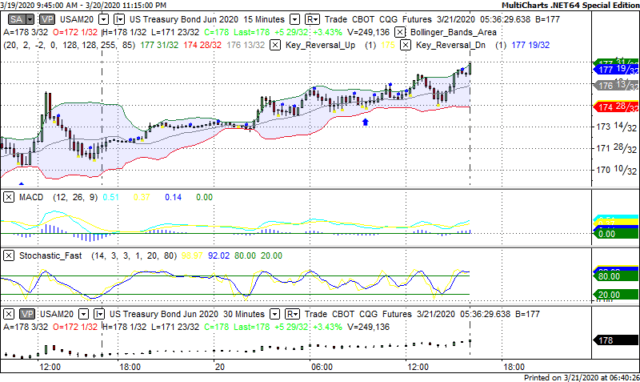 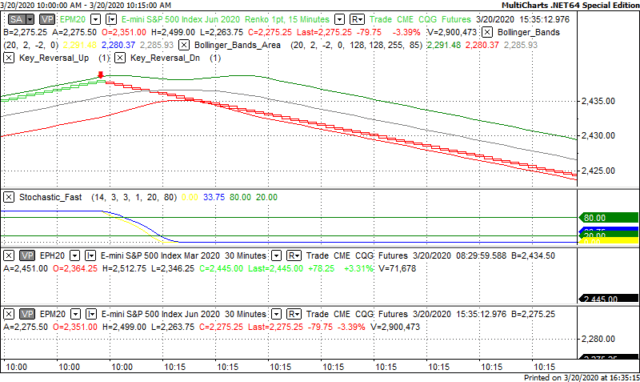 On Friday we gave the markets a Neutral bias as we saw no evidence of Market Correlation on Friday morning.  The Dow dropped 992 points and the other indices lost ground as well.  Today we aren't dealing with a correlated market and our bias is to the Downside.

It appears as though the markets are in free fall as the coronavirus is taking over the news.  The Dow dropped below 19,000 on Friday and hasn't been in that territory since 2017.  More and more states are jumping on the shutdown bandwagon and the Federal government will not announce a nationwide shutdown.  Economists are now suggesting Unemployment Claims at around 2.5 million which is about 10 times more than it is now.  We do think that at some point the short sellers will buy back their positions and in essence we will have a dead cat bounce, but as in all things time will tell how that all works out...

The Australian dollar soared against a weakened greenback, trading around 0.6800 a level that was last seen in January. RBA seen holding rates unchanged and maintaining its optimistic stance.

EUR/USD holds on to modest daily gains as speculative interest dumped the greenback on the back of dismal US data and civil unrest in the US.

The XAU/USD pair started the week with a bullish gap and rose above $1,740 during the Asian trading hours before losing its traction. After dropping toward $1,730, however, the pair capitalized on the broad-based USD weakness during the American trading hours and now looks to close in the positive territory.