The old saying goes: in the case of gold and the dollar, the latter’s uprising is the former’s downsizing. Will we see this materializing once again?

With the USD Index shrugging off the weak U.S. nonfarm payrolls print on Oct. 8 and demonstrating more and more resiliency as the months progress, the dollar basket has not only verified the breakout above the neckline of its inverse (bullish) head & shoulders pattern, but it’s also finding higher levels of support.

To explain, after bursting through its rising resistance line (which is now support), the recent consolidation is perfectly normal within a medium-term uptrend. Moreover, mirroring the behavior that we witnessed in June, the USD Index’s small correction after its RSI (Relative Strength Index) hit 70 was followed by another sharp move higher. As a result, the greenback’s technical foundation remains robust.

While a short-term consolidation could ensue following the USD Index’s ferocious rally, a similar development occurred in late June. After a short-term corrective downswing proceeded the USD Index’s sharp rally, the USD Index continued its medium-term ascent soon after. And while gold demonstrated the opposite price action in late June – recording a short- term rally and following that up with a medium-term drop to lower lows – the 2021 theme of ‘USD Index up, PMs down’ should continue to play out over the next few months.

To that point, with gold, silver and mining stocks often moving inversely to the U.S. dollar, the greenback’s likely uprising could sink the precious metals over the medium term. 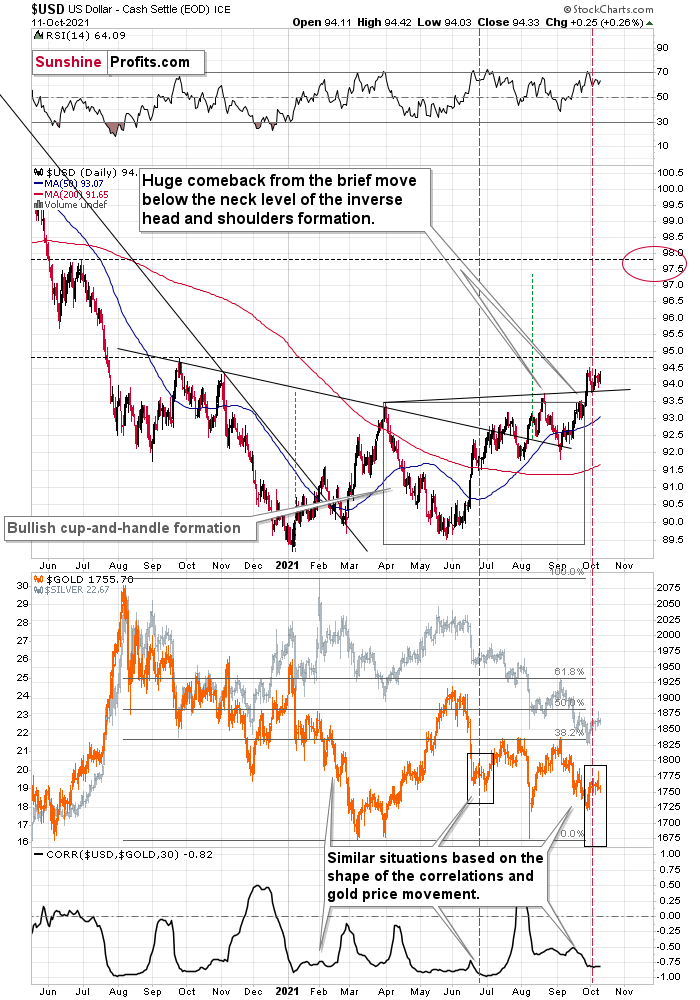 Equally bullish for the greenback, with the USD Index’s technical strength signaling an ominous ending for the Euro Index, the latter has struggled immensely in recent weeks.

And while the Euro Index bounced on Oct. 8 following the weak U.S. nonfarm payrolls print, the European currency closed at another 2021 low on Oct. 7 and has continued its freefall below the neckline of its bearish head & shoulders pattern. As a result, the next stop could be ~1.1500 (the March 2020 highs, then likely lower). For context, the EUR/USD accounts for nearly 58% of the movement of the USD Index, and that’s why the euro’s behavior is so important. 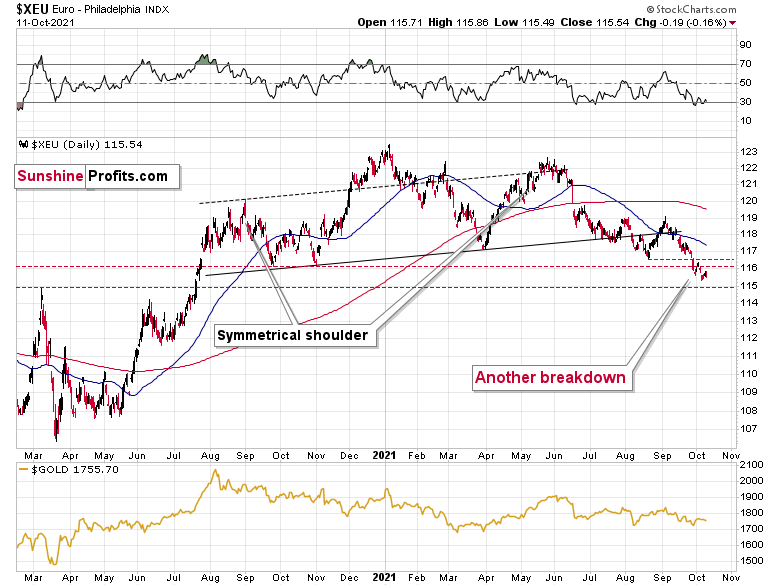 Adding to our confidence (don’t get me wrong, there are no certainties in any market; it’s just that the bullish narrative for the USDX is even more bullish in my view), the USD Index often sizzles in the summer sun and major USDX rallies often start during the middle of the year. Summertime spikes have been mainstays on the USD Index’s historical record and in 2004, 2005, 2008, 2011, 2014 and 2018 a retest of the lows (or close to them) occurred before the USD Index began its upward flights (which is exactly what’s happened this time around).

Furthermore, profound rallies (marked by the red vertical dashed lines below) followed in 2008, 2011 and 2014. With the current situation mirroring the latter, a small consolidation on the long-term chart is exactly what occurred before the USD Index surged in 2014. Likewise, the USD Index recently bottomed near its 50-week moving average; an identical development occurred in 2014. More importantly, though, with bottoms in the precious metals market often occurring when gold trades in unison with the USD Index (after ceasing to respond to the USD’s rallies with declines), we’re still far away from that milestone in terms of both price and duration.

Moreover, as the journey unfolds, the bullish signals from 2014 have resurfaced once again. For example, the USD Index’s RSI is hovering near a similar level (marked with red ellipses), and back then, a corrective downswing also occurred at the previous highs. More importantly, though, the short-term weakness was followed by a profound rally in 2014, and many technical and fundamental indicators signal that another reenactment could be forthcoming. 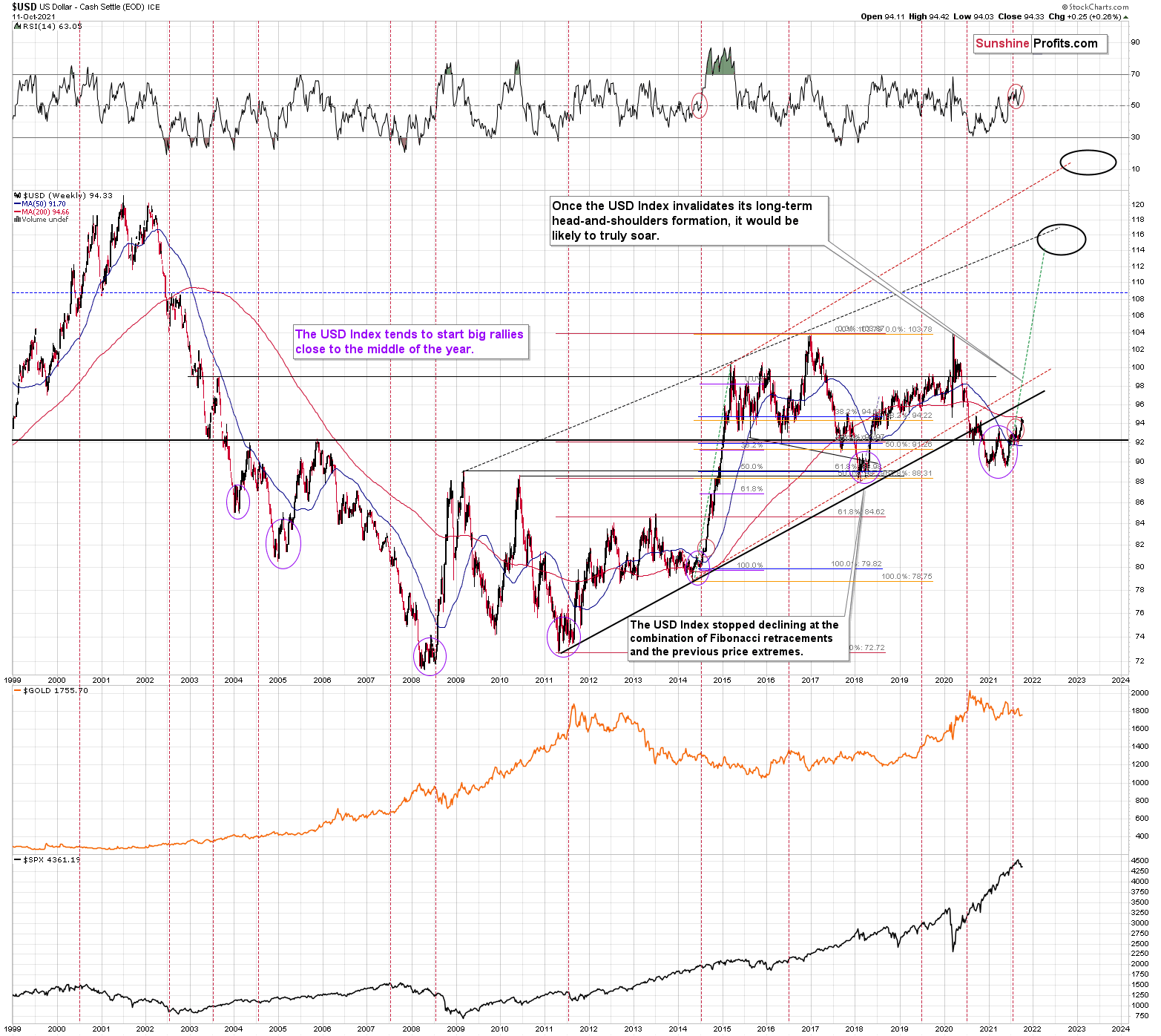 Just as the USD Index took a breather before its massive rally in 2014, it seems that we saw the same recently. This means that predicting higher gold prices (or the ones of silver) here is likely not a good idea.

Continuing the theme, the eye in the sky doesn’t lie. And with the USDX’s long-term breakout clearly visible, the wind still remains at the dollar’s back. 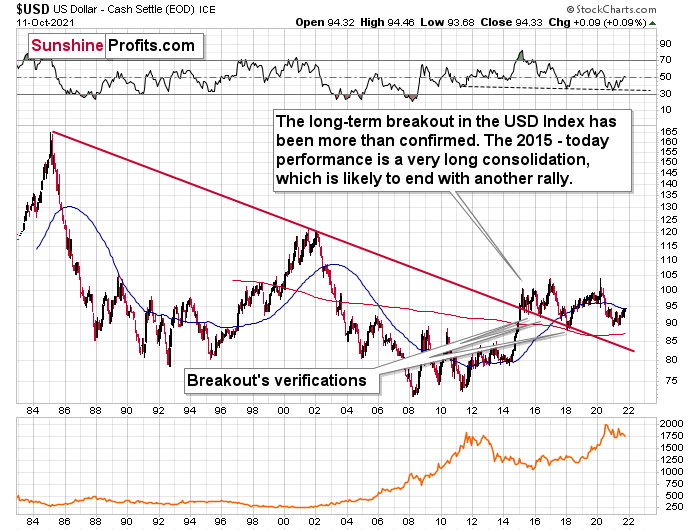 As the drama unfolds, the ~98 target is likely to be reached over the medium term, and the USDX will likely exceed 100 at some point over the medium or long term. Keep in mind though: we’re not bullish on the greenback because of the U.S.’ absolute outperformance. It’s because the region is fundamentally outperforming the Eurozone, the EUR/USD accounts for nearly 58% of the movement of the USD Index, and the relative performance is what really matters.

In conclusion, the USD Index remains ripe for an upward re-rating and the greenback’s ability to shrug off bad fundamental news has cemented its bullish foundation. Moreover, with the EUR/USD holding on by a thread, the currency pair’s pain is the USD Index’s gain. In addition, with the U.S. 10-Year Treasury yield closing the Oct. 8 session at its highest level since Jun. 3 and the Fed poised to announce its taper timeline in the coming months, plenty of reinforcements support a stronger U.S. dollar over the medium term. And since gold, silver and mining stocks have strong negative correlations with the U.S. dollar, the latter’s uprising could lead to the former’s downsizing.

EUR/USD remains under pressure below 1.1600, as the US dollar extends the late Wednesday bids amid broad risk-aversion. Traders turn cautious amid stagflation fears and ahead of Thursday's ECB policy decision and the US Q3 GDP release.