The DAX is showing strong movement in both directions, but has only managed slight gains. Currently, the DAX is at 11,591, up 0.20% on the day. In economic news, German CPI rebounded in February with a gain of 0.4%, after a decline of 0.5% a month earlier. On Friday, the eurozone releases consumer inflation data.

Another vote, another defeat for Prime Minister May in parliament. On Wednesday, lawmakers voted to remove the option of a no-deal Brexit, but it should be noted that this vote is not binding on the government. With parliament set to vote on Thursday on a request to extend Article 50, market focus will be on Brussels as well as London. Will the E.U. agree to an extension? If so, will there be any strings attached? The DAX lost ground in the Asian session, but has since recovered. Traders should be prepared for further volatility from European stock markets after the parliament vote on Thursday.

The eurozone manufacturing sector has struggled, but there was some positive news on Wednesday, as the reading of 1.4% was the strongest gain since August 2017. Germany, the largest economy in the eurozone, has been posting weak manufacturing data. Industrial production fell 0.8% in January, missing expectations. The indicator managed only two gains in the second half of 2018 and has started 2019 with a decline. Last week, factory orders plunged 2.6%, marking a third successive decline. The U.S-China trade war has dampened global growth, which has reduced the demand for German exports and weighed heavily on manufacturing activity.

Markets turn to the Eastern Front 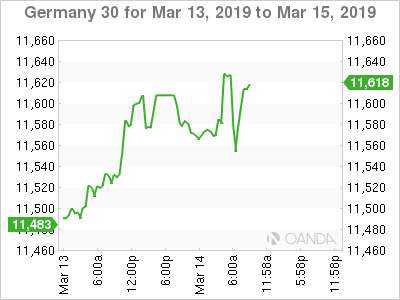