The DAX has posted considerable losses on Friday. Currently, the index is at 12,096, down 0.60% on the day. On the fundamentals front, there are no major German or eurozone events. In the U.S., today’s highlights are the May retail sales reports. Core retail sales are projected to climb to 0.5%, after a weak gain of 0.1% a month earlier. Retail sales are expected to rebound to 0.7%, after a reading of -0.2% in April. The week winds up with the UoM Consumer Sentiment report, which is expected to fall to 98.1, after an outstanding reading of 102.4 in the previous release.

Broadcom, the gigantic Singapore chipmaker, has dragged down European stocks on Friday. Broadcom has forecast a hit of some $2 billion to revenue, another casualty in the bitter trade war between the U.S. and China. The negative news has hurt technology stocks, and the tecDAX, which tracks the 30 largest technology companies in Germany, is down 1.1% on Friday. The DAX is also trading lower.

All eyes are on U.S. consumer spending data. Inflation numbers for May were soft, but the markets are counting on better news from consumer spending data. Retail sales and core retail sales are expected to rebound in May, and these numbers could play a crucial role in the Federal Reserve’s forward guidance for rates. The markets are prepared for a rate cut, possibly two, in the second half of the year. The CME Group has set the odds of a July cut at 62% and another cut in September at 55%. Lower interest rates make the U.S. dollar less attractive to investors, so some headwinds could be ahead for the greenback. 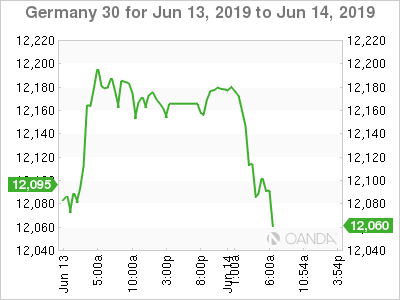