The DAX index has jumped in the Wednesday session. Currently, the DAX is trading at 11,606, up 1.07% on the day. On the release front, German industrial production posted a gain of 0.2%, above the estimate of 0.0%. Eurozone retail sales improved to 0.0%, shy of the estimate of 0.1%. On Thursday, Germany releases trade balance and the eurozone publishes its economic forecasts.

European markets have posted gains on Wednesday, as investors expressed relief that the mid-term election uncertainty is over and the slugfest ended up as a split-decision. Had the Democrats taken back both houses of Congress, Trump would have been a lame duck for the next two years, and he would have had great difficulty passing any further market-friendly reforms. After a rough October for the DAX, investors are hoping that the positive start to November continues.

All eyes were on the U.S mid-term elections, and when the dust settled, both parties could claim a victory of sorts. The Democrats regained control of the House of Representatives for the first time since 2010, but the Republicans maintained control of the Senate, and have increased their majority. The results are a setback for President Trump, as the Democrats will be in a stronger position to derail Trump’s plans to boost fiscal stimulus and lower taxes. Investors have reacted on Wednesday by sending the dollar lower. Investors will be shifting focus to the Federal Reserve, which releases its monthly rate statement on Thursday. The Fed is expected to maintain the benchmark rate at a range of between 2.0% and 2.25%. A hawkish rate statement could boost global equity markets. 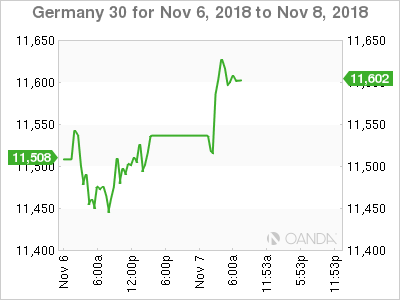