The current account deficit widened in Q1, driven by a larger trade deficit as well as a decrease in primary income.

The red ink in the U.S. current account widened from a revised deficit of $114.0 billion in Q4-2016 to $116.8 billion in the first quarter (top chart). The actual figure was less severe than the consensus forecast, which called for a $123.8 billion deficit. The current account balances for the previous quarter was also revised down. The deficit now represents 2.5 percent of GDP from 2.4 percent in the fourth quarter. 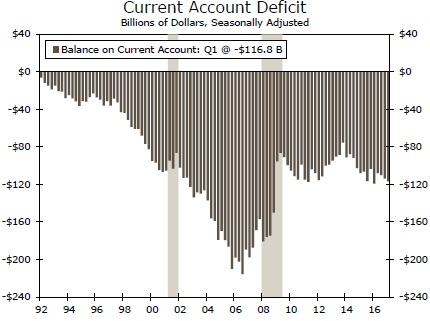 The overall current account deficit widened in the second quarter largely because the trade deficit in goods widened by $5.3 billion. The widening trade imbalance in goods reflected in the current account release is consistent with the nominal monthly trade balance in goods, which fell further in April. Overall, exports of goods and services plus income receipts increased $22.5 billion in the first quarter as imports of goods and services plus income payments increased $25.2 billion. Within this figure, the level of goods exports increased $13.1 billion–not enough to offset the $18.4 billion increase in goods imports. The increase in goods imports mostly reflects increased imports of industrial supplies and materials, crude oil and automotive vehicles and parts.

There has been recent weakness on the export side of the ledger with exports of automobiles and parts down $532 million and consumer goods off $720 million in the month of April. The overall value of exports has declined now for two consecutive months. Moreover, the overall value of imports in April rose nearly $2 billion, with consumer goods imports up $1.9 billion during the month. We expect that export growth generally will remain positive going forward, although it likely will fall short of import growth. Therefore, real net exports probably will continue to exert some headwinds on overall GDP growth in coming quarters.

The surplus on primary income, or the amount of money Americans receive from their direct investments abroad, fell by $3.6 billion in the first quarter. The red ink in the primary income account was offset by the secondary income balance, which increased $5.8 billion on the quarter. In Q1, there was nearly $90.1 billion worth of new foreign direct investment (FDI) in the United States, a marked increase from the $17.6 billion figure registered in Q4 2016 (bottom chart). Likewise, purchases of U.S. stocks and bonds by private foreign investors, represented by portfolio investments, continued to strengthen, rising $128.6 billion on the quarter. The recent bull market run in U.S. equities is continuing to attract foreign investment. As long as the underlying economic fundamentals of the U.S. economy remain solid, at least relative to other countries, then foreigners likely will continue to invest in the United States. 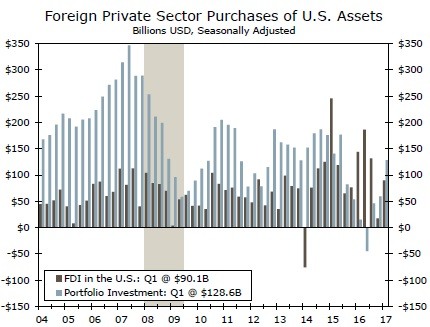