The British pound was little changed after relatively mixed economic data from the UK. According to the statistics office, the country’s economy expanded by 2.3% in April, the fastest pace of recovery since the summer of 2020. It also helped to offset the 1.5% decline in the first quarter as the government enforced a new lockdown. This growth was mostly attributed to the services sector that is making a strong recovery. The economy is still 3.7% smaller than before the coronavirus pandemic. Still, further data showed some weakness in April. The manufacturing and industrial sectors declined. Another risk for the UK is that the number of coronavirus cases has reportedly risen, meaning the government may delay the reopening set for later this month.

The price of crude oil tilted higher after a relatively positive report by the International Energy Agency (IEA). The France-based agency said that it expects demand will outpace supply by December this year. Precisely, it expects that global demand will increase by more than 5.4 million barrels this year as countries roll out the vaccines. It expects that the amount of oil consumed per day will increase to 99.5 million barrels. The report came at a time when many countries in the emerging and developed markets are reporting strong economic growth numbers.

The euro declined on Friday as investors continued to reflect on the ECB decision made yesterday and the strong American inflation data. The ECB left interest rates unchanged as most analysts were expecting. At the same time, US inflation rose to the highest level since 2008. A report today from Spain showed that the headline consumer price index rose by 2.7% on a year-on-year basis while harmonized inflation rose by 2.4%. In the US, the ten-year bond yield fell to 1.447%, substantially lower than this year’s high of 1.76%.

The EURUSD declined from this week’s high of 1.2220 to 1.2136 as traders continued to reflect on the ECB decision and the US inflation data. On the four-hour chart, the pair struggled to move above the upper side of the descending trendline. It moved below the Ichimoku cloud and is at the 23.6% Fibonacci retracement level. It also fell below the 25-day moving average. Therefore, the pair will likely keep falling as traders aim for the next key support at 1.2100. 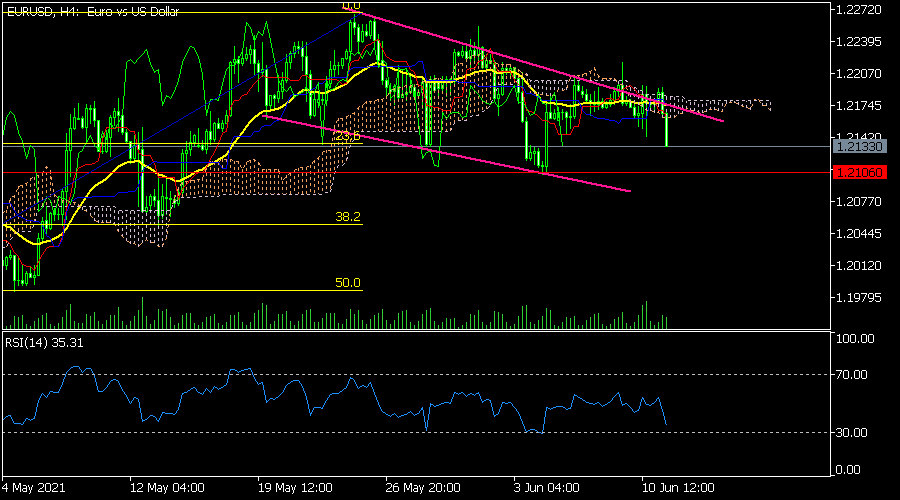 The EURGBP pair declined sharply today. It fell to a low of 0.8570 from yesterday’s high of 0.8642. On the four-hour chart, the pair approached the key support level at 0.8560, which was the lowest level since May 12. The pair also moved slightly above the 61.8% Fibonacci retracement level. It is also below the 25-day and 15-day moving averages while the Relative Strength Index (RSI) moved below the ascending trendline. Therefore, the pair may keep falling as bears target the next key support at 0.8560.

The BTCUSD pair rose slightly today even as concerns of regulations remained. On the four-hour chart, the pair is stuck at the descending trendline while the 25-day and 15-day moving averages have made a bullish crossover. The RSI has also moved to 58. Therefore, a complete bullish breakout will be confirmed if the price manages to move above the descending trendline. If it happens, the next key level to watch will be 39,000.