With the Federal Reserve and markets on recession watch, the US consumer continues to send conflicting signals. Confidence has plunged over the past year as inflation has soared. But despite the highest prices in four decades, US households have kept spending. The hope that the Fed can engineer a soft economic landing will remain alive until the American consumer rolls over.

Consumer Confidence from the Conference Board is expected to fall to 100.4 in June from April’s 103.2.

Consumer Sentiment in the Michigan Survey dropped to 50 this month, its lowest score in the 44 year history of the modern poll. Consumer attitudes started to collapse last August when the index unexpectedly sank to 70.3 from 81.2. The 38% decline in 11 months is one of the steepest on record. Inflation has been the chief culprit, cited consistently by consumers as the cause of their economic difficulties and unhappiness. 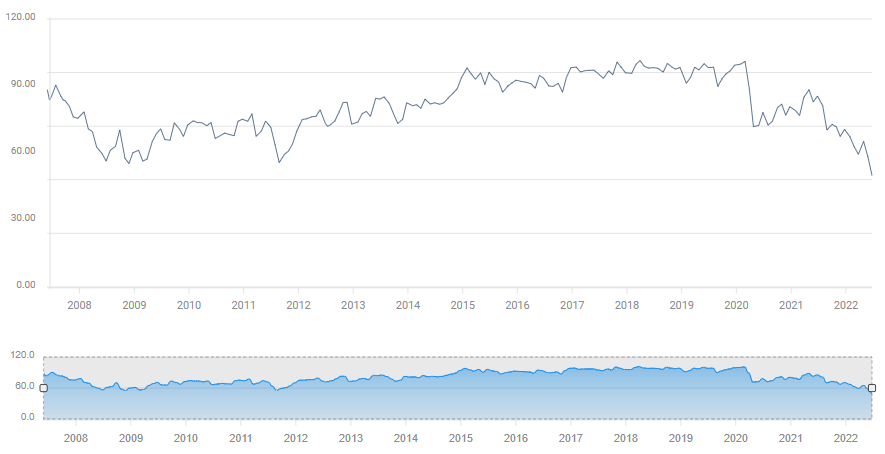 While American consumers have voiced increasing dissatisfaction with the state of the economy and their own personal economic situation, their spending habits have barely changed. The American economy is driven by its citizens, 70% of GDP is sourced in consumer spending.

Retail Sales have been notably stronger in the last  six months than in the prior half year. From December to May sales increased an average of 0.83% per month. From June to November the gain was 0.53%. Most if not all of that  increase was due to the rising prices, as the sales figures are uncorrected for inflation.

In comparison with 2019, with record low unemployment for most of the year, Retail Sales averaged 0.45% monthly.

The contrast with Personal Consumption Expenditures (PCE) and its real, inflation-adjusted edition is instructive. For the five months to April, PCE averaged 0.82%. Real, inflation-corrected  PCE was just 0.28%. The bulk of the PCE monthly increase, two-thirds to be exact, was due to inflation and not to rising purchase volumes. Consumers may not have stopped spending but the headline gains portrayed in the consumption figures are heavily skewed by rising prices. The actual increase in purchases seen by retailers, importers and manufacturers are far smaller.

We can assume a similar difference between the headline Retail Sales numbers and the real gains for businesses.

Wages and income have been losing to inflation for more than a year. The last time the monthly increase in Average Hourly Earnings (AHE) was higher than inflation was in March 2021.  Disposable Income averaged a 0.12% monthly gain from December to April. Real Disposable Income, corrected for inflation, was profoundly different, declining 0.42% per month.

Thus far consumers have maintained spending by dipping into savings and extending credit card debt. How long that will continue with consumers becoming more pessimistic each month is an open question.

Conclusion: Markets and the Fed

Markets are pricing a recession in the United States. The combination of inflation eroded consumer purchasing power and the Fed’s interest rate increases are expected to slow the economy sufficiently to produce a contraction in the second quarter, fulfilling the standard definition for a recession. The Fed has taken a strident tone on prices, leading markets to put the odds for a 75 basis point hike at the July 27 Federal Open Market Committee (FOMC) meeting at 92.7%.

The wild card is spending, and the lead indicator for consumption is consumer sentiment. Even though spending has held up relatively well despite the historic plunge in the Michigan sentiment number, the longer consumers are depressed the greater the likely impact on consumption.

The Conference Board Consumer Confidence number has historically been far more optimistic than its counterpart at the Michigan Survey. For instance, the June reading for Michigan at 50 is below its weakest reading for the financial crisis of 2008 and 2009. Conference Board’s May score of 106.4 and its 100.4 forecast for June are far above their sub-30 reading from that debacle more than a decade ago. 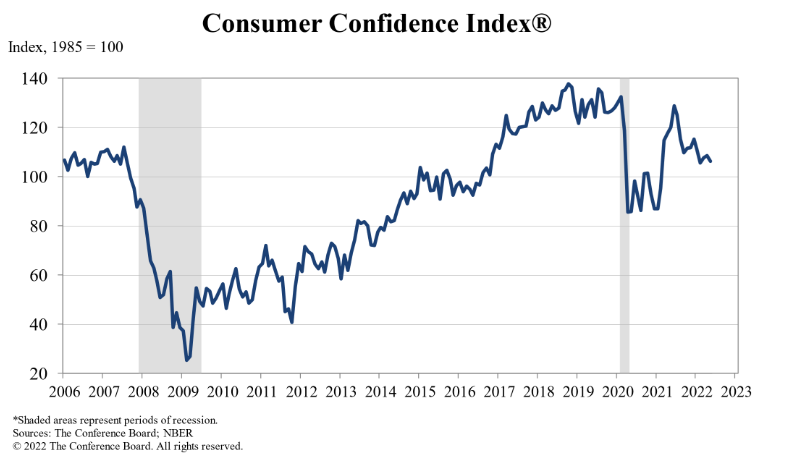 The US economy is assumed to be in or close to a recession. The weaker consumer confidence shows in June the greater the odds that the market judgement is correct.

Gold retreats towards $1,785 key support ahead of US inflation

Gold price reverses the from the monthly top, snapping two-day uptrend, as the sellers attack the $1,790 mark during early Wednesday morning in Europe. Softer US inflation can join technical details to favor XAU/USD bulls targeting $1,805.