Commodity prices had a mixed start to 2017, with the S&P Goldman Sachs Commodity Index (S&P GSCI) falling by 15% at its low point in June, driven down mainly by the decline in oil prices.  However, as the OPEC-led output restrictions started to bite, crude oil prices turned higher, with a strong performance in the fourth quarter. Industrial metals also had an impressive run in 2017, particularly copper and aluminium. Going into 2018, most investors are bullish about commodities, especially against the backdrop of a strengthening global economy.

With growth in China outperforming most economists’ forecasts last year, continued solid growth in the United States, and the Eurozone and Japan becoming the surprise economic bright spots of 2017, economies around the world are enjoying their most synchronised growth in a decade. Much of this growth is being generated by a comeback of the manufacturing sector, making commodities very attractive on the improving demand picture for 2018. Their appeal is further enhanced by their relatively low valuations in historic terms, even after the past year’s rebound, as well as other assets such as equities now looking expensive in comparison.

The S&P GSCI index ended the year up 5.8%, after reversing higher in June. Goldman Sachs is forecasting prices to increase by a further 10% in 2018.

Oil prices fell by over 20% in the first half of 2017, despite the deal by OPEC and some non-OPEC countries in December 2016 to curb supply. However, after two 9-month extensions to the original 6-month output deal, global crude stocks have started to gradually return to their five-year average, and combined with rising global demand, this has led to oil prices soaring by more than 40% from their trough in June.

Looking ahead, crude oil prices are expected to rise further this year. The output restrictions will stay in place until at least the end of 2018, although a review of the agreement is possible before the deal expires, meaning there is a risk for a negative shock for oil prices. But with world growth forecast to accelerate further in 2018, there is the potential for demand to outstrip supply sooner than the second half of 2018 that is being projected by the International Energy Agency. The possibility of supply outages in unstable regions such as Libya, Nigeria and Venezuela also pose an upside risk for prices.

The medium-term picture for both WTI and Brent prices is very bullish, with price action sharply above the moving averages following the golden cross of the 50- and 200-day moving averages back in the autumn. Analysts have raised their median forecasts for 2018 to $60 a barrel for Brent crude and $54.94 for WTI crude, according to the latest poll by Reuters.

Other energy commodities also had a strong year. Coal prices rallied by about 30% in 2017, driven in part by higher demand from China. However, supply issues also contributed to the rally, and with demand in China now considered to have peaked given the government’s tough anti-pollution measures, the outlook for coal in 2018 is bleak. In contrast, natural gas, which has had a bad year due to rising production, is expected to recover slightly in 2018, by about 3% according to the World Bank.

But the big winners for 2017 were metals. Industrial and precious metals were the two sectors with the largest gains during the year, up 31% and 12.9% respectively, according to the S&P GSCI index. The rally in industrial metals was driven by aluminium, copper, zinc, nickel and lead, which are up 34.1%, 30.8%, 29.6%, 27.5% and 23.8% respectively in 2017. The gains in aluminium and copper prices were mainly due to tighter supply, though the copper rally has intensified going into 2018 on expectations of higher demand on the back of faster growth around the world. The price of copper is considered a good indicator of global economic health as it is used intensively in electrical equipment such as motors, wiring and electronic goods.

The commodity hit a near 4-year top of $3.2955 a ton on December 29, extending the bull run that started in October 2016. Copper’s long-term uptrend was reinforced by the bullish crossover of the 50-day moving average with the 200-day one in the weekly timeframe in September.

China’s ongoing efforts to reduce industrial overcapacity and crack down on polluting plants should benefit metals such as aluminium, steel and iron ore. Though some analysts are doubtful about the degree of possible supply constraints for aluminium, while iron ore prices could come under pressure from increased production elsewhere as new plants come on stream.

Other metals that stand to gain in 2018 are nickel, lithium and cobalt, which are used in the manufacture of batteries. The growing popularity of electric cars will likely lead to greater demand for the elements needed to produce batteries used in electric vehicles. Cobalt gained over 120% in price during 2017, while lithium carbonate is up 36%.

Precious metals had a good run too, with palladium leading the pack with annual gains of about 58%. Palladium has been boosted by a switch to petrol-powered cars in certain regions such as Europe where diesel-powered cars have fallen out of favour. This in turn has led to reduced demand for another precious metal – platinum. Palladium is used in catalytic converters in petrol cars, while platinum is used in diesel cars. The price of platinum rose by only 3% in 2017, ending the year just under $925 an ounce. Silver fared slightly better, rising by almost 6%. In contrast, palladium hit a near 17-year high of $1070 an ounce.

Gold had a surprisingly decent year, rising by around 13% and briefly topping $1350 an ounce in September as geopolitical tensions related to North Korea intensified. Three interest rate hikes by the Fed failed to deter investors from buying the safe-haven asset as long-term US bond yields retreated from their highs set in March. Geopolitical tensions in the Korean peninsula and in the Middle East, as well as a resurgence of political uncertainty in Europe will likely offer further support for gold in 2018. Many analysts expect gold to continue to advance modestly in 2018 on the expectations that the US dollar will remain weak.

However, what happens to inflation in the United States and in other major economies will be key to gold’s performance in 2018. Any signs of inflationary pressures making an early appearance could lead to the outlook for gold turning bearish as monetary stimulus would need to be removed more aggressively than currently being anticipated. Apart from the Fed, central banks in the Eurozone and Japan could also surprise markets by bringing forward their stimulus exit plans. At the moment though, the medium-term outlook for gold is increasingly bullish with the spot price trading comfortably above its 50- and 200-day moving averages and eying the $1335 region before targeting the 2017 high of $1357.54.

The worst performing commodity sector in 2017 was agriculture, with prices sliding by 3%. Record production levels in 2016 and 2017 for many agricultural commodities weighed on prices during the past year as most markets were well supplied. Sugar was one of the biggest fallers, dropping by around 22% in 2017. Cocoa and coffee prices also fell sharply, while wheat and corn ended the year slightly higher. However, looking into 2018, agricultural prices could see the biggest improvement.  Reduced production and less favourable weather conditions will likely tip the demand/supply balance towards a tighter market.

As always though, the direction of the dollar will play a big role on how commodities will perform in 2018. The dollar’s near 10% decline during 2017 was a major positive for commodity prices. Commodities tend to rise when the greenback is depreciating as most are denominated in US dollars, meaning they become cheaper to buy in other currencies, thus increasing their demand. While a big fall in the dollar is not very probable, traders are not betting for major gains either given that monetary divergence between the US and other advanced economies will likely narrow even if the US tax cuts boost growth and inflation picks up. The odds of further dollar weakness in 2018 are therefore high and this could bolster the commodities rally to a more sustainable one. 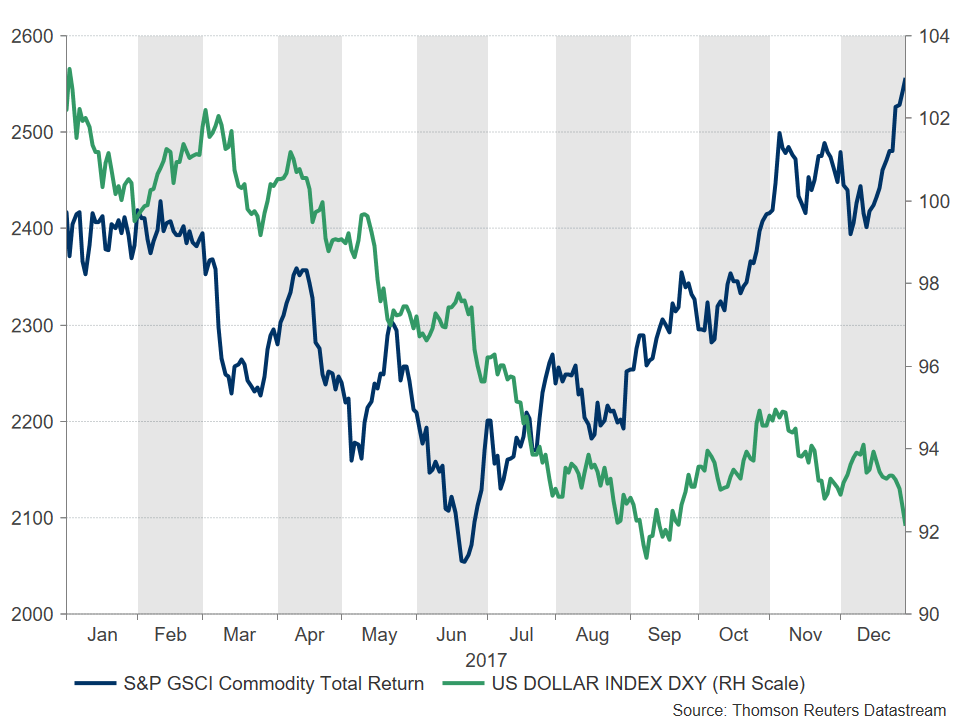 On the downside, the biggest risk could emerge from China. The world’s largest consumer of commodities has adopted a raft of steps to reform its economy during 2017, ranging from measures to cool the property market, cut industrial overcapacity, enforce tougher pollution controls, increase financial regulation and reigning in on risky lending. The impact of these measures on growth have so far been limited but the Chinese economy is expected to slow down more notably in 2018. With China’s government now seemingly more relaxed about growth falling below its 6.5% target, counter measures to boost growth are not being foreseen. This opens the prospect of demand for commodities falling short of most estimates and a big determining factor will be to what extent faster growth in other parts of the world would offset the shortfall in such a scenario.