China has been accumulating a lot of bullion over the past decade. It is also the largest producer of gold in the world and – along with India – one of the biggest consumers of the yellow metal. According to the World Gold Council’s data on the second quarter of 2017, China accounts for about 28.6 percent of the jewelry demand, and for about 26 percent of total bar and coin demand.And China – with its almost 1843 tons of gold – owns the fifth largest gold reserves in the world.

Is China thus a key player in the gold market? Well, not necessarily, as the WGC underestimates the overall demand for the yellow metal, adopting an erroneous model of the gold market. As we often repeat, the annual gold demand and supply reported by the WGC are only a tiny fraction of gold that is traded in a year. And the largest market places for gold in the world are London and New York – and these markets are where the price of gold is formed. So, although the share of Chinese investors operating on these markets is unknown, we believe that Western investors, or at least Western institutions, remain the key players in the gold market.

However, many analysts speculate that China’s gold reserves might be much higher than the official number, somewhere between 20,000 and 30,000 tons. It might be indeed the case, but it does not matter for the gold prices, as they are shaped not by stocks, but by flows of gold. And the central banks’ purchases, including transactions of the People’s Bank of China, are simply too small compared to the total volume of trade to support the price of gold.

But if only China reveals its true gold holdings, the gold prices would jump, wouldn’t they? Well, not necessarily. Remember July 2015, when the PBOC announced an almost 60 percent jump in its bullion reserves since 2009? The price of the yellow metal declined in response. It is hard to see why the announcement about past transactions and current holdings should impact the markets, which are forward-looking.

So maybe China plans to use its gold reserves to back the renminbi? And if the Chinese gold-backed currency is widely adopted, the price of gold will soar, won’t it? Unfortunately, this is not going to happen, at least not in the foreseeable future. Gold accounts for merely 2.4 percent of China’s foreign reserves. It is not enough to back the currency. Even if the true share is a few times larger, it will be not sufficient link from yuan to the yellow metal. Not to mention the IMF prohibits member states from fixing currencies against gold.

Meanwhile, about two-thirds of Chinese foreign-exchange reserves are held in U.S. dollars. And the country is one of the largest official holders of U.S. assets in the world, even despite the recent decline in the reserve assets. The developments in these enormous foreign exchange reserves are presented in the chart below: 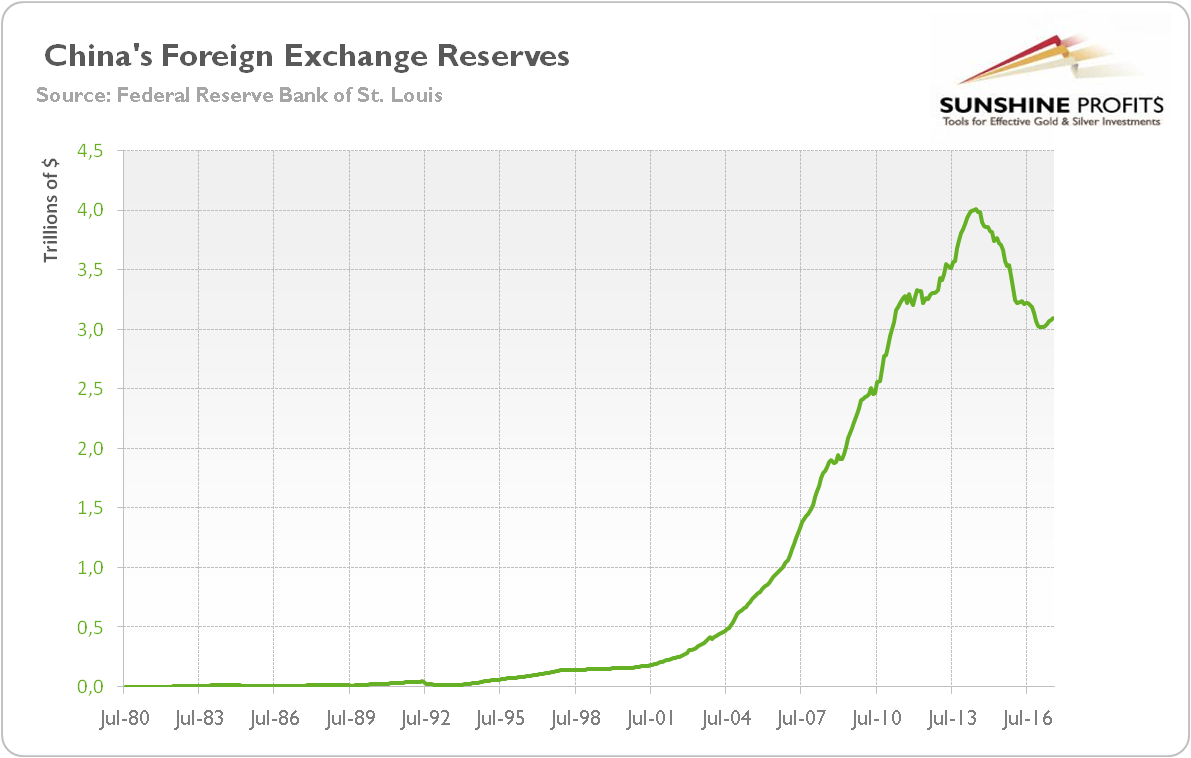 You do not have to be a Nobel laureate to figure out that it is not in China’s best interest to challenge the greenback. Actually, China has a long tradition of fixing the yuan against the U.S. dollar at a level supporting its exports. The chances that the Red Dragon will suddenly abandon its decades-long cheap policy and back the yuan by gold, are extremely low.

But even if this is the very plan of Chinese government, the question arises: why would other countries accept yuan, which is not freely convertible? Moreover, the PBOC, which stands behind the renminbi, accepts higher inflation and is less transparent than the Fed.

There are three determinants of international currency status: economic size, confidence in the currency, and depth of financial markets. And China has a significant problem with the third factor. According to Jeffrey Frankel from Harvard University, “it is not fully ready to open its domestic financial markets and let the currency appreciate.”This is why the yuan’s share of global central banks’ holdings of foreign reserves is about 1 percent. And only 16 percent of Chinese trade, and less than 2 percent of global payments are settled in yuan. Hence, the yuan has a long way toward challenging the U.S. dollar.

Therefore, investors should not believe in the gold perma-bull story about countless China’s gold reserves and the country’s efforts to dethrone the U.S. dollar and re-introduce the gold standard. Gold can rally in the long term, but precious metals investor should be more concerned about the real interest rates rather than China’s gold demand and some unproven narratives about yuan replacing the U.S. dollar already for the moment.