It's unimaginable what great progress China made in the last forty years. The rise of such economic power triggered many fears (or hopes) about the future international order. We invite you to read our today's article about the rivalry between China and the US and find whether the Red Dragon will replace America as a global hegemon. And what would such a shift mean for the gold market.

The economic growth of China raises many worries. While some people fear the slowdown or stagnation in the Middle Kingdom, others claim that China will turn the existing international world upside down.

You see, since the end of the World War II, the US has been the most powerful country in the world. The Soviet Union rivaled, but it was too weak, and collapsed eventually. The global hegemony of the US became total then.

However, China, which is now the biggest or the second biggest economy in the world, wants to challenge this order. Some experts even claim that the world enters the so-called Thucydides' trap, i.e. the situation where the growing contender thinks that its position does not reflect its strength and that the old hegemon limits his development. When we add that a rising power causes fear in an established power, we get the recipe for a war. In 12 out of 16 historical cases of Thucydides' Trap, the result was war, as the table below shows. 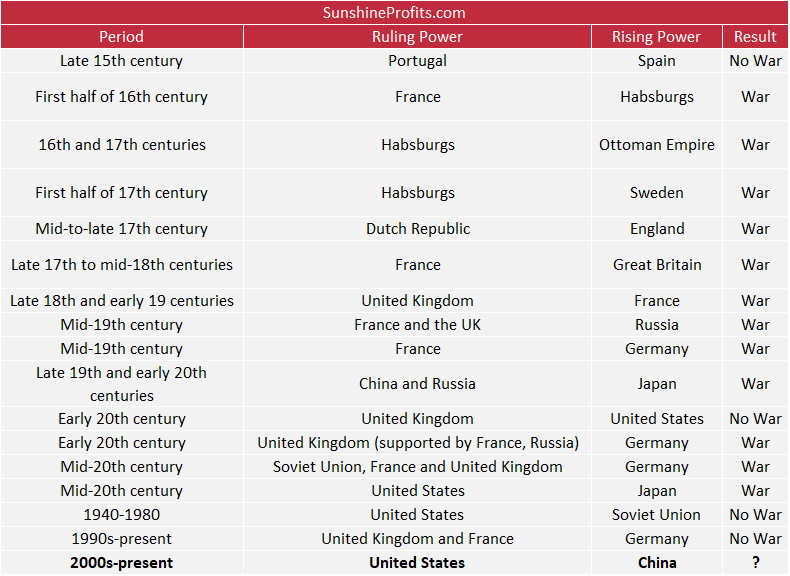 Of course, Russia also challenges the US hegemony, but the country is economically too weak. But China is different. Just one of its province has bigger GDP than Russia. And the Chinese have really ambitious plans. They want to create a New Silk Road, i.e. a trade route running through the Eurasian land, as an alternative to the sea routes, which are still controlled by the US. And – as gold bulls often repeat – China tries to weaken the dominant position of the US dollar and strengthen the yuan.

The geopolitical analyses are fascinating, but they have several flaws. First of all, there is a lot of determinism here. Geography does not determine the economic success or failure. The central idea of geopolitics is that the country has to control trade routes to prosper and rise in power. But the wealth comes from effective production, not from controlling any particular geographical area. We did not live any longer in the Middle Ages, when there were few available trade routes, so those who controlled them had monopolistic rents.

Second, the rising economic powerhouse does not have to intent to challenge the hegemon (and the war does not have to occur, as the table above clearly shows). You see, threat means a combination of capability and intentions. There is no doubt that China has substantially built up its capabilities, but there are no evidence that the country's military ambitions go substantively beyond Taiwan. You see, it might be the case that China does not want to dominate, but just to restore an equilibrium that lasted throughout much of the recorded history.

China's actual achievements are really admirable, but they prompted many analysts (and Pentagon, which has to justify its funding requests) to overblow the country's position. Yes, China is a rising power, but – given the amount of US military spending and its worldwide network of allies – it is not a global geostrategic peer equivalent in power to the latter country. The US spends on defense three or four times more than China and it can rely on help of many countries all around the world (have you heard about the Five Eyes?). Rightly or not, the US is considered to be a cool kid, while China is, well, a kind of a surveillance country – it's soft power or ability to form alliances is, thus, much weaker (can you name just two friends of China? North Korea does not count).

To be clear, we are not saying that there will be no conflicts at all. No, we are not that naïve to claim "the end of history". China may test the hegemon, but it will be wise enough to do it far from his core interests, so as not to upset the US too much. We are still decades from China being strong enough to threaten the US.

What does it all mean for the gold market? Well, gold bulls should wake up and acknowledge the reality. The Chinese yuan will not replace the greenback anytime soon, as it comprises about 1 percent of the total foreign exchange reserves held globally, still a tiny share. Investors should not buy gold counting on that.

And China will not replace the US as a global hegemon shortly. It's not strong enough. Its economy is slowing down, actually. The trade disputes and the debt burden inhibit the growth. Given the need for a shift of the economy from export-led toward consumption-led model of growth and for a careful navigating between the risk of excessive indebtedness and deleveraging too much (which could lead to a significant slowdown), triggering a military conflict with the global superpower seems to be the last thing the Chinese leaders could wish for now.

So, don't expect tectonic shifts in the international order and the resulting rally in the gold prices. However, we also have good news for the gold bulls. The yellow metal may shine even without the Atomic Parousia (what it only needs are strong fundamentals and positive market sentiment).

Surely, the current Pax Americana is not set in stone and it may change. But, be careful what you wish for; you just might get it!As for us, gold prices even at $10,000 would be a poor consolation if the world falls into nuclear winter.