Sterling went on a wild ride Wednesday in another sign of domestic worries and a market that isn't functioning properly. The Canadian dollar led the way while the US dollar lagged. All eyes turn to US weekly jobless claims due Thursday, which should be one for the ages.

The pound continues to confound. Cable took a run at 1.2000 early in London trade but fell just short and from there it was slammed down to 1.1640 over 5 hours. In another twist in then grinded back to 1.1900 after London went home. There's no explaining the intricacies of that move. Some of the late day strength was on general USD weakness but the overall move was chaotic and a sign of a skittish market at best, and a malfunctioning market at worst.

The UK Treasury said it will unveil new measures for self-employed people Wednesday and local virus experts were upbeat about the ability of hospitals to cope with the virus but more pictures of packed trains don't bode well.

The broader theme in the market was also confusion. Overall moves were smaller in all markets with a modest risk-on tone but all the moves lacked conviction. 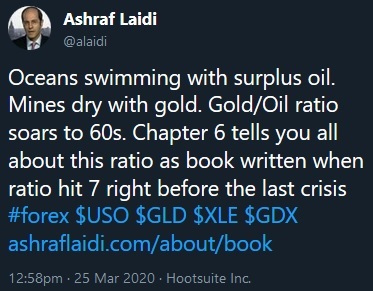 In another quirk, the US dollar, Aussie and yen were entirely unchanged against one another. The Canadian dollar, meanwhile, gained 2% against all three in part because of a +$100B stimulus package from Canada and a climb in oil.

Another thing we have to consider for CAD is yield. The Bank of Canada remains at +0.75% while all other major central banks are at least 50 bps lower. US bill rates out to three months went negative Wednesday while Canadian June paper pays 0.62%. At least for domestic safety-seeking investors, that might be some incentive to bring money home.

Looking ahead, all eyes will be on the US weekly jobless claims number on Thursday. The consensus is 1.5 million claims compared to 280,000 last week. The all-time record of 695K will almost certainly be broken and economist estimates range up to 4 million. Even a number in the 2-3 million range might be seen as 'good' news because some states are showing 20-40x more claims than normal. If there's a miss on the downside, it may simply because some states aren't able to process the benefits – there are widespread reports of outages.

Given all the quirks, it will be easy enough to explain away any number but either way the data will be a test of market sentiment. From there, traders will begin to position for weekend risks.

Over the past few weeks, euro has been one of the best performing currencies. It rose to a nearly 4 month high versus the US dollar despite weaker than expected economic data.