The US dollar strength eased slightly during the Asian session after the latest jobless claims numbers. According to the Bureau of Labor Statistics (BLS), the number of initial claims rose from 375k to 412k last week. This increase was worse than the median estimate of 359k. As a result, the number of continuing claims increased from more than 3.51k to 3.518k. The numbers came a day after the Federal Reserve delivered a relatively hawkish interest rate decision in which it hinted at a possible rate hike in 2023.

The British pound rose slightly after declining to the lowest level since May as traders waited for the latest retail sales from the UK. Economists expect the data to show that sales rose by 1.6% in May after rising by 9.2% in April. This will translate to an annualised increase of 29%. Core retail sales are expected to increase by 1.5% after rising by 9% in the previous month. This slowdown will happen as the impact of the country’s reopening starts to fade. These numbers will come a few days after the UK released strong employment and inflation data.

The Japanese yen strengthened slightly after the latest Bank of Japan (BOJ) interest rate decision. The bank maintained its policy by leaving interest rates and quantitative easing unchanged. It will also continue with its yield curve control program that will help it lower the cost of borrowing. The decision came a few hours after the country’s statistics agency published weak inflation data. The headline consumer price index (CPI) rose from -0.4% to -0.1% while core CPI rose from -0.1% to 0.1%.

The USDJPY pair declined from yesterday’s high of 110.83 to 110.20. The price moved below the upper line of the ascending channel and is at the same level as the 15-day and 25-day exponential moving averages (EMA). The signal and histogram of the MACD also made a bearish crossover pattern. Additionally, it is forming a head and shoulders pattern. Therefore, it will likely keep falling as bears target the lower side of the channel at 109.66. 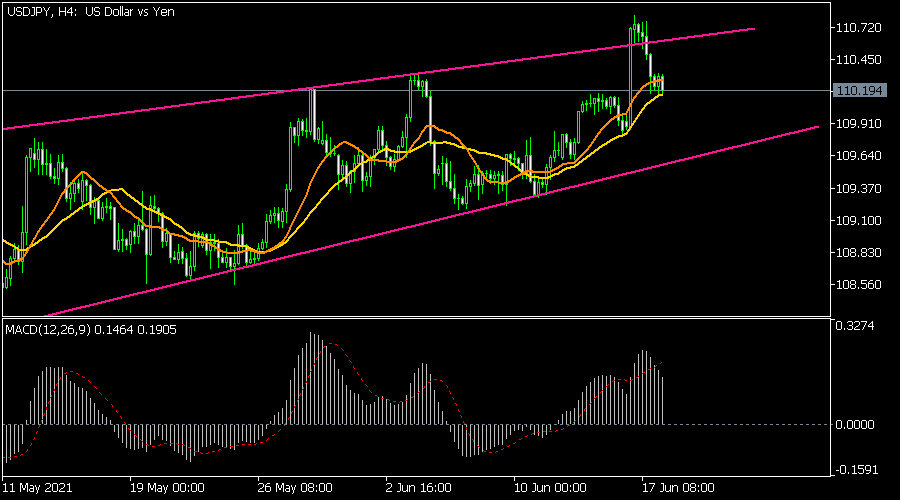 The EURUSD pair declined to 1.1890, which was the lowest level since April as the US strength accelerated. On the four-hour chart, this price was along the 61.8% Fibonacci retracement level. The pair has also moved below the short and longer-term moving averages while the awesome oscillator moved below the neutral line. The Relative Strength Index (RSI) has also moved to the oversold level of 22. Today, the pair may have a relief rally as some investors rush to buy the dips.

The GBPUSD pair declined to 1.3894, which was at the same level as the 61.8% retracement level. It was also the lowest level since April. It then rose slightly to the current level of 1.3930. The pair is below the 25-day and 15-day moving averages while the Relative Strength Index (RSI) has fallen to the oversold level of 30. Like the EURUSD, it may continue rising and then resume the downward trend.

EUR/USD is trading below 1.19 but above the daily low as markets are lifting their heads from Monday's concerns about slower growth following the disappointing ISM Manufacturing PMI. US Treasury yields are off their lows and covid headlines are eyed.

GBP/USD is trading around 1.39, marginally higher, as UK covid cases extend their drop toward 20,000. The broader market mood is also calmer despite growth worries.