Most spending components posted record rates of growth as the economy re-opened. However, growth is set to slow sharply in Q4, and new COVID cases pose a downside risk to our projected 6.1% Q4 growth rate.

U.S. real GDP jumped at an annualized rate of 33.1% in Q3-2020 relative to the second quarter (top chart). Although this is an eye-popping number, it came as little surprise because previously released monthly data indicated that real GDP would likely grow at a record pace in the third quarter. Nevertheless, the level of real GDP still remains 3.5% below its peak in Q4-2019. In other words, the size of the American economy at present is 3.5% smaller than it was immediately before the COVID pandemic struck the economy. 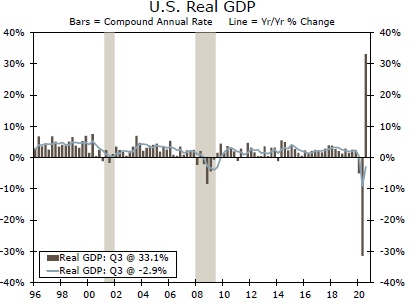 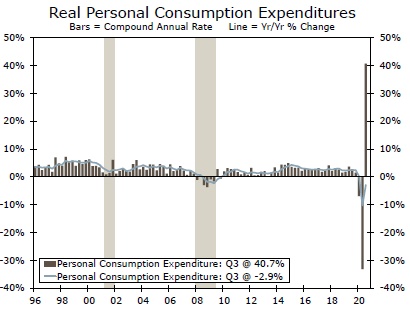 There were other areas of strength in the underlying components, which also reflect the re-opening of the economy in recent months. Business spending on equipment jumped 70.1% in Q3, easily offsetting the 35.9% drop that occurred in the second quarter, and residential construction shot up 59.3%, which is another indication that the nation's housing market is alive and well (bottom chart). That said, non-residential construction spending slid 14.6% in the third quarter, which marks the fourth consecutive quarter in which this spending component has declined. Weakness in nonresidential construction reflects, at least in part, the woes in the nation's energy sector resulting from low energy prices. Net exports sliced 3.1 percentage points off of the topline GDP growth rate, but a sharp rebound in stock-building—businesses added to inventories at an annualized rate of $286.1 billion—boosted GDP growth in Q3 by 6.6 percentage points. 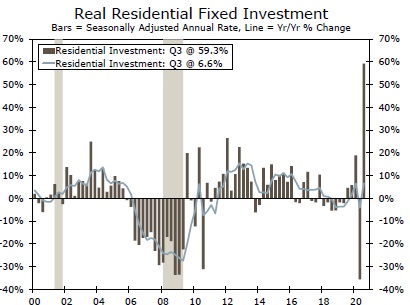 Although real GDP grew at a record pace in Q3-2020, growth in the fourth quarter is set to slow sharply. We currently project that real GDP will grow at an annualized rate of 6.1% in Q4. That said, we readily acknowledge that growth in the fourth quarter may not reach that rate if some restrictions need to be re-imposed in light of the recent acceleration in COVID cases.