Central Banks will again dominate proceedings this week while economic data is on the thin side.

Within in the G10, four central banks meet this coming week including the Fed, the Bank of England (BoE), Swiss National Bank (SNB) and Norway’s Norges bank.

Only the Fed is expected to change its interest rate on Wednesday (2 pm EDT) after last Friday’s non-farm payroll (NFP) report showed robust job growth, supporting U.S economic conditions and a solid labor market that policy makers hope will eventually “fan inflation.” Fixed income traders have priced in a +25 bps hike in the fed funds to +1.5%.

On Thursday, the market is anticipating the ECB (07:45 am EDT) to divulge details of how it will begin to taper its monthly asset purchases (QE) beginning in the New Year. While the BoE (07:00 am EDT) is widely expected to keep its key rate on hold after last months increase.

Also this week, among the top U.S economic reports are consumer inflation on Wednesday and retail sales on Thursday. While in Europe, lawmakers continue to debate Brexit and weigh moves on the next step, while NAFTA negotiators meet again.

Elsewhere, in Japan, the Q4 Tankan survey will be monitored closely especially after the healthy revised Q3 GDP estimate, while in the U.K, November labor market report dominates Wednesday.

Ahead of the U.S open, Euro equities are following their Asian counterparts higher, after another record close in the U.S on Friday.

Down-under, Australia’s S&P/ASX 200 rallied less than +0.1% despite gains in commodity stocks as most bank majors pulled back. In South Korea, the Kospi closed out little changed.

In Hong Kong, stocks rose the most in nearly three-weeks overnight, as index heavyweight Tencent (telecommunication conglomerate) rebounded for the third consecutive session. At close of trade, the Hang Seng index was up +1.14%, while the Hang Seng China Enterprises index rose +1.26%.

In China, stocks rebound as Beijing considers impact of new asset management rules. The Shanghai Composite index was up +0.98%, while the blue-chip CSI300 index was up +1.65%.

Note: Chinese equities plummeted in November after Beijing issued draft guidelines to tighten rules on the asset management industry, in its latest step to fend off ‘systemic risks’ from the country’s growing shadow banking sector.

In Europe, regional indices are off their highs and trading mixed, with the exception of notable strength in the FTSE100 trading higher by over +0.5%. 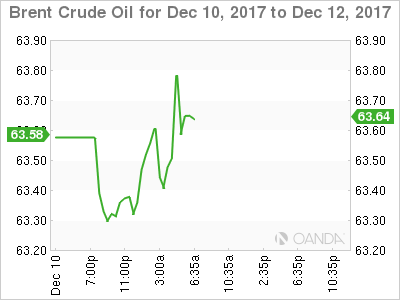 Oil prices have edged a tad lower as ongoing output cuts led by OPEC are being countered by rising U.S drilling activity that points to a further increase in U.S production.

Note: Both Brent and WTI crude oil settled more than +1% higher on Friday, and oil prices have gained well over a third in value from their 2017 lows.

The gains are largely due to production cuts by the OPEC and non-OPEC producers, including Russia, which have been in place since the start of 2017.

However, the effect of these cuts are being undermined by rising output from the U.S, which is not participating in the deal to voluntarily withhold production.

Data on Friday from Baker Hughes noted that the number of rigs drilling for new oil output in the U.S rose by +2 in the week to Dec. 8, to +751, the highest level since September.

Note: Kuwait’s oil minister said yesterday that OPEC and other oil producers would study before June the possibility of an exit strategy from the oil supply-cut agreement.

Gold prices have ticked up a tad amid a softer dollar ahead of the U.S open, but the ‘yellow’ metal lacks impetus to push higher weighed by expectations of a Fed interest rate hike Wednesday stateside. Spot gold is up +0.2% at +$1,249.90 an ounce. 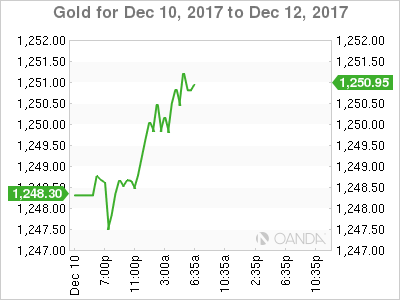 The gap between the benchmark German Bund and the U.S 10-year Treasury yield are close to it’s widest in seven-months ahead of the U.S open as the fiscal and policy paths diverge. The U.S/ German 10-year yield gap reached +208 bps earlier this morning, just shy of the +209 bps eight-month high hit earlier in December.

The paths are expected to deviate even further as President Trump pushes a tax overhaul that could put the U.S economy at risk of overheating and reason why fixed income traders are starting to price in multiple rate hikes from the Fed in 2018, after an almost-certain hike this week.

Note: Despite pressure from the divergence being most pronounced in the short end of the yield curve, the U.S Treasury curve is close to its flattest in a decade. However, the long-end is being impacted particularly after the risk of a U.S government shutdown last weekend was averted. 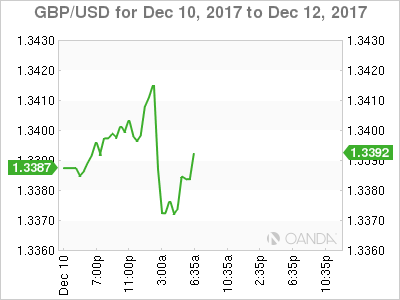 4. Sterling back to pre-Brexit breakthrough levels

FX markets are expected to remain range bound ahead of a plethora of rate decisions on Thursday. Aside from the Fed (Wednesday), within the G10, there is the BoE, Norges and SNB on Thursday. While in emerging markets there will be Indonesia, Philippines, Turkey, Colombia, Mexico and Chile deciding on rates.

Amongst the majors, sterling (£1.3375) is back to trading around the levels it was before the E.U said sufficient progress has been made to move on to trade negotiations with the U.K on Friday.

The pound reached a peak on Friday of £1.3521 outright, and €0.8690 per Euro. To many, it remains unclear exactly what progress has been made, especially regarding the Irish border. Weekend press includes a report that a number of non-EU countries have voiced their displeasure at the prospect of the U.K getting a special deal. 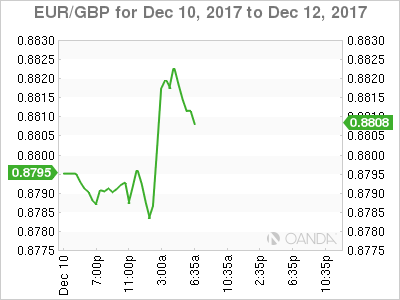 Trading in Bitcoin futures began in Tokyo last night, as Cboe Global Markets became the first major exchange to offer the contracts pegged to the cryptocurrency.

Similar contracts will start trading in a week on the CME Group – it’s a test whether institutional money will go after Bitcoin, which so far has mainly attracted individual investors.

Note: The virtual currency has divided opinions among financial executives and central bankers worldwide about its legitimacy as an asset. 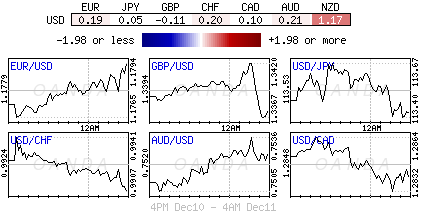