The Bank of Canada will have a monetary policy decision this Wednesday, the first lead by new Governor Tiff Macklem. A couple of weeks ago he offered his first speech as governor, and reaffirmed that the primary mission of the central bank is to deliver low, stable and predictable inflation, calling it “the foundation of economic growth.”

Policymakers are expected to maintain the main rate at 0.25%, the level set last March when the ongoing coronavirus pandemic forced them into three rate cuts within a month. Speculative interest will be looking for any change in the bond-buying program, although chances of that happening are quite a few. Meanwhile, negative rates in Canada are off the table for now, as well as a rate hike, given the high levels of uncertainty surrounding how the economic recovery will unfold.

Data points to an on-hold stance

Ever since the June meeting, Canadian numbers have been confirming that the economy had hit a bottom, which further points to a wait-and-see stance from policymakers. The country has added roughly 850K new jobs in June after recovering 290K in May. However, Canada has 1.8 million fewer jobs that there were in February.

Manufacturing output also improved, with the Ivey PMI hitting 58.2, its highest since November 2019. The Markit Manufacturing PMI remained within contraction territory but improved from 40.6 to 47.8 in June, a result of the economic reopening.

Inflation is probably the weakest indicator at this point, as yearly CPI resulted in -0.4% YoY in May, negative for the second month in-a-row. However, it’s still too early for policymakers to make decisions based on headline inflation. Governor Macklem has already acknowledged continued downward pressure on inflation.

Also, the central bank released early July the Canadian Survey of Consumer Expectation, which showed that, in the second quarter of 2020, “consumer expectations for one-year-ahead inflation rose slightly from 2.5 to 2.8 percent, close to the peak reached in mid-2018,” probably reflecting higher inflation in food prices following increased spending on store-bought food during the pandemic.

As it happens with most major central banks, policymakers these days are focused on providing support to the economy throughout the coronavirus crisis. Rates are expected to remain on hold at the mentioned 0.25% for the foreseeable future.

Back in April, the BOC launched the Government of Canada Bond Purchase Program (GBPP), a program to purchase Government of Canada securities in the secondary market, to “address strains in the bond market and to enhance the effectiveness of all the other actions have taken to support core funding markets,” which targets a minimum of $5 billion per week across the yield curve. No changes are expected in the GBPP either this month, as long-term bond yields remain at historical lows, in line with the BOC’s target.

In the last 4-weeks, major pairs have been struggling for direction, and USD/CAD has been no exception. Speculative interest is in wait-and-see mode, seesawing between hopes and fears correlated to coronavirus headlines.

The pair is hovering around the 23.6% retracement of its latest daily decline, neutral in the daily chart. A horizontal 200 DMA around 1.3490 has provided support, while sellers have been strong around the current 1.3630 price zone. The top of the monthly range comes at 1.3715. It seems unlikely that the BOC can trigger a movement strong enough to push the pair outside the mentioned boundaries.

An optimistic stance could see it pulling down to 1.3600, while below this last, an approach to the mentioned 1.3490 level seems likely, particularly considering the market is quick when it comes to selling the greenback. A test of the 1.37 area is possible only if risk aversion returns alongside dovish Canadian policymakers. 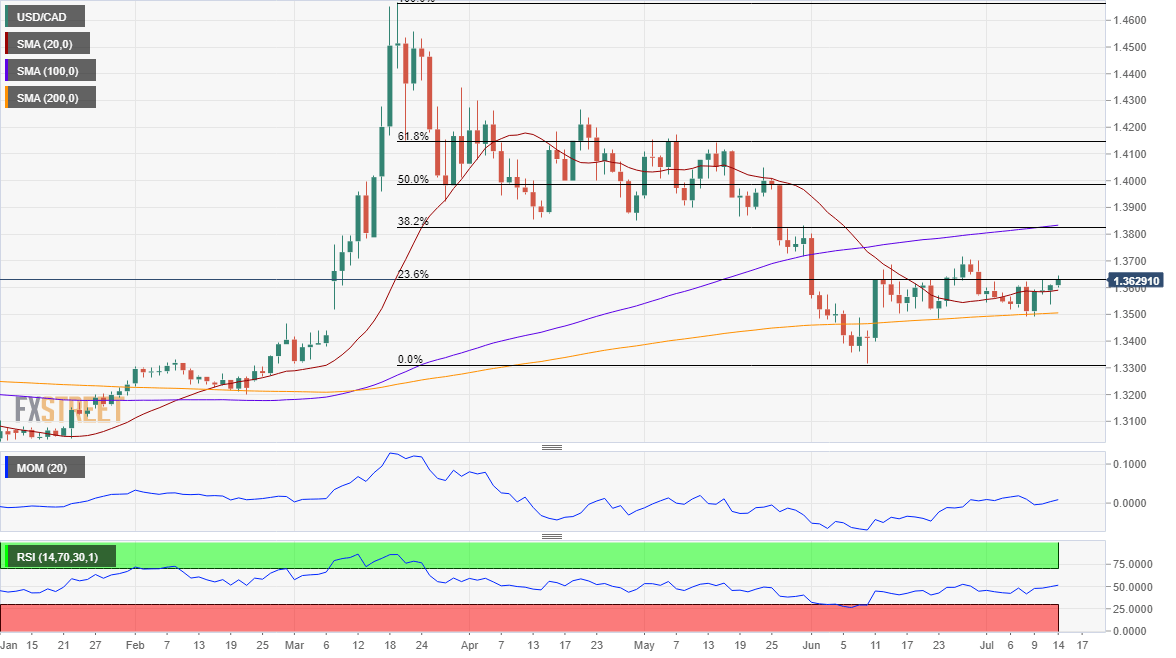