Australia will release Q3 inflation figures early Wednesday.  The quarterly CPI is expected at 1.5%, quite a recovery from the previous -1.9%. When compared to a year early, it is expected to recover from -0.3% to 0.7%. The Trimmed Mean CPI from the Reserve Bank of Australia is expected at 0.3% QoQ from -0.1%, and at 1.1% YoY from 1.2% in Q2. A significant improvement that falls short of RBA’s 2-3% target band.

The Minutes of the latest central bank’s meeting showed that policymakers are inclined to follow current inflation that their own forecasts, which means that there’s a good chance that the market will rush to price in RBA’s possible reaction to inflation figures. Should the numbers miss the market’s expectations, a cash rate cut to 0.1% could be taken for granted for the upcoming meeting, on November 4, with AUD/USD probably falling towards the 0.7000 figure.

However, the market is expecting better-than-previous numbers, based on easing restriction in Victoria’s area. Despite the RBA paved the way for a rate cut, policymakers’ perspectives are generally positive. They keep reaffirming that the economic slowdown was not as bad as initially estimated. In this scenario, upbeat figures could provide support to the Australian dollar. Still, the aussie has a limited bullish potential, amid caution ahead of the next RBA meeting.

From a technical point of view, the AUD/USD pair is neutral in the mid-term, holding above the 0.7100 figure. The daily chart shows that the pair has spent the week confined to a tight range defined by horizontal 20 and 100 DMAs. Technical indicators, in the meantime, head nowhere around their midlines. 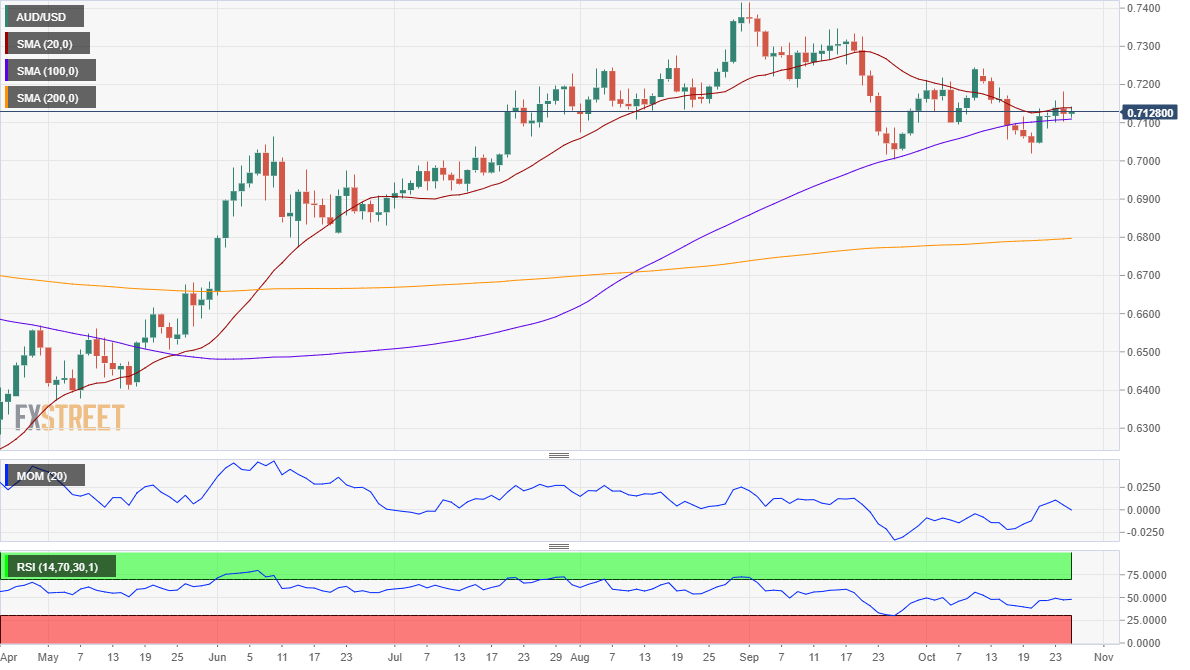