Australia released consumer inflation for the second quarter. At first glance, the annualized CPI release of 3.8% sounded alarmingly high, compared to the Q1 reading of 1.1%. Yet the Australian dollar’s reaction was muted. The reason? The reading was just a notch above the forecast of 3.7%. Most of the gain in the annualized figure was due to base effects, as CPI in Q2 of 2020 declined by 1.9%. As well, Trimmed Means CPI, which removes the most volatile items in CPI, showed a more modest increase of 1.6% YoY, up from 1.1% in the first quarter.

The reaction of RBA policymakers to these inflation numbers will be of interest to the markets. Granted, inflation is heading higher, with headline inflation slightly above the upper range of the RBA’s inflation target of 2-3%. Still, the  RBA does not appear all that concerned and can be expected to say that the rise in inflation is transitory, taking a page from the Federal Reserve’s script. The markets have accepted the “transitory” argument in the US, where inflation is much higher, so it’s reasonable to assume that Australia’s inflation won’t scare investors either. In addition, with Sydney announcing a 4-week extension of a lockdown, the RBA has one more reason to be dovish, as extended lockdowns weigh on economic growth.

All eyes will be on the FOMC policy meeting today (18:00 GMT). The US dollar has been under pressure this week, and unless the Fed hints at a taper of its asset purchases, the greenback could face further headwinds after the meeting. Any changes in the rate statement’s language could shake up the US dollar. Ahead of the FOMC meeting though, I would expect little movement in the currency markets, as investors adopt a wait-and-see position. 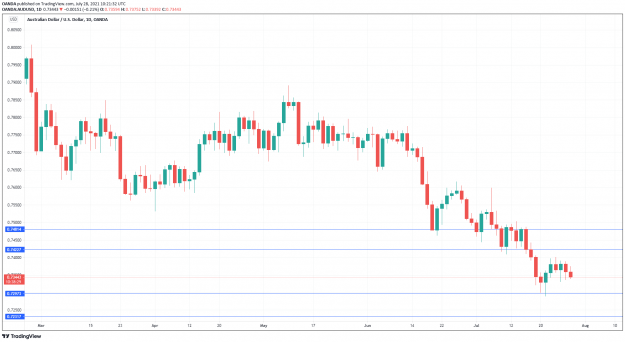