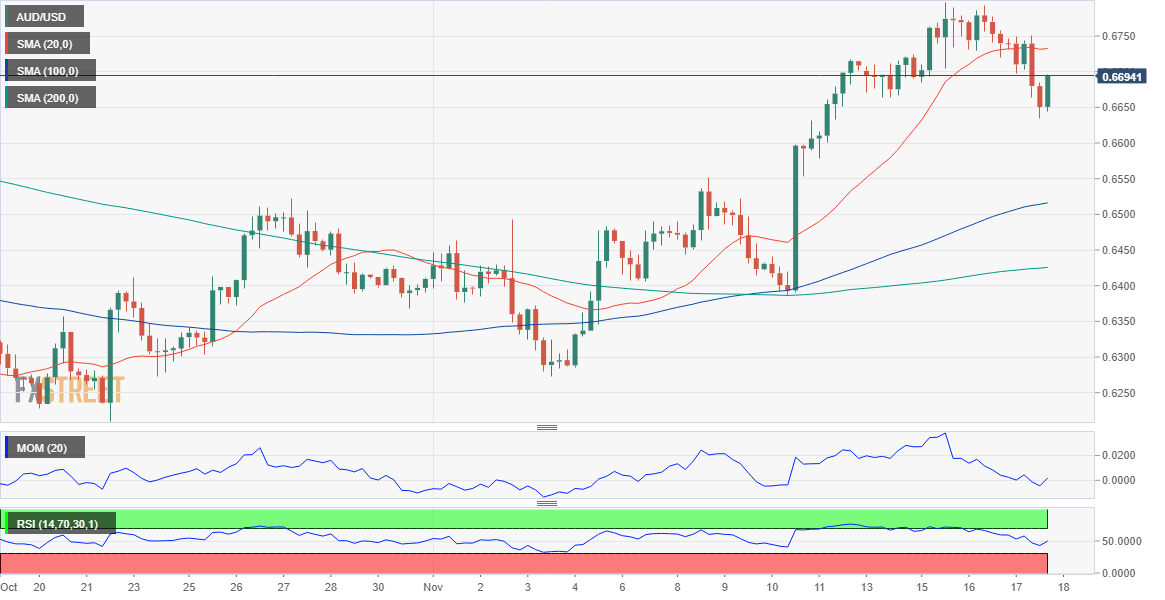 The AUDUSD pair fell on Thursday amid risk-off flows and despite encouraging Australian data. The pair settled around 0.6690 after bottoming for the day at 0.6633, a fresh weekly low. The pair bounced in the American session as Wall Street managed to erase much of its intraday losses ahead of the close. Nevertheless, global stocks traded with a sour tone, underpinning the greenback.

Australia added 32.2K new jobs in October, much better than the 15K anticipated by the market. Furthermore, the country created 47.1K new full-time positions, while part-time jobs declined by 14.9K. Also, the unemployment rate declined from 3.5% to 3.4%, beating expectations of 3.6%, while the participation rate held steady at 66.5% in the month. The Oceanic country's macroeconomic calendar will remain empty on Friday, while the US will release minor housing-related figures.

From a technical perspective, the daily chart for the AUDUSD pair suggests a bearish extension could be expected ahead of the weekend. The pair is ending the day below a mildly bearish 100 SMA, although the 20 SMA continues to advance below the current level. Technical indicators, in the meantime, ease from overbought readings, holding well above their midlines.

In the near term, and according to the 4-hour chart, the risk skews to the downside, although an upcoming decline is not yet confirmed. The pair has spent most of the day below a flat 20 SMA while the longer moving averages continue to advance below the current level. The Momentum indicator reaches fresh weekly lows within negative levels, while the RSI bounced but remains below its 50 line.

View Live Chart for the AUDUSD