The AUD/USD pair closed the first four days of the week in the positive territory and touched its highest level since February 2019 at 0.7228 during the Asian trading hours on Friday. Although the pair staged a technical correction and pulled away from its highs, it finished the sixth straight week in the positive territory and gained more than 4% in July.

The unabated selling pressure surrounding the greenback remained the primary driver of AUD/USD's movements throughout the week. Earlier in the week, the Reserve Bank of Australia (RBA) announced that the Mean Consumer Price Index (CPI) in the second quarter dropped to -0.1% from 0.5% in the first quarter on a quarterly basis. Additionally, the annual rate slumped to 1.2% and came in lower than the market expectation of 1.4%.

Later in the week, the ANZ reported that its Business Confidence Index worsened to -31.8 in July and the Activity Outlook Index edged lower from -6.8% to -8.9%. Nevertheless, AUD/USD's downside remained limited as the USD struggled to find demand.

After concluding its two-day meeting, the FOMC announced on Wednesday that it left its policy rate, the target range for federal funds, unchanged at 0%-0.25% as widely expected. In its policy statement, the FOMC repeated that it remains committed to using its full range of tools to support the economy. During the press conference, FOMC Chairman Jerome Powell noted that high-frequency macroeconomic data was pointing out to a slowdown in the pace of recovery since mid-June. However, Powell offered no fresh hints regarding the possibility of introducing yield curve control or negative interest rates.

Following the FOMC event, the USD started the day on a strong footing on Thursday and caused AUD/USD to slide toward 0.7100. However, the all-important growth data from the US didn't allow the greenback to preserve its strength. In its flash estimate, the US Bureau of Economic Analysis reported that the real Gross Domestic Product (GDP) contracted at a record pace of 32.9% on a yearly basis in the second quarter. The 10-year US Treasury bond yield lost nearly 10% in the second half of the week and slumped to its lowest level since late April, forcing the USD to continue to suffer losses against its major peers.

Reflecting the broad-based USD weakness, the US Dollar Index (DXY) lost more than 1% on a weekly basis and touched its lowest level since March 2018 at 92.55.

On Monday, the ISM's Manufacturing PMI data from the US will be watched closely by the market participants. The market expectation points out to a contraction in the manufacturing sectors' economic activity with the PMI dropping to dropping to 48.4 from 52.6 in June. A worse-than-expected reading could revive concerns over a sluggish recovery and put additional weight on the USD's shoulders.

On Tuesday, the RBA will announce its interest rate decision and release the policy statement. Earlier this week, Christopher Kent, Assistant Governor of the RBA, noted that the RBA was ready to buy government bonds if market conditions were to deteriorate significantly. Kent further added that he was not "overly concerned" about the AUD's market valuation. However, with AUD/USD rising to its highest level in nearly 18 months and inflation dropping into the negative territory in the second quarter, the RBA could start voicing concerns over AUD strength and trigger a deep downward correction.

On Friday, the US Bureau of Labor Statistics will release its monthly employment data. Investors expect Nonfarm Payrolls (NFP) to increase more than 2 million in July. If the USD's performance remains correlated with the US Treasury bond yields, a positive reading could help the DXY gain traction and weigh on the pair. On the other hand, a disappointing NFP could make it difficult for the USD to find demand as it would likely cause investors to start pricing additional Fed stimulus.

The RSI indicator on the daily chart rose into the oversold territory above 70 on Thursday and remained there despite Friday's correction. The last time the RSI advanced beyond 70, on July 21st, AUD/USD erased more than 100 pips before pushing higher.

Despite this week's impressive gains, the FXStreet Forecast Poll shows that experts are bearish in the near- and medium-term. Both the monthly and the quarterly outlooks see the pair trading below 0.7000 with 81% and 69% of forecasts, respectively, being bearish. Meanwhile, the weekly outlook suggests that the pair could retreat towards mid-0.7100s. 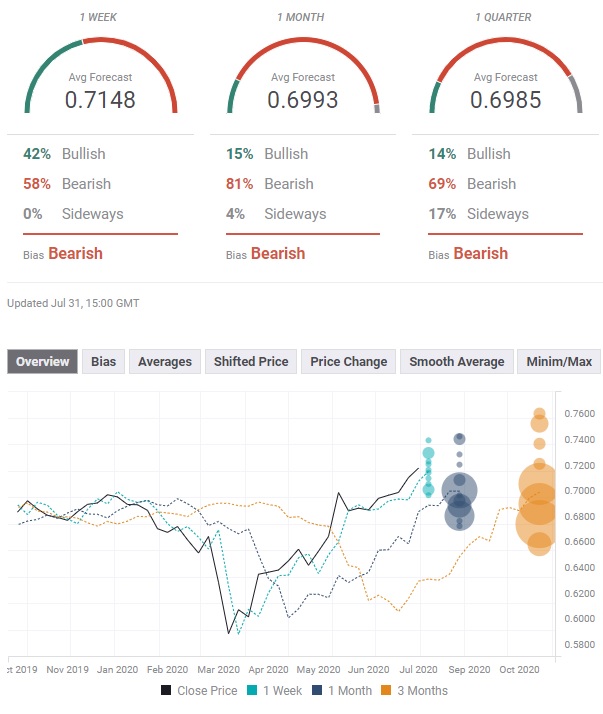