The AUD/USD pair advanced for a second consecutive week, recovering the 0.7700 threshold. The main driver was the generalized dollar weakness, amid tepid US employment data spiced with some dovish comments from US Federal Reserve head, Jerome Powell. The Fed president said that there’s a long way ahead to achieve full employment, adding that rates will likely remain at lows until the sector is fully recovered.

US Treasury yields led the way

FX movements were dependent on the dollar demand or the absence of it. And the greenback behaviour was directly correlated to US Treasury yields. Government debt yields reached levels last seen in March 2020 on Monday but quickly retreated. The dollar recovered on Friday as yields resumed their advances, with that on the 10-year note hitting 1.193% and holding on to gains.

The Australian dollar was resilient to the poor performance of global equities, also unaffected by falling commodity prices. Gold plunged at the end of the week after flirting with $1,850.00 a troy ounce, bottoming on Friday at 1,810.37.

Modest optimism persists at the end of the week. Investors’ focus is on a US stimulus program, which House leader Nancy Pelosi said she wishes to complete by the end of March, and a US President Biden announcement on a large infrastructure spending program. Biden met with a bipartisan group of senators last Thursday to discuss his campaign proposal of a more than $2 trillion infrastructure plan.

As it happens globally, Australia keeps struggling with the pandemic. The government confined roughly six million people in Melbourne and surrounding areas this Friday for five days to halt an outbreak of the UK coronavirus strain.

The macroeconomic calendar reflected the current situation. Australia published NAB’s Business Confidence, which improved in January to 10 from 5, although NAB’s Business Conditions shrank from 14 to 7 in the same month. Consumer Inflation expectations in the country hit 3.7% in February, better than the 3.4% expected.

The US released January inflation data, which was confirmed at 1.4% YoY, missing the market’s expectations, tepid weekly employment claims that printed at 793K in the week ending on February 6, and the Michigan Consumer Sentiment Index for February, which disappointed by printing at 76.2.

The US will start the upcoming week with a holiday. On Wednesday, the country will publish January Retail Sales and the FOMC Minutes.  On Friday, Markit will release the preliminary estimates of its February PMIs, with manufacturing and services output foreseen contracting but holding within expansion levels.

From a technical perspective, the AUD/USD pair retains its bullish long-term stance. The pair keeps developing far above its moving averages, with the 20 SMA heading firmly higher above the longer ones. The Momentum indicator turned lower within familiar levels and well above its midline, while the RSI indicator is neutral-to-bullish near overbought levels.

In the daily chart, the pair offers a neutral stance, with a limited bearish scope. The pair is comfortably consolidating above a flat 20 SMA while technical indicators are stuck around their midlines, lacking evident directional strength. 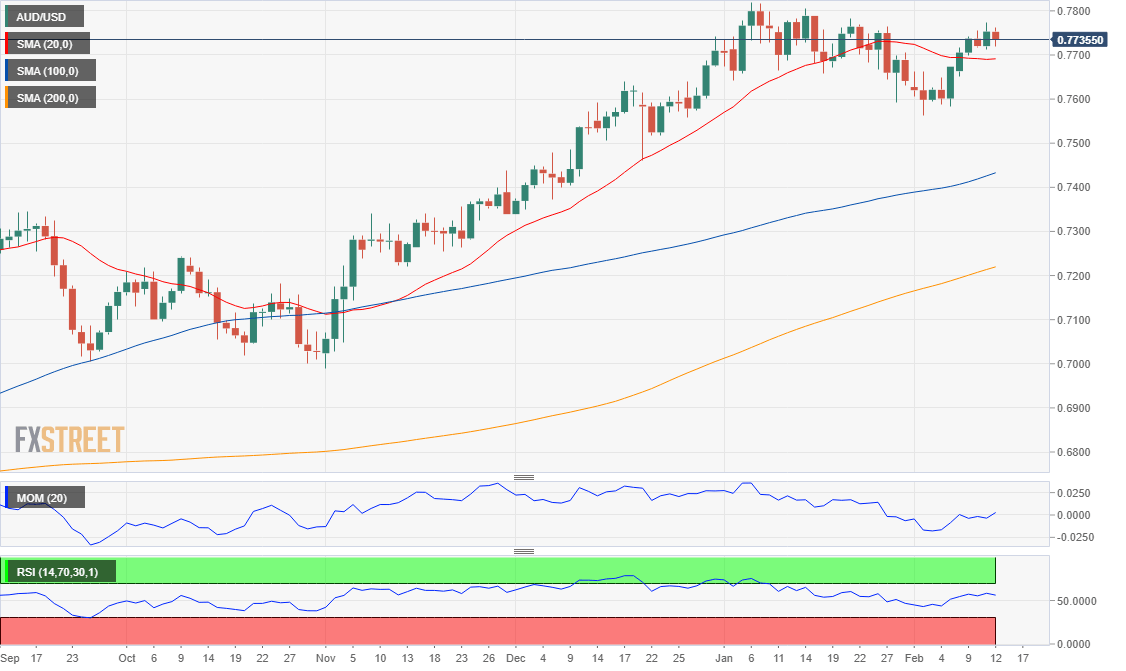 The FXStreet Forecast Poll shows that investors are willing to sell AUD/USD from the current level, as bears are a majority in the three time-frame under study, although the percentage is below 50%. There’s a high number of polled experts seeing the pair ranging. On average, the pair is seen trading in the 0.76/0.77 price zone.

A substantial bearish movement seems unlikely, according to the Overview chart, as the three moving averages maintain their bullish slopes, although with uneven strength.  The lower end of possible targets keeps increasing, as it has been settled around 0.7400, in the longer-term perspectives.

EUR/USD Weekly Forecast: It’s all about the dollar and US politics