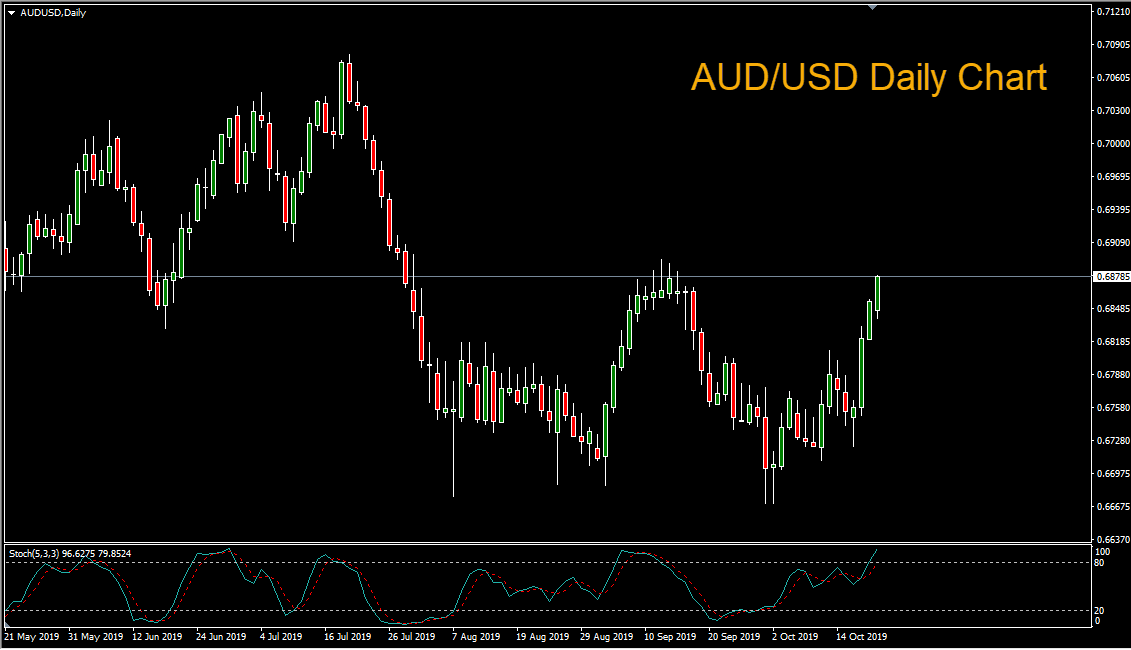 AUD/USD surged to its highest levels since September 16th in early trading on Monday. The pair was lifted by a hawkish tone in comments from Reserve Bank of Australia (RBA) governor Philip Lowe last week, in addition to strong jobs data and optimism over US/China trade.

AUD/USD soared by 1% on Thursday, after the Australian Bureau of Statistics reported that the unemployment rate fell to 5.2% in September from 5.3% the previous month, beating expectations. The figure marked the first decline in unemployment in seven months, but the jobless rate still remains higher than the RBA’s target of 4.5%.

On October 11th, President Trump announced that China and the United States had reached a tentative agreement for the "first phase" of a trade deal. Trump further lifted hopes on Friday when he stated his belief that a trade deal between the United States and China would be signed before the November 16-17 Asia-Pacific Economic Cooperation meetings in Chile. China is Australia’s largest trading partner and good economic news for China is typically bullish for the Aussie.

According to the CME Fedwatch Tool there is currently a 91% chance that the Fed will cut interest rates by a quarter-point at the October 30th meeting. The US dollar has been under pressure following the release of disappointing manufacturing and retail sales data. A lower interest rate in the US dollar reduces its appeal as an investment.

Speaking at the International Monetary Fund (IMF) in Washington on Thursday, Reserve Bank of Australia governor Philip Lowe reduced expectations of further interest rate cuts, stating that while it was possible more cuts were necessary, it should not be assumed. He added; "I think it's quite probable that we'll see a return to trend growth over the next year, which will be good.” On October 1st, the RBA cut the official cash rate by 0.25% to a new record low of 0.75%, marking the third rate cut in four months.