The AUD/USD is looking quite interesting ahead of the publication of US Consumer Price Index (CPI) later on today, with investors also keeping a very close eye on US-China trade developments. There are tentative signs that the selling phase may be over, although this could change very quickly in the event US-China trade talks collapse.

Ongoing US-China trade uncertainty has been among the reasons the Reserve Bank of Australia has been cutting interest rates aggressively in recent months, hurting the Australian dollar. That's because China is Australia's largest trading partner, so what happens at the world's second largest economy matters greatly for Down Under. But mild expectations that there will be some sort of a deal at the conclusion of this week's meeting between trade representatives of the US and China has helped to put a stop in the Aussie selling for now. It remains to be seen whether hopes will turn to reality and the two nations agree on anything this week.

Meanwhile, the Federal Reserve has turned dovish quite rapidly, which has halted or at least slowed down the US dollar rally. If today's US CPI comes in weaker than expected, then the dollar could fall back and support the likes of the AUD/USD, as calls for further rate cuts grow louder. Conversely a stronger than expected reading could reduce the odds for a rate cut at the end of the month, thus boosting the greenback.

The AUD/USD formed a doji candle on its weekly chart last week after price refused to hold below the prior low at around 0.6677/80, putting us on a bullish alert for this week. Until today, though, we hadn't seen any bullish signs, with the AUD/USD drifting lower over the past three days, suggesting the underlying bearish trend prevailed. Today, however, it is displaying a large bullish engulfing candle on the daily chart, thus erasing all of its losses from the day before and some. Unless we see a strong US inflation reading today, the AUD/USD thus looks set to squeeze the shorts further as we head towards the latter parts of the week. Key resistance and a bearish trend line comes in around 0.6800. 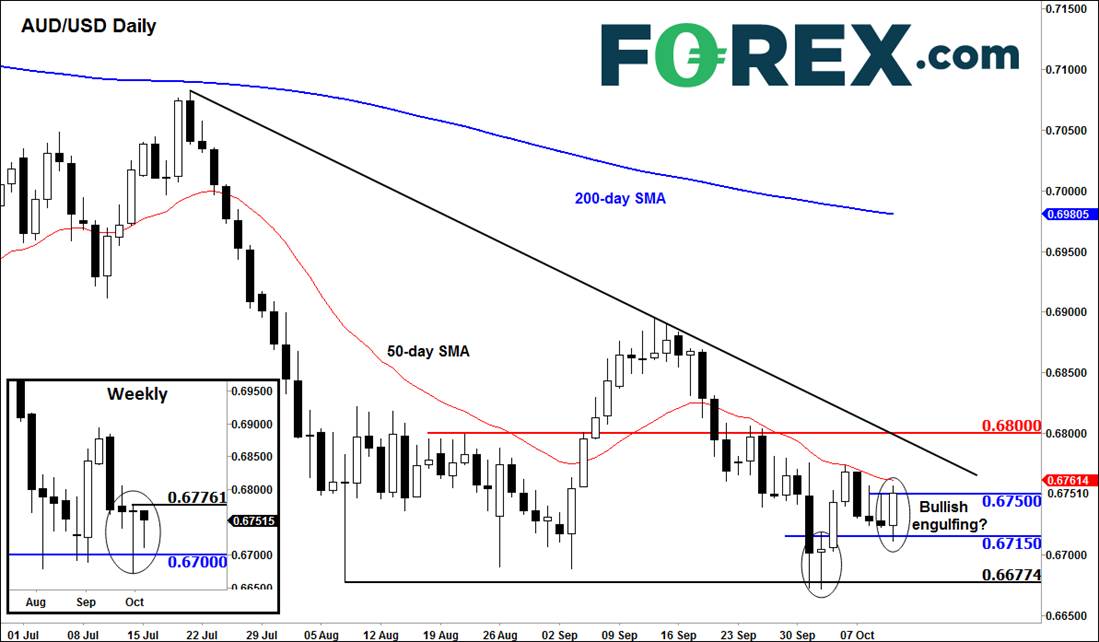