Last Thursday’s signals were not triggered, as unfortunately the support level at 0.7039 was never quite reached.

Trades may only be entered between 8am New York time Monday and 5pm Tokyo time Tuesday.

I wrote last Thursday that there was a strong battle here between bulls and bears. I thought it might take several days but it seemed the bulls would ultimately win – I just don’t see the price being forced below these (support) levels – but that does not mean it is a good time to buy yet, so it is probably best to stand aside. The first part of this analysis was a good call, but the second part wasn’t – the good buying opportunity came during the next Asian session.

The price has now failed just above the resistance level I identified at 0.7117. This may well just be a normal bearish retracement within a continuing bullish movement. A break above the earlier highs later would be a bullish sign but is unlikely to happen. I would be prepared to take a bullish bias if there is a strong bullish bounce at or very close to the nearest support level at 0.7070. There may also be new higher support at about 0.7090.

The RBA will be releasing minutes of their recent policy meeting during the Asian session, which could push the price around in an unpredictable way so be careful at that time. 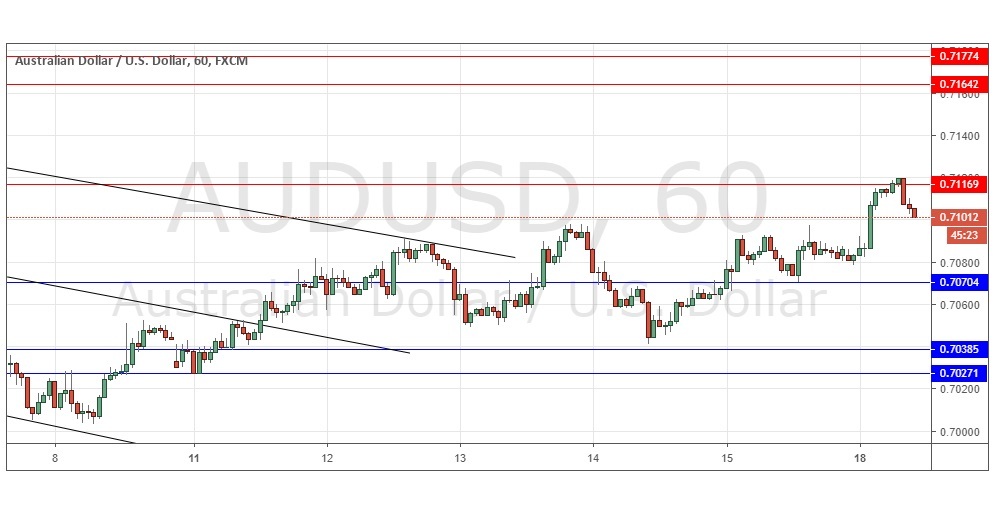 There is nothing of high importance due today concerning the USD. Regarding the AUD, there will be a release of the RBA’s Monetary Policy Meeting Minutes at 12:30am London time.