When you're worried about a recession, all data is suspicious.

Americans are unhappy. Month by month inflation is eroding household income. Producer prices are even higher than retail. In the US, where nearly all goods move by truck, diesel fuel just hit an all-time record, ensuring inflation will be higher in April and May than it was in March.

The one bright spot is, somewhat surprisingly, Americans themselves. Consumption is the lifeblood of the US economy and so far, American families have not stopped spending. The biggest reason for that resilience is the red-hot job market. Unemployment is 3.6%. Payrolls have averaged 599,000 for six months and 566,000 for a year. There were more than 11 million unfilled positions in February. Anyone who wants a job can find one.

With the Federal Reserve beginning one of its most aggressive rate cycles in history and inflation running at a four-decade high, how long can American businesses and consumers continue to fund the economic expansion?

Which brings markets to the employment report from Automatic Data Processing (ADP), due on Wednesday, the morning of the Federal Reserve meeting.

The American clients of ADP are expected to hire 395,000 workers in April, which would be about a quarter less than the six-month average. Two days later Nonfarm Payrolls are projected to add 380,000 employees, the lowest monthly total since last April.

The correlation between the private ADP report and the national payroll report is not high. Over the last year the two reports have moved in the same direction seven times and in opposition the remaining five. Nonetheless, any indication of weakness in ADP will be considered a warning for NFP.

The manufacturing Purchasing Managers’ Index (PMI) for employment from the Institute for Supply Management (ISM) displayed unexpected softness in April. The Employment Index plunged 5.4 points to 50.9, its largest single drop since the lockdown month of April 2020. The consensus forecast had been for a smaller decline to 54.7. It was the weakest employment reading in seven months and the closest to the 50 contraction limit since.

Employment in the much larger service sector will be reported on Wednesday, and is expected to drop to 51.2 in April from 54.0. This would be the second decline in four months. February’s index dropped to 48.5 from 52.3 in January.

Factory employment has long been considered the telltale for coming conditions in the overall market. The steep fall in the employment index, along with an equally unexpected drop in new orders, are warnings that all is not well in the economy.

Conclusion: Federal Reserve and the US economy

The Federal Reserve is very late to the inflation fight. Consumer prices jumped 8.5% in March, the highest in over four decades. Price increases have accelerated 70% in 11 months, from 5% last May.

Even if the Fed hikes 50 basis points on Wednesday, the fed funds rate will still only be 1.0%, not remotely high enough to tamp down inflation. The last time the US Consumer Price Index (CPI) was 8.5%, the base rate was 12.5%. 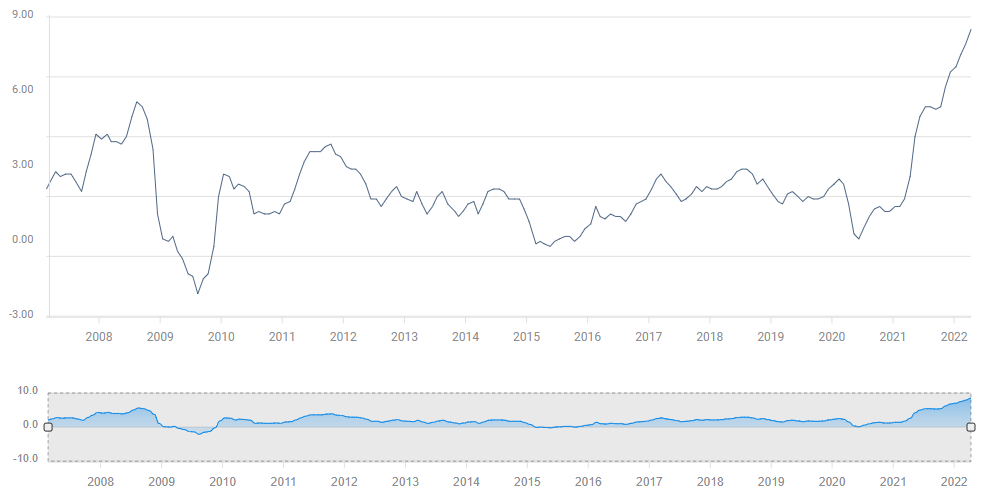 Can the Fed raise the fed funds rate to 2.75% or higher by the end of the year without causing a recession?

Have the prospective rate hikes already begun to restrain hiring? Is that the import of April's sharp decline in the manufacturing employment index?  Many analysts blamed the 1.4% contraction in first quarter GDP on the surge in imports, but preliminary GDP estimates for the second quartet are below 2% and falling.

Treasury yields and the dollar reflect the belief that the Fed will raise rates until economic conditions force it to stop. Nothing would bring the Fed program to a halt faster than a collapse in hiring. Even if that does not seem imminent, the threat is so dire that even a hint might be enough to reverse recent gains in both markets..

If ADP is as expected or better, the relief will be temporary. Given the Fed's intentions and the dangerous economic currents around the globe, from China to Ukraine, it will be many months before markets can rest easy.