Given Senators Manchin and Sinema’s efforts to constrain spending under the Build Back Better bill, it seems likely that the $3.5 trillion 10-year price tag may very well be whittled down to something less than $2.5 trillion. At the same time, I’ve heard nothing about making corresponding adjustments on the tax collection side. It seems to me that if we’re about to scale down social safety net spending, we should make adjustments to the tax features to compensate for these reductions. I favor keeping the provisions that (a) raise corporate tax rates, (b) bump up the highest marginal rates for households and individuals, and (c) add an additional surtax of 3% on those with an adjusted gross income exceeding $5,000,000 ($2,500,000 for married taxpayers filing separately); but tax rates at the lower end of the income ladder should be adjusted downward, at the same time.

Hear me out. By way of background, it should be understood that the current tax code applies a different set of tax rates to long term capital gains and qualified dividend income (henceforth LTCG) versus all other forms of earnings (henceforth regular income). (Qualified dividends are dividends from shares held for more than 60 days during the 121-day period that starts 60 days before the ex-dividend date.) The respective applicable tax brackets and rates are shown below: 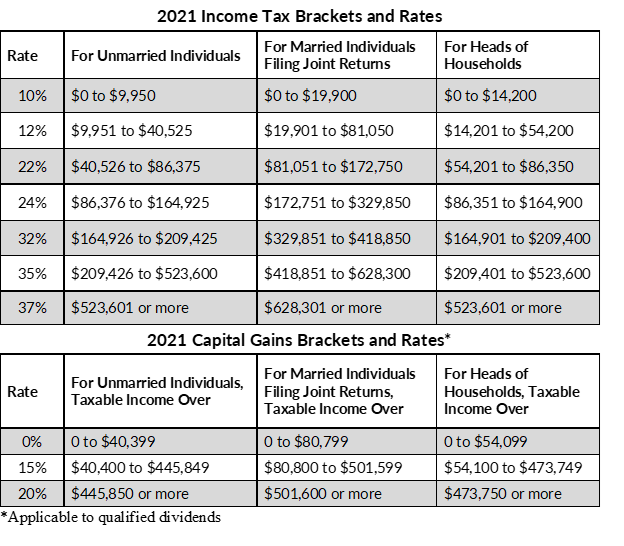 As the chart shows, we currently have seven tax brackets for regular income rising to a maximum marginal rate of 37 percent, while we have three brackets for LTCG, with a maximum tax rate of 20 percent. Critically, the LTCG tax rates apply only to realized gains – i.e., gains from investments that were cashed out during the current tax interval. Unrealized gains remain exempt from federal taxes – at least until the death of the taxpayer. After that, unrealized gains will remain untaxed for estates valued below the statutory limit of $11.7 million per person or $23.4 million for a married couple. The fact is, relatively few families pay taxes on the bulk of appreciated assets. Also, note that the tax rates on the regular income are independent of the amount of LTCG, but not the other way around. That is, the tax rates on LTCG will depend on the level of taxable income from other sources.

The IRS publishes a trove of data showing breakdowns of taxes paid, tax rates, and incomes by assorted percentiles. As of the latest release (covering through 2018), the top 1 percent reported an average adjusted gross income for the year in excess of $2.4 million and an effective tax rate of 25.44%. [Adjusted Gross Income (AGI) is defined as gross income minus adjustments to income. Gross income includes your wages, dividends, capital gains, business income, retirement distributions as well as other income. Adjustments to Income include such items as Educator expenses, Student loan interest, Alimony payments or contributions to a retirement account.]

(1) A working family is subject to federal income taxes on the family’s earned income; but another family that increases its wealth by the exact same amount through unrealized capital gains would bear no tax liability for those gains.

Although we have a progressive tax rate structure, the three features cited above serve to erode that progressivity. By reducing tax rates at the lower end of the income spectrum we would reinforce or reinstate some measure of progressivity.

A good portion of families with a median income of $62,000 surely find their $7,000 federal tax nut to be onerous – unnecessarily so. An adjustment of tax rates at lower income levels would alleviate this pressure while also reducing the roadblocks to building wealth that these families face. Building wealth, after all, is the prerequisite condition for achieving the American dream. Cutting the tax rate to zero for the bottom 50 percent of households by income would trim federal tax collections by something on the order of $46 billion in the first year, or less; but that tax effect would likely be mitigated over time due to the unleashed spending power of this group.

If we’re going to reign in the spending under the Build Back Better bill, lowering tax rates for lower-and middle-class households should be a part of the ultimate legislation – an approach that could potentially bring the Democrats together. And maybe that compromise would actually end up being better than the original $3.5 trillion package.